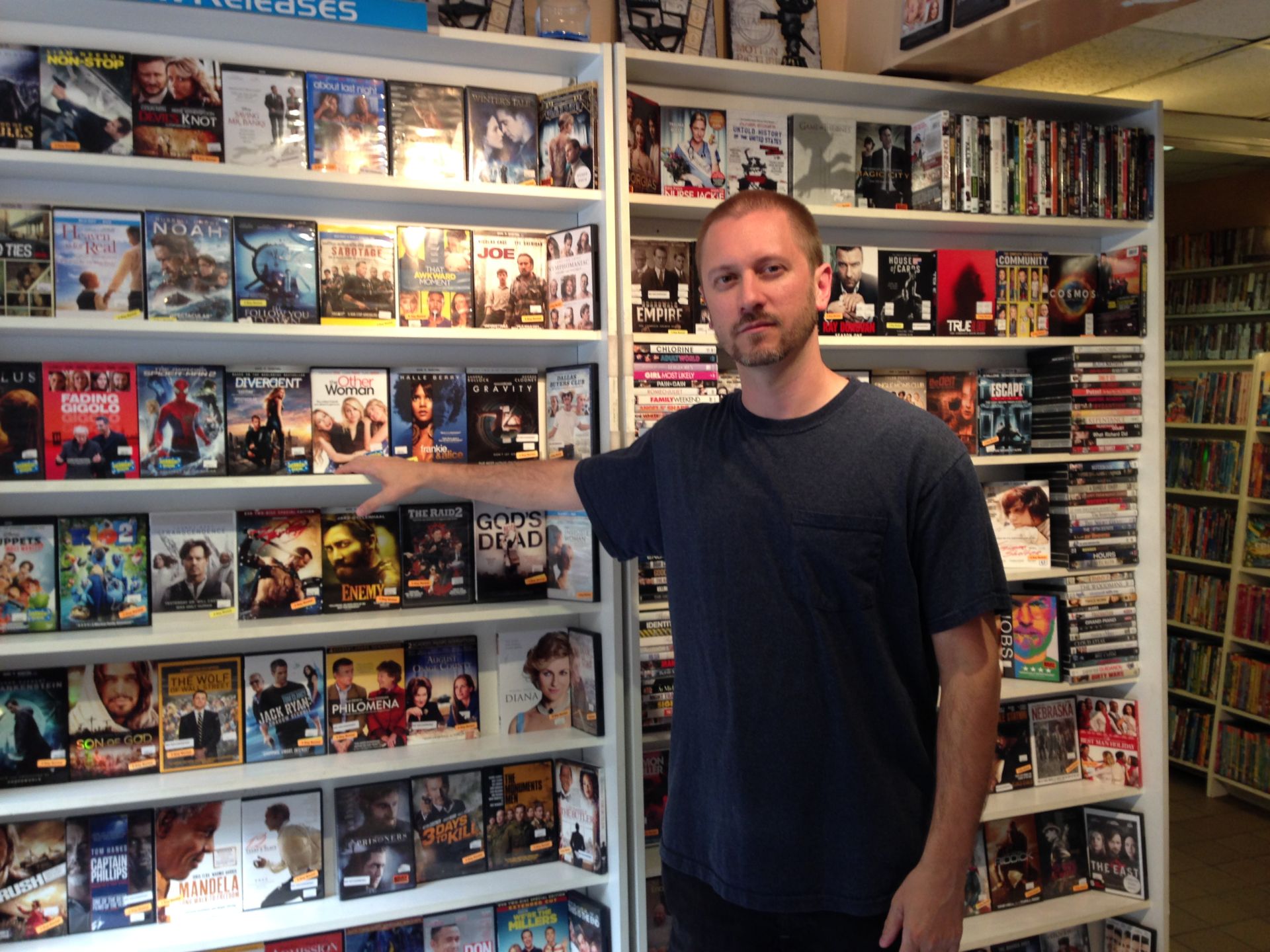 Drew Palermo opened We Deliver Videos in 1999. (All photos by Nikki Lohr)
dispatches 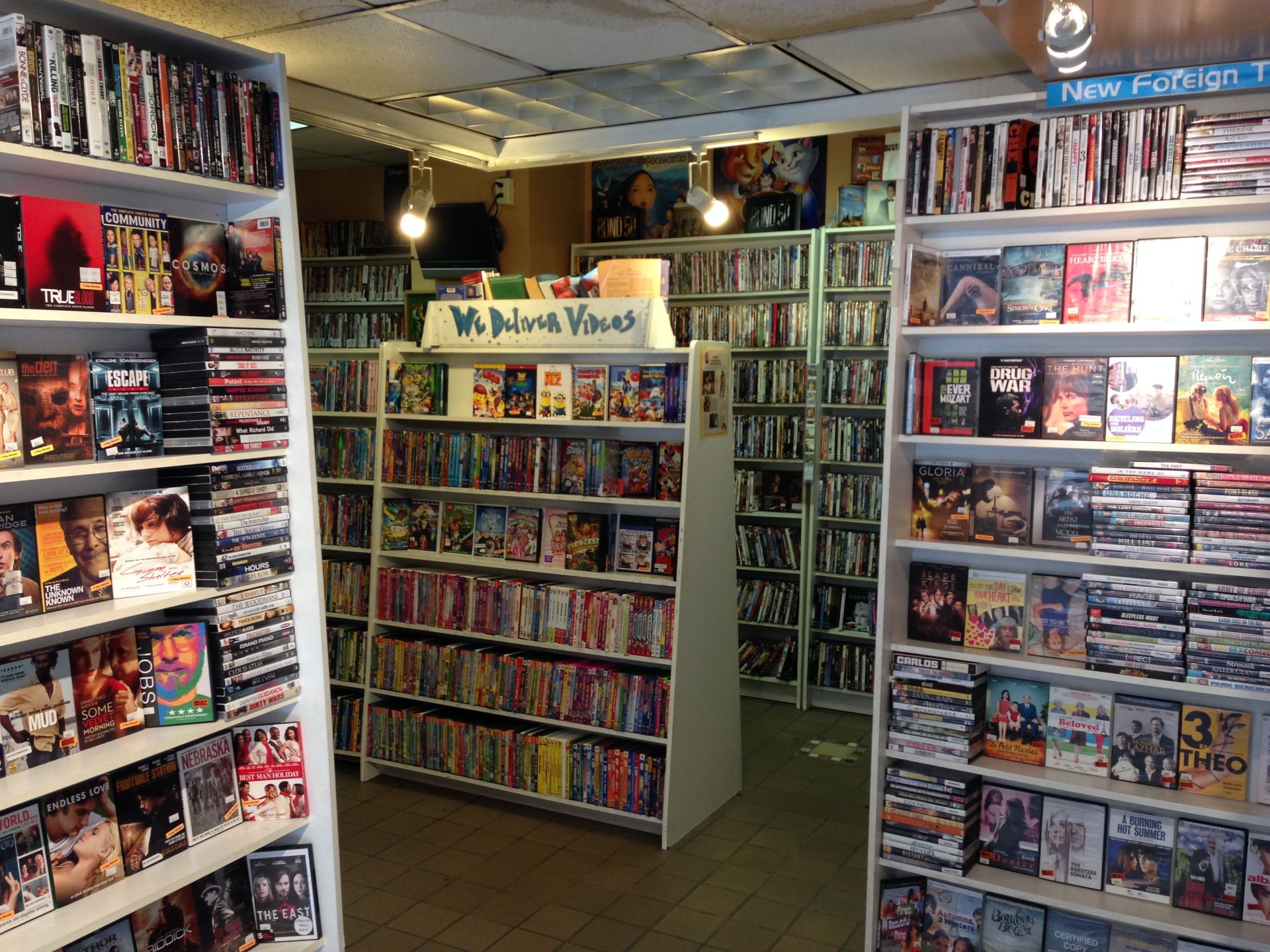 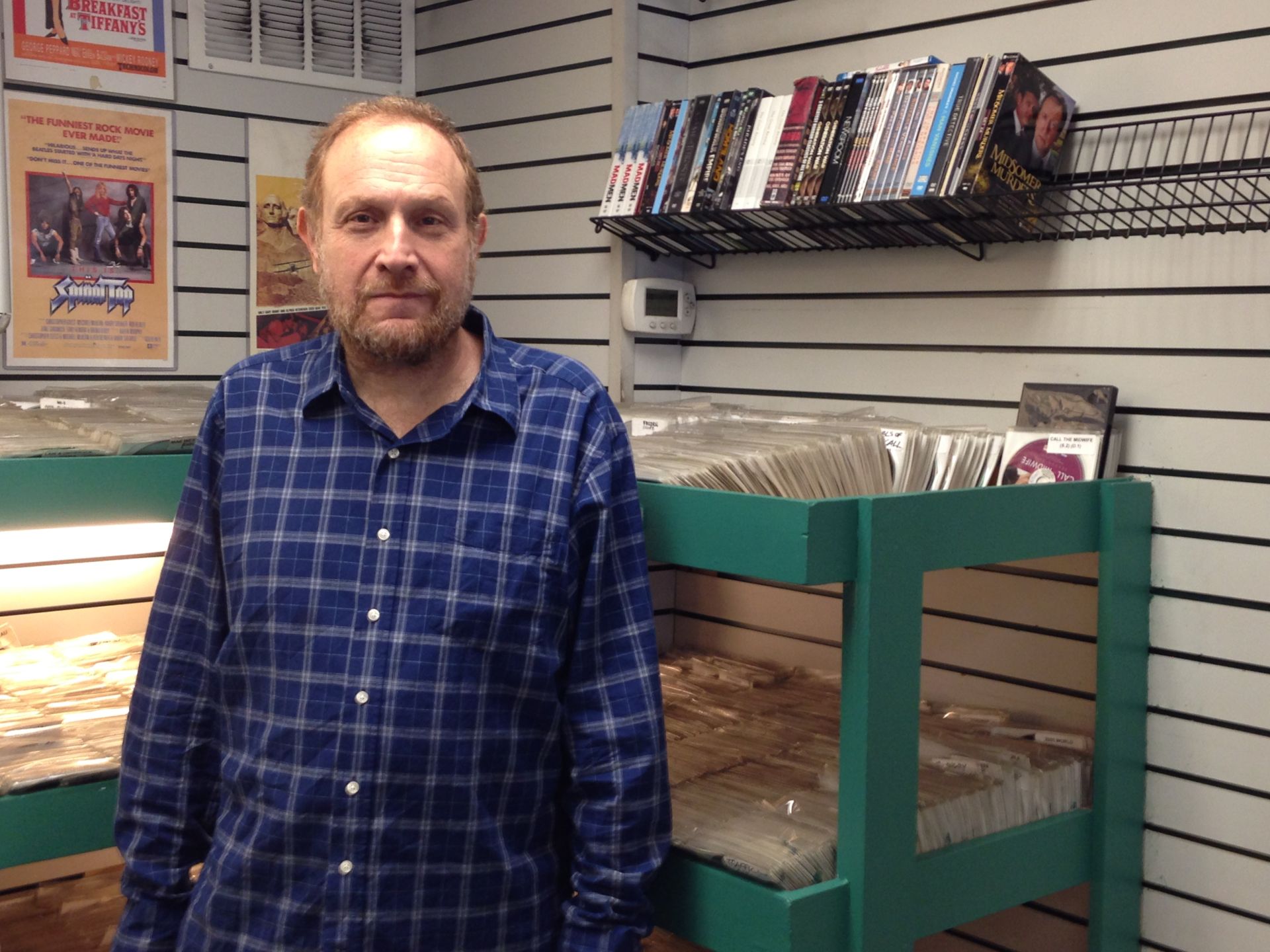 Howard Salen, the manager of Video Room, who has worked there since 1986.
Howard Salen
dispatches 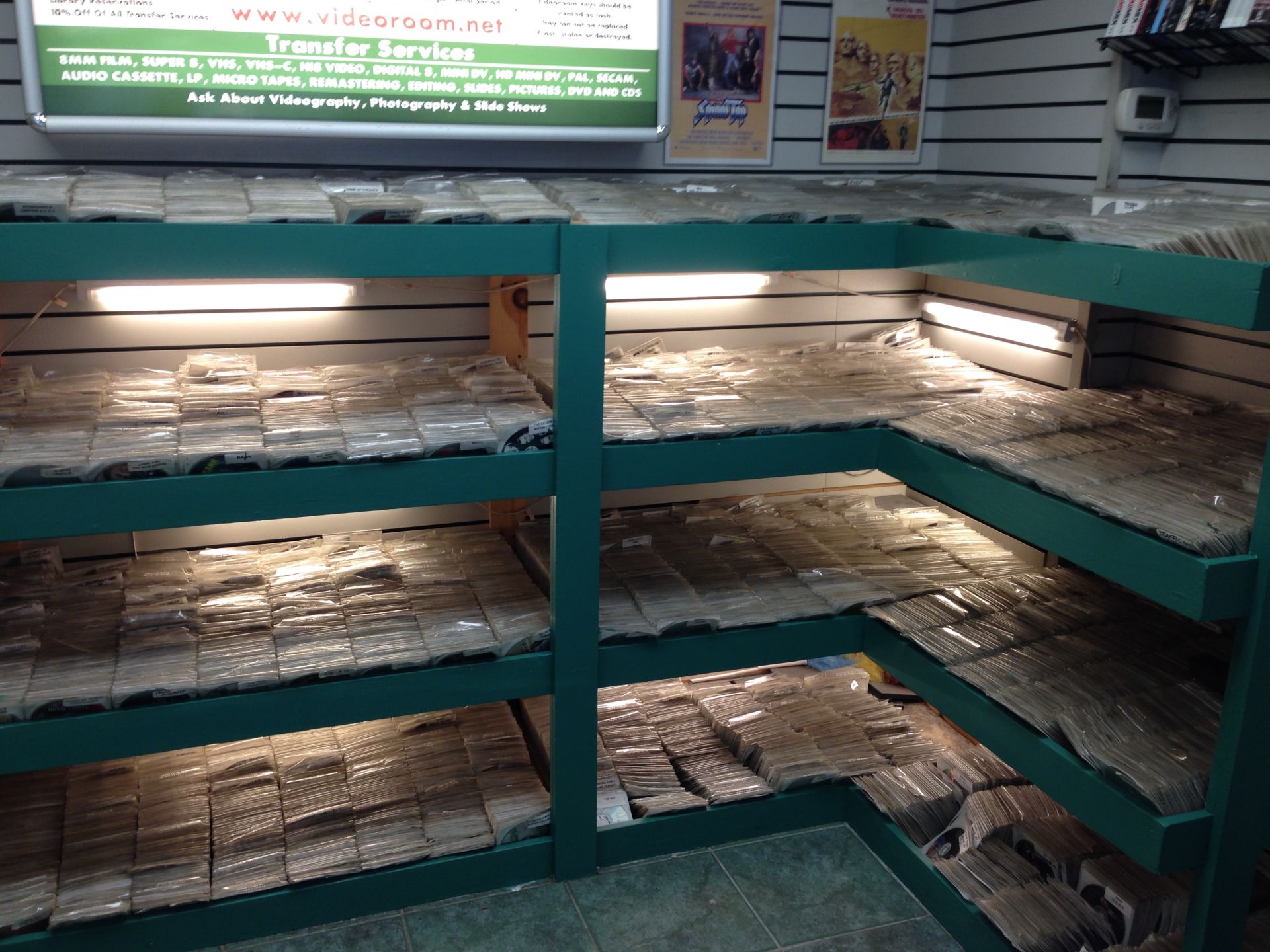 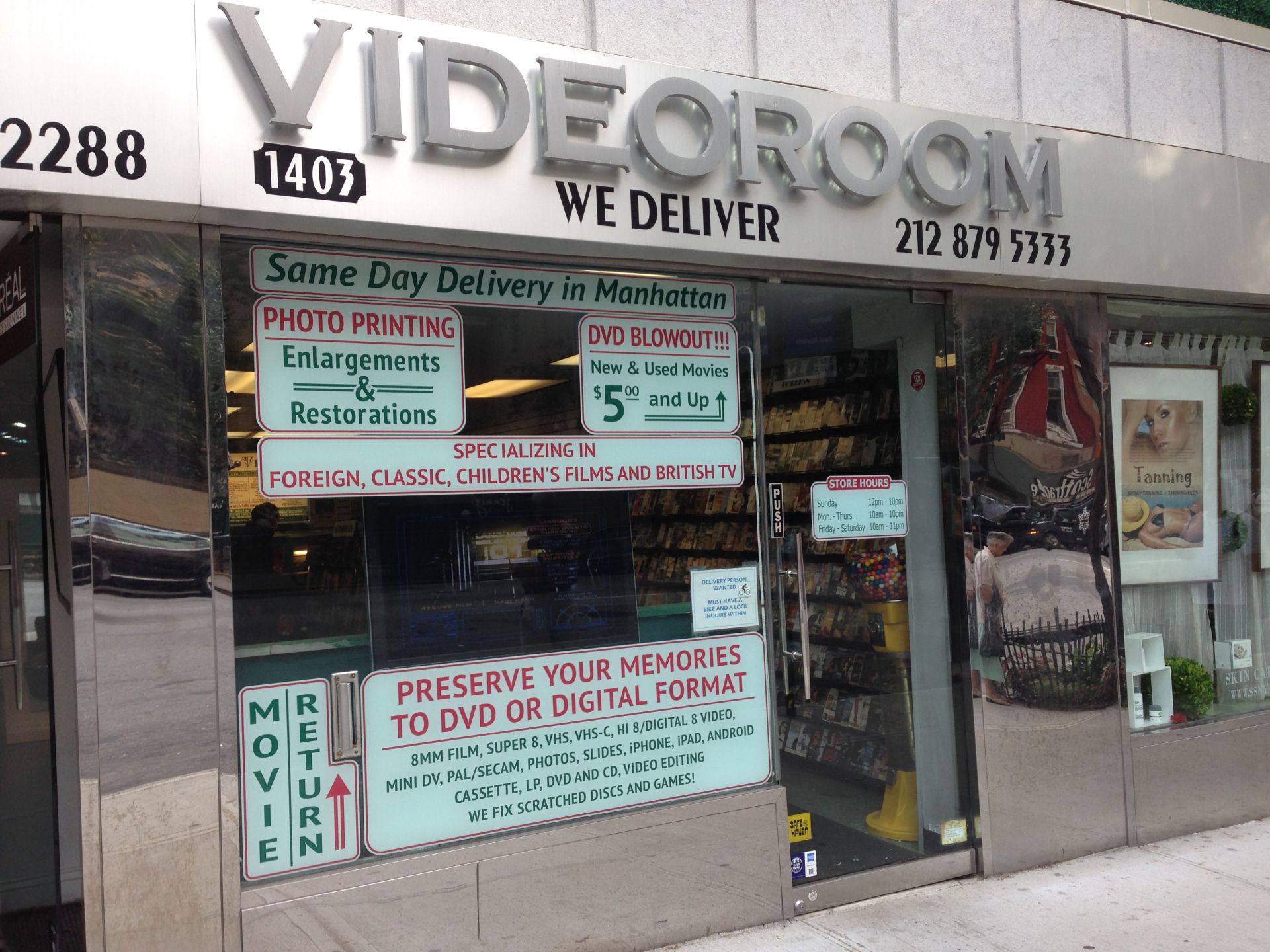 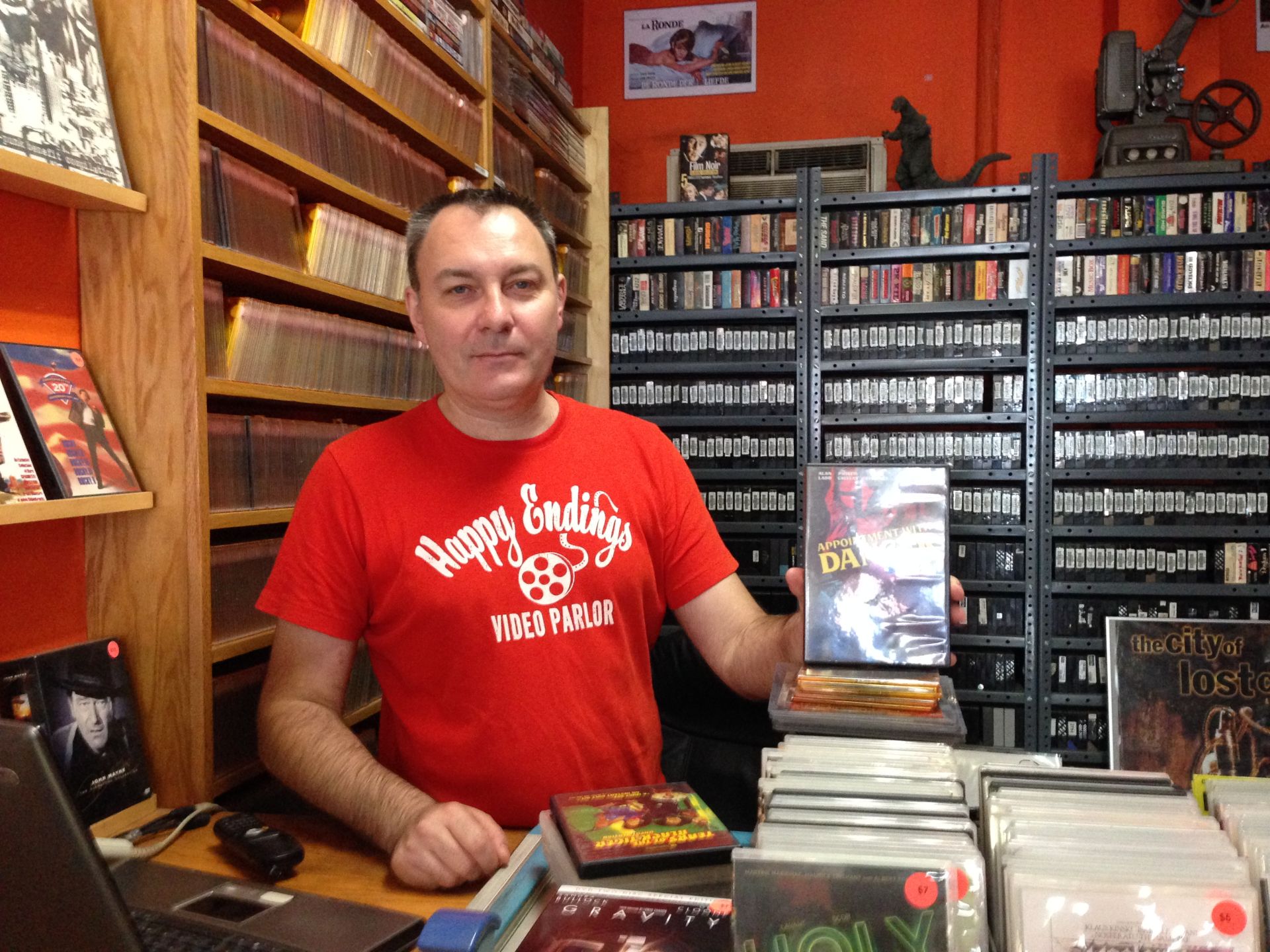 Will Malitek, the owner of Film Noir, opened his store in Greenpoint ten years ago.
Will Malitek
dispatches 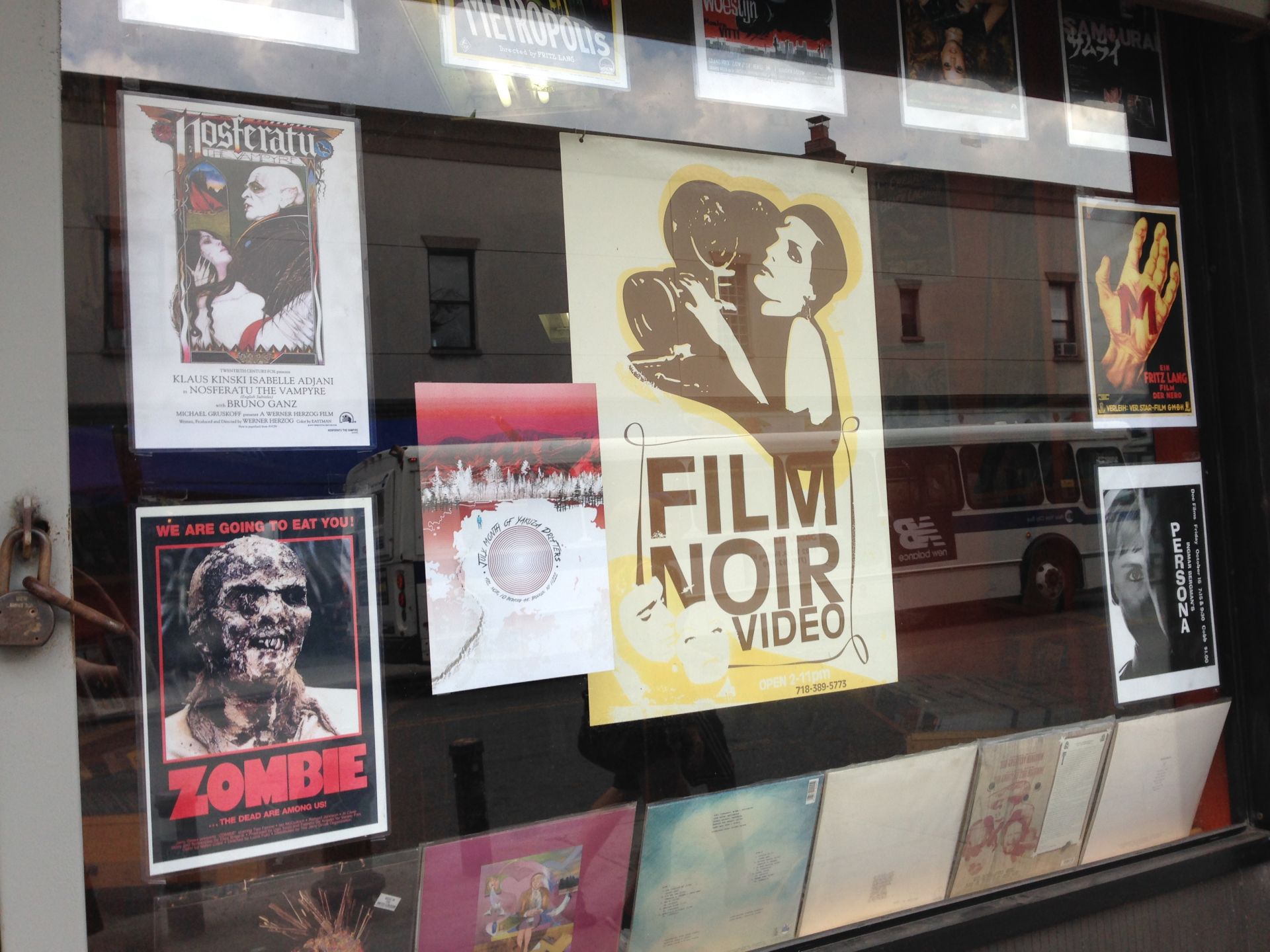 Film Noir owner Will Malitek calls his store "a touch of the past."
Film Noir Storefront
dispatches
Advertisement 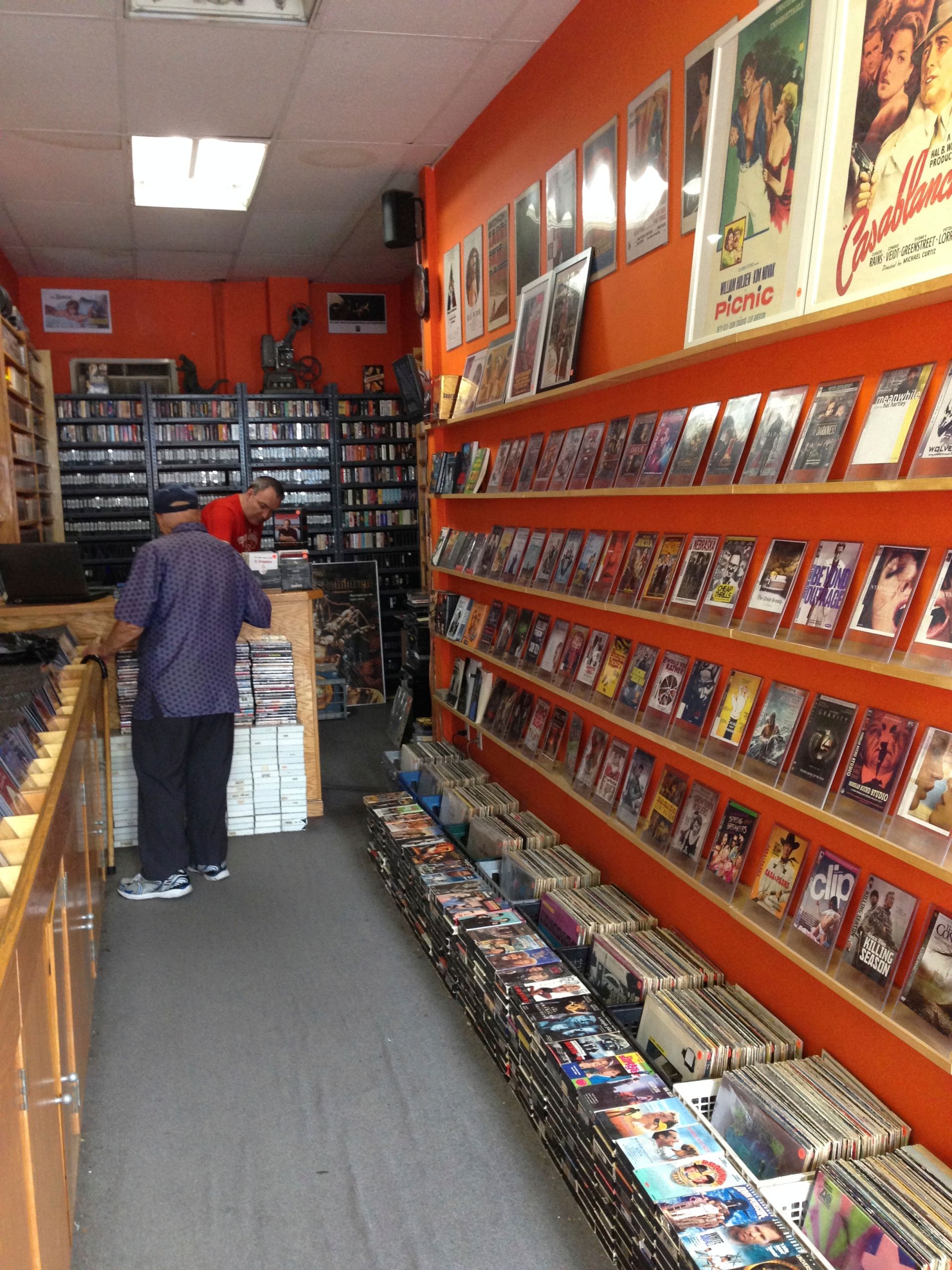 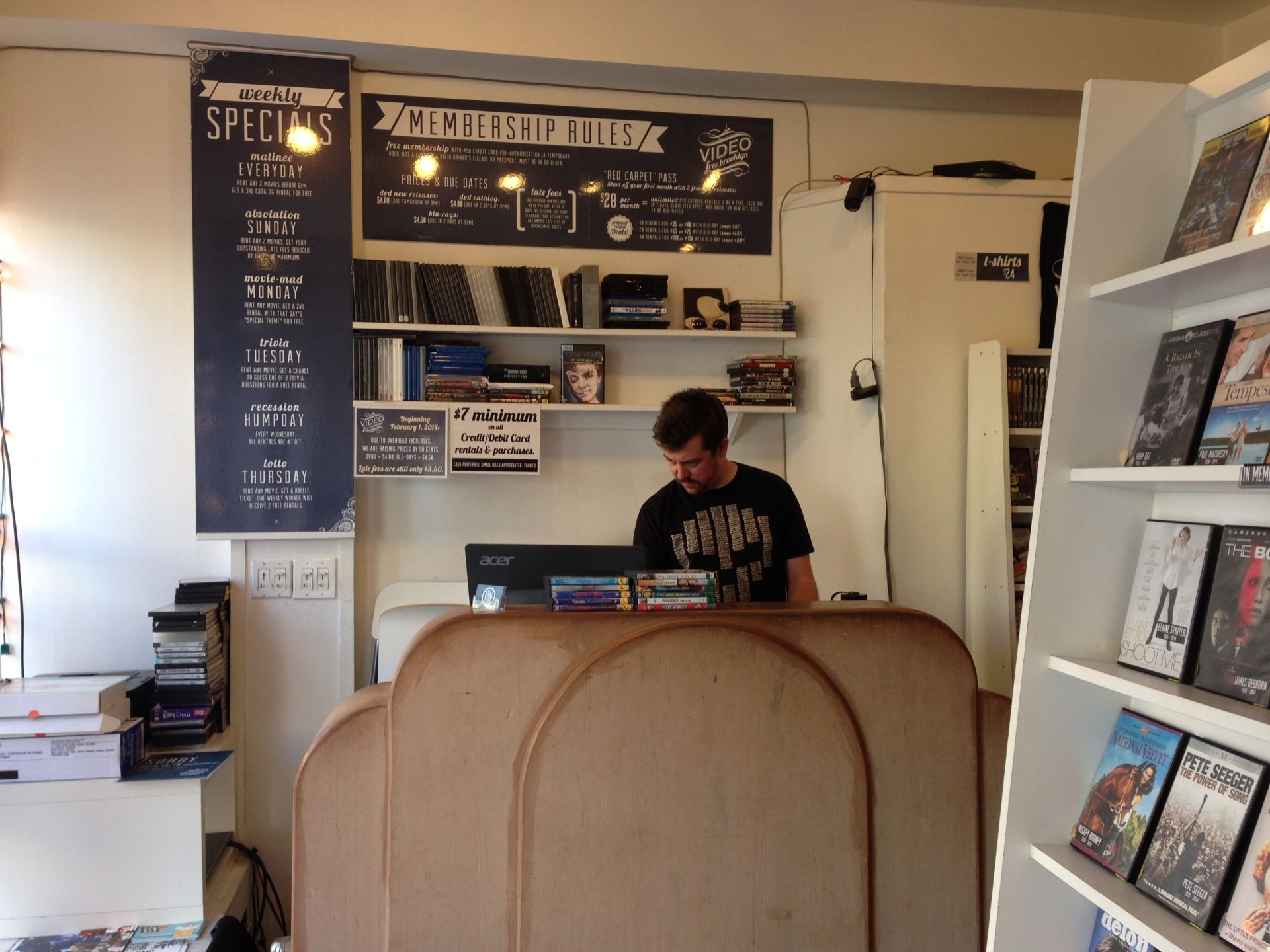 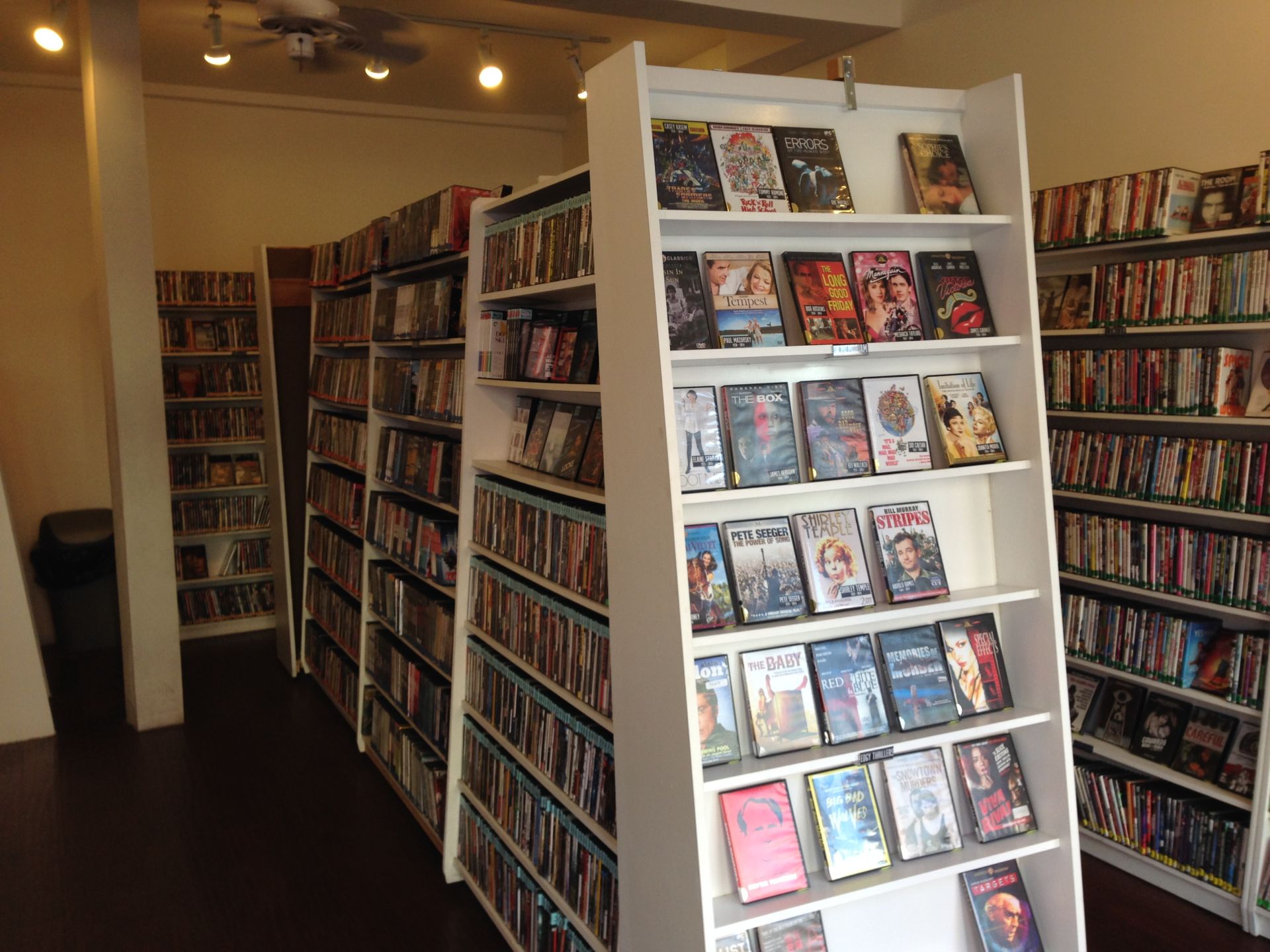 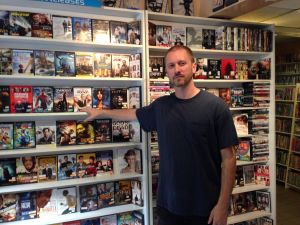 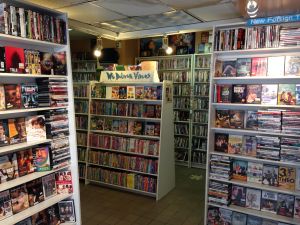 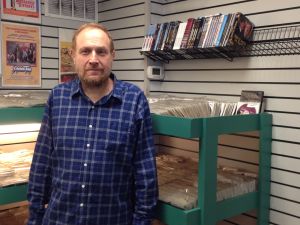 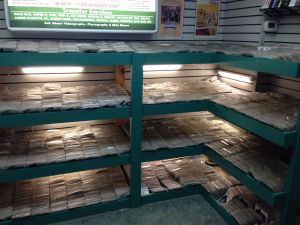 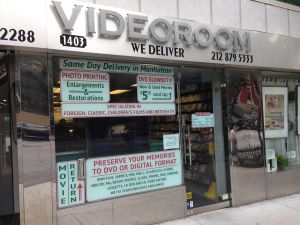 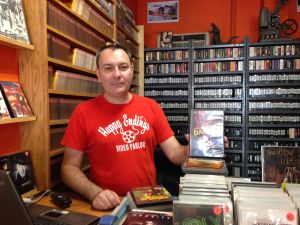 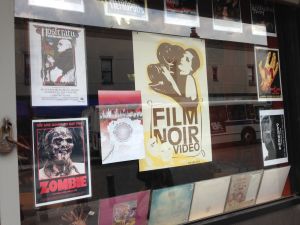 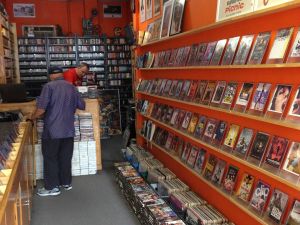 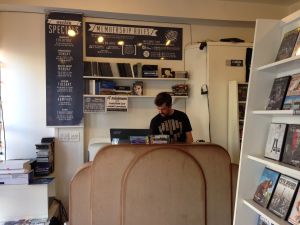 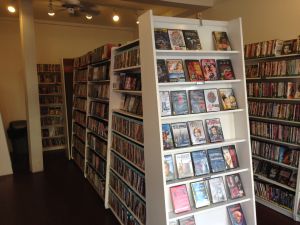 On the corner of 89th Street and First Avenue is something many would consider a delightful relic: a video rental store called We Deliver Videos. Inside, the walls are completely hidden by a glossy rainbow of DVD boxes. Shelves without movies display candy and microwavable popcorn. A Lord of The Rings poster resides in a sleek black frame.

The video store may seem like a dinosaur–and to be sure they are more rare than in the golden age of the 90s and early 2000s. Between 2010 and 2012, the number of video/disc rental stores in New York state went from 451 to 198 according to the U.S. Census Bureau. That steep two-year decline makes the stores look like an endangered commercial species. This past year has seen the shuttering of NYC staples, from Chelsea’s Alan’s Alley on July 7 to Kim’s Video in the East Village, which is set to close at the end of August. It isn’t any better across the nation. Blockbuster, which peaked a decade ago at 9,000 locations worldwide, closed the last of its stores this January.

And yet, there are heroic survivors in NYC. Drew Palermo, who opened We Deliver Videos in 1999, is among them. “Look I’m not going to lie to you, it’s definitely slowed down,” said Mr. Palermo, thumbing through some of the store’s almost 51,000 discs. “But we’ve been doing this for 15 years and my money’s still here. We’re signing up new members all the time.”

In a video world dominated by Netflix, what has made some stores hang on while the Blockbusters have folded? Location, loyal customers and owning hard-to-find films are a few answers. But talk to any two independent video storeowners in the city and they’ll offer a variety of reasons for their success. The common denominator? A deep understanding of their neighborhoods and customers.

That insight is what has allowed Video Room, an Upper East Side mainstay and Manhattan’s first video store, to keep going for over 35 years, according to its manager, Howard Salen. He has worked there since 1986, and describes the store’s customers as “intelligent Manhattanites” who tend to be older. So they curate to just that: offering a wide array of foreign and classic films, as well as new releases by the Woody Allens and Wes Andersons of the film industry as opposed to the Michael Bays. They also have a secret weapon–a video transfer service. Customers bring in home videos of their families that were filmed on VHS and Video Room converts them to DVDs or other updated digital formats. For Video Room, appealing to a younger clientele is a lost cause. They see video stores as antiques. “Ten years ago they’re everywhere,” said Mr. Salen. “Now they’re from a time capsule.”

Will Malitek, who opened his Greenpoint video store Film Noir about ten years ago, would disagree. His business survives off young customers – those of the artsy Bedford Avenue scene. Mr. Malitek is the type of cinephile who thinks Japanese director Yasujirō Ozu is mainstream, and his collection mirrors that mindset. Though he has the occasional big film–a copy of Cowboys & Aliens, for example–he specializes in cult movies and obscure foreign films. He used to have a new releases section but got rid of it once Netflix arrived. But he doesn’t see Netflix or on-demand as huge competitors since most of the films he offers simply can’t be found elsewhere. “Even if you do find some of them, you’re not going to find all the extras and that’s what my customers want to see,” said Mr. Malitek.

Aaron Hillis, the owner of the 375 square-foot Video Free Brooklyn in Cobble Hill, takes a similar view when it comes to the digital age. As a freelance film journalist who has written for The Village Voice and Time Out New York, he comes across obscure films not available on Netflix or elsewhere. But he’s quick to add that the store offers mainstream releases as well. “We’re not snobs here,” he said.

Even for those films, Mr. Hillis doesn’t see online availability as competition. He gets new releases before Netflix and will have them after Netflix recycles them, he explained. More than that, he says that watching films online doesn’t fit with the mentality of his customers. “When you check out a movie that you have to bring back, it gives the experience more weight and importance than a click,” he said. “And there’s nostalgia–people miss being able to talk to that film nerd behind the counter.”

It’s part of why Mr. Hillis doesn’t offer delivery–he wants his customers to have the experience of browsing through tangible titles. For the same reason, Film Noir also does not offer delivery. Video Room and We Deliver Videos love their walk-ins, but for them, delivery is vital. Video Room is able to do business all over Manhattan with a delivery range that spans from the southern tip of Manhattan to 110th Street, east to west.

Mr. Palermo estimates that 50% of We Deliver Video’s business is made up of online and phone orders. For him, the digital age has had benefits. The store’s website has increased business, and even though We Deliver Videos thrives on new releases, Netflix and its brethren haven’t had a detrimental effect. Mr. Palermo thinks it has to do with the neighborhood’s desire to support a mom-and-pop business. Many of his customers want the face-to-face interaction and suggestions that an online algorithm can’t provide. Amusingly enough, one of the store’s best-renting TV series is House of Cards. “We can’t keep it on the shelves,” Mr. Palermo grinned. “I chuckle every time someone wants it and it’s not in stock. But I don’t say anything.”

All the stores say they don’t know how they would survive in another neighborhood, let alone outside of New York City. The city’s film culture is key. When Mr. Hillis bought Video Free Brooklyn in 2012, a customer in the store congratulated him–she turned out to be the producer of Moonrise Kingdom. Zoe Kazan and Paul Dano are also frequent customers of VFB. Video Room says they have a laundry list of customers who are big shots in the movie business, though they didn’t give out names.

Independent ownership has also been key to all of them. It lets them evolve to suit the needs of their neighborhoods. Mr. Hillis has increased his number of titles from 5,000 to 8,500 in the past two years. Mr. Malitek is doing so well that he is planning to open a movie theater in Brooklyn within the next few years, which, like his store, will screen only offbeat films. Even Alan’s Alley has been reincarnated, now as a fifth-floor walk-up shop in a building on 25th Street and Seventh Avenue.

Still, times are different. Video Room used to be almost three times the size of its current 79th Street location. “It would be nice in a perfect world to have two thirds of this block,” said Mr. Salen “but those days are over.”