It’s a feeling us New Yorkers all know well, the dread as one descends into the furnace that is the subway during summertime. Steamy, sticky and unbearably hot, commutes on the subway from June to August feel not unlike stepping into a sauna.

Last month, the pranksters of Improv Everywhere transformed Manhattan’s mass transit into just that and released the video of their escapades today.

34th Street station (at a cool 95 degrees) became the 34th Street Spa for an hour in the group’s latest trick, complete with cucumber and lemon , hot stone massages, and towels for straphangers to relish in the sticky heat.

For extra steam? Improv Everywhere created a misting station along the NQR platform where spa patrons could receive a little refresher, straight from a circle of white-clad “spa employees” with spray bottles.

Known for their extravagant public pranks–ranging from freezing in Grand Central Station to filling a Best Buy store with blue polo-wearing patrons–Improv Everywhere is led by comedian Charlie Todd. Mr. Todd first had the idea for the prank over 10 years ago, but finally made it a reality in July.

“The first time I stepped into a car with broken air-conditioning after moving here in 2001 I immediately thought, my god it’s like a sauna in here,” he told the Observer via email. “I’m sure I’m not alone [in] that. I’ve also spent many late nights on subway platforms heading home in the summer over many years. It’s the worst!”

The comedy group was founded in 2001 and has been running amok across Manhattan ever since.

“We try to stage things that brighten people’s days and give everyone a laugh,” Mr. Todd said. “Who wouldn’t want a cup of ice and a towel to wipe the sweat away on a hot day a subway station?” 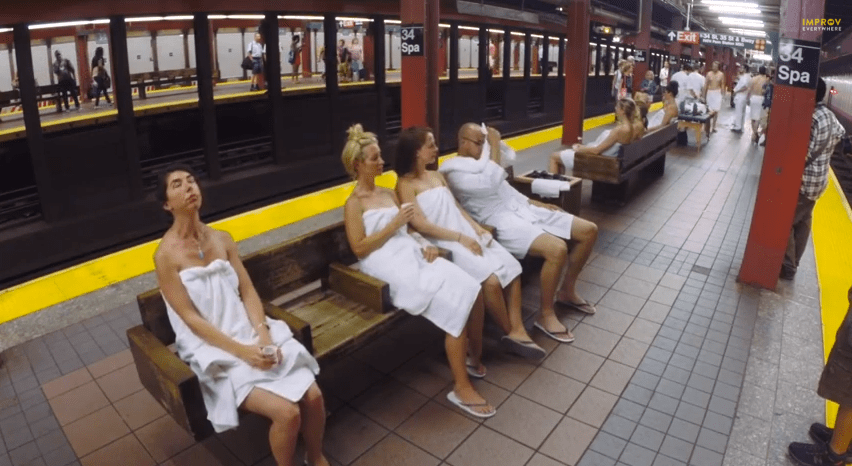