A U.K. teen has reportedly become the first fatal victim of the Ice Bucket Challenge, an Internet trend designed to help fight a deadly disease.

Cameron Lancaster, 18, is believed to have completed the ALS Ice Bucket Challenge, and then jumped feet-first off an 80-foot cliff into the shallow at an abandoned quarry, the Telegraph reports. His body was found after a four-hour search.

“Cameron died in a tragic accident,” Mr. Lancaster’s family said in a statement released by police. “His death is such a great loss. During his short life, he touched so many people with his friendliness, kindness and thoughtful generosity of spirit. He will be hugely missed by his family and friends.”

Partakers in the charity initiative have recently been carrying out some rather extreme versions of the challenge, the Telegraph notes — like the woman who did the challenge while seated on a horse, and was unsurprisingly thrown from said horse as soon as the animal felt the ice .

Extreme social media stunts have been worrisomely popular lately; earlier this month, New Jersey issued an emergency bulletin in regards to the dangerous “Fire Challenge” trend, wherein teens are lighting themselves on fire and uploading the videos to social media. Come on, everyone — no amount of Internet fame is worth personal injury or freaking death.

Police are currently investigating Mr. Lancaster’s death to “establish the full circumstances of what happened,” a Police Scotland spokesperson is quoted as saying.

For those of you who’ve yet to complete the Ice Bucket Challenge, let it be known that we’re totally okay with your run-of-the-mill videos on your front lawn or in the shower. 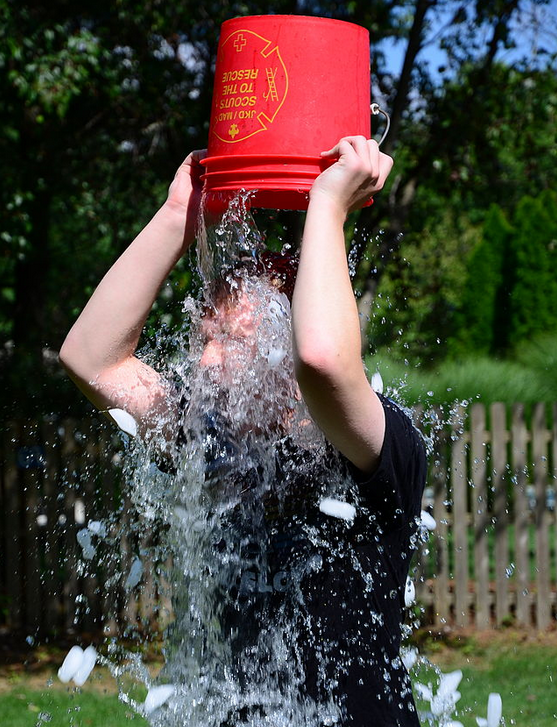