Ahhh wedding season. The sun is shining, love is in the air and sound of wedding bells can be heard faintly in the distance (*cue the record scratching sound effect*). Okay, so I only know it’s “Wedding Season” because I saw it on the cover of a magazine while standing in line to buy a six dollar bottle of wine #TheSingleLife. I couldn’t help but stare at this magazine cover for a long time. Luckily, I live in New York City and the inordinately long amount of time spent in check out lines lends itself to such musings. I got to thinking about all of this marriage business. The bride-to-be in the latest Us Weekly spread, Desiree Hartsock of The Bachelor (and Bachelorette) was beaming, dressed in a shimmering white gown that oh-so-perfectly matched her impeccably white teeth. (Note to Self: buy white strips.) She looked perfect. One could only assume that the person waiting for her at the end of the aisle would be equally as perfect with equally bleached teeth, and the flawless couple would sail off into the sunset to celebrate their sacred union.

These fluffy delusions of marriage lasted about as long as my walk home. At which time I turned on my TV–okay, I turned on my laptop and broke into my neighbor’s wifi–where I discovered that there was a rather large disconnect between the quintessential bride on the magazine and the horrors of reality TV show marriages. One example – and I do mean one, because there is no shortage of over the top wedding programs on TV right now- was Married at First Sight on FYI.tv, which appeared to put an audacious, questionably ethical, spin on televised marriages.

I couldn’t help but marathon the first four episodes of Married at First Sight, the premise of which is exactly what it sounds like.The show–which features 3 couples, 2 probably loosely qualified “experts” and a boat load of awkwardness– follows total strangers as they meet for the first time while walking down the aisle. (I imagined their mothers were brimming with pride, but then again I was feeling a little punchy after my third glass of $6 Malbec.)  Luckily, this show has no real regard for marriage. If the couple doesn’t like each other after one month, the show allows them to divorce.

While many states in this country still don’t recognize same-sex marriage, Married at First Sight is not technically illegal anywhere in the US. (Despite it taking place only in New York.) Anyone arguing that same sex couples should not get married because it’s important to uphold the “sanctity” of marriage should watch this show.

The first bride, Jamie, began to cry when she first laid on her very-soon-to-be-husband Doug, though these were not tears of joy. These were the tears of total panic, as the bride later revealed. After admitting “He’s not exactly a knock-out,” she continues to cry and lament her hasty decision to become legally obligated to a complete stranger. (Who could have foreseen this scenario??)

Next, Monet married Vaughn and admitted that looking into her now-HUSBAND’S eyes was “an uncomfortable thing to have to do,” explaining that it “felt like an invasion of personal space.” Did someone tell her that it’s universally advisable to think of issues like this before you promise to be with someone as long as you both shall live??

Then Doug and a still-weeping Jamie pose for uncomfortable wedding photos with a professional photographer. Not surprisingly, their wedding photos look very different from the Bachelorette I saw on the cover the magazine, although to be fair, Hartstock had a whole six months of dating her husband on national television before deciding to tie the knot.

At this point in the show, I became very happy. Possibly because it helped put my own awkward love life in perspective, but more likely because the wine was working. Meanwhile, Courtney and Jason got married and the three couples awkwardly attended their respective receptions. The pimps “relationship experts” proceed to narrate the awkwardness periodically throughout the show, explaining the not-so-hard to imagine uncomfortable moment that will occur when the now married couple–having known each other a mere 3 hours–get back to the hotel room (which is of course candle lit and sprinkled with rose petals).

In the last episode I could stomach, I learned that Doug and Jamie still haven’t kissed, Monet and Vaughn have done a lot of things I didn’t exactly care to know about and Courtney and Jason actually believe thier marriage will work. The latter is of course more confusing than the first two scenarios combined. I’m still having trouble figuring out which is more unsettling: the fact that shows like these are responsible for obliterating any and all traditionally upheld archetypes of marriage or the fact that I’m probably going to watch next week’s episode. 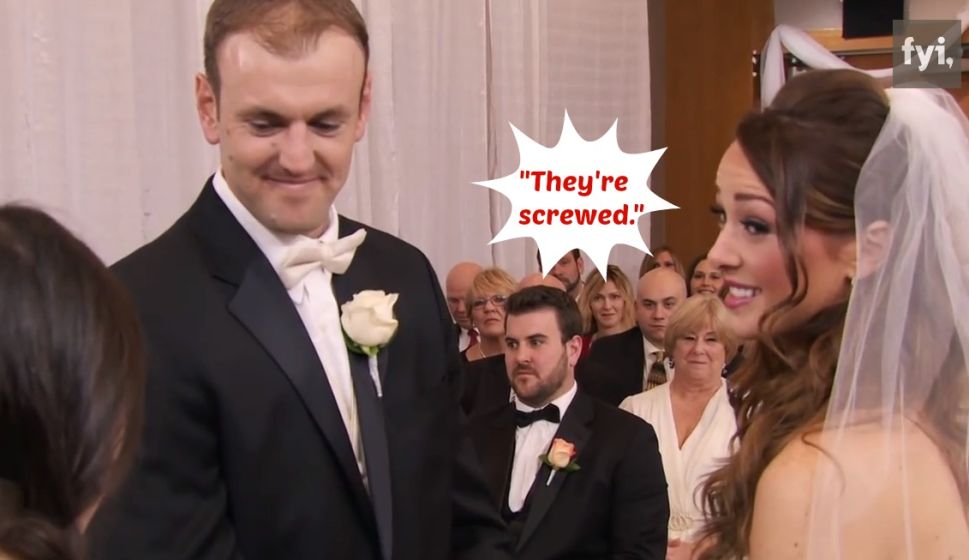