Now that Craig Ferguson’s CBS replacement has (allegedly) been found, America is up in arms over the choice in James Corden, despite the fact that no one who isn’t a fan of British comedy or musical theater has heard of him. (Yet. He’ll be playing the Baker in the Into the Woods movie this Christmas.) Apparently the creator of Gavin & Stacey, The Wrong Mans, Horne & Corden is known in the British press as a little bit of an entitled jag-off, and you know how well that goes down in the US late night scene. (Graham Norton, I’m looking at your weird face.)

But who else could fill Ferguson’s Scottish kilt? We found 8 other performers who have a proven track record in the Variety genre.

Look, ventriloquism isn’t really our thing either, but after watching Conti and her depressed hand puppet Monk on Christopher Guest’s Family Tree, I became obsessed. Like, I’ve been practicing my Monk voice all day every day since last July. Plus, look at her! She’s a total cutie, and her weirder acts are already marketed to an audience used to a skeleton band leader.

[youtube https://www.youtube.com/watch?v=iX0TjGEBITg]
The co-creator of Peep Show, The Mitchell and Webb Situation, That Mitchell and Webb Sound and recently That Mitchell and Webb Look, the man we know as Mark Corrigan is also known as “The Best Comedy Panel Show Guest” in the world, according to Radio Times, adding “Whether he’s putting himself in the position of insurance salesman to the Russian Army, pondering how Beethoven could be used to sell soufflés or assessing the suitability of the name “Proctor & Gamble” for a new-born child, you’re guaranteed a stream of unwilting wit, a torrent of failure-based monologues that combine self-deprecation with pedantry, and smut with one-upmanship.” And that’s saying something, because the Brits love their panel shows.

Robert Webb
[youtube https://www.youtube.com/watch?v=CGyzv5sqNK0]
Okay, while we’re at it, let’s throw Mitchell’s long-time collaborator Robert Webb in the mix as well. He was great on Peep Show as Jez, and he and Mitchell are such a team that they’re the British version of those Mac/PC commercials. Also, Webb was the host of Groundbreaking Gags, which was sort of the English equivalent of Tosh.0, as well the anti-I Love the 90s mini-series, called 10 Things I Hate About. In the above clip, he basically does a BBC version of those “Everything Wrong With” Youtube series.

[youtube https://www.youtube.com/watch?v=xmBCh76_qWE]
Look, I promise I’m not just going down the list of my favorite Peep Show actors. After all, you probably know Paterson as Wayne, the cult leader with the magic hugs on The Leftovers. But Joseph’s resume boasts an impressive range: sketch, variety, comedy, Shakespeare and nerdgasms (Doctor Who and Hyperdrive). And he can sing, as evidenced above in the infamous sketch “Numberwang,” from one of those Mitchell & Webb projects. (He’s also in “Wordwang,” btw.)

Hugh Laurie
[youtube https://www.youtube.com/watch?v=xVRZQaLwiz4]
We’re just assuming that Stephen Fry is too busy being better than us/playing the Prime Minister on 24. Though it might be jarring to watch Dr. House speak in his native brogue, we’ll all get over it if he promises to play the piano in every episode.

Noel Fielding
[youtube https://www.youtube.com/watch?v=qLnlYwqd-1Q]
Obvious choice: he’s a cult favorite for his role on The Mighty Boosh, and he’s a team captain on Never Mind the Buzzcocks, which is a weird show the Brits are very, very into. He’s goth and irreverent in the same way Russell Brand is, which could be a good thing or a terrible thing. (What ever happened to Brand X, after all?)

Matt Berry
[youtube https://www.youtube.com/watch?v=9dgwxLbZXhk]
Was ever a man made with a voice more appropriate for hosting a late night variety show? You might remember him from Garth Marenghi’s Darkplace, a faux soap opera that The Spoils of Babylon totally ripped off, as well as The IT Crowd. His singing rivals those Flight of the Conchords guys, if you ask me.
[youtube https://www.youtube.com/watch?v=D3rNBAMt-kg] 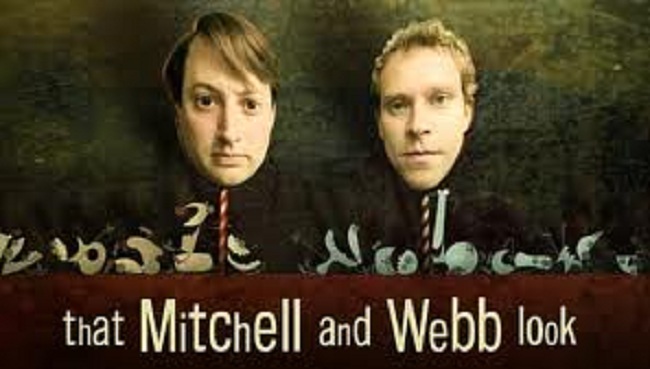