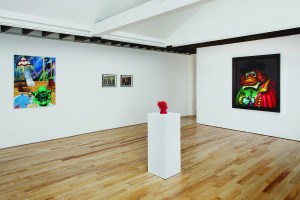 Daniel Gordon’s Blue Face II, a photograph of overlapping rectangles of color, reads as a candid revelation of personality in the normally silent material world. A long shadow hangs down like a monocle into a staticky blue the color of a humming TV, crossing a brief curve of darker color that’s either the shadow cast by a pixelated blonde toupee or the photographic residue of a former shadow. In the middle are two overlapping noses; to the right, slashes in orange static; and to the left, a blurry ear turned in abstract profile like a hieroglyph. Ripped edges add a cottony, cloud-like texture. In Zinnias, a bouquet in a crumpled, blurry vase—pixels become almost painterly the second time you see them—casts a live shadow on the wall. The effect is powerful, but as with the original Crystal Palace in Hyde Park, there’s something morbidly nostalgic about the project; Mr. Gordon destroys his models after shooting.

The face of Peter Saul’s beautifully dippy blue Watchdog, colored pencil and acrylic on paper, is covered in a maze of thick, blue-gray lines that work simultaneously as folds of floppy skin, rivulets of sweat, figurative dismay and Paschal marks of Cain. Purple and gray lightning surrounds the beast; an orange halo like an underwater racetrack wobbles overhead.

A 1964 pencil drawing by Robert Indiana consists of angled sienna lines like stiff fur forming a manhole cover or medallion lettered The American Way: Sing; Stan VanDerBeek contributes a series of robustly-constructed, tunnel-vision collages; and Van Hanos’ Dismal Woods, a handsome six-foot oil of a stand of bare trees in the snow, looks back to Klimt, but sets a viewer’s teeth on edge with its thin, tautly-stretched opacity, just like a photograph. In Mr. VanDerBeek’s 1964-5 Untitled (Facescapes), four to six faces of older white men, one of them halved as if with an executioner’s hood, another overhanging a tiny but almost audibly bleating little mouth, revolve like the blades of a fan against a background of eerie purple smoke.

Anya Kielar’s Les Doubles Dames is a seven-foot-tall plaster-white rack of dismembered female body parts—or at least, that would be the neatest way to describe it if its tone, thanks both to its color and to the parts themselves being more allusive than specific, weren’t so carefully noncommittal. A head made of rope could be either killer or victim—or it could be a janitor’s unsettling joke with a mop. Two breasts hang separately, also in rope, like quantities of undifferentiated flesh, and two inverted feet flank the uneasy head like horns. The figure repeats, upside down, as in a playing card.

Looking down on this one or these two figures is an epically odd, untitled construction by Johannes VanDerBeek. A speckled, nocturnal blue paper pulp rock roughly in the shape of a pinched and pointed corset, with raised peaks like cheekbones, is affixed to the wall. Balanced atop it, a second oval rock, lighter in color, marked with blue and white patches like mold. The lady’s hat, cocked like a Japanese emperor’s, is a long black spatula. In a collage by Joseph Cornell, a cat in a ruff collar presides, above the brand name L’ABEILLE, over a demonstration of ascending cubes on a game-table green counter. Providing a very welcome flash of unself-conscious pleasure, as it appears in a collage, on a section of painted wooden fence, and on the seat of a metal folding chair, is Ray Johnson’s baguette-eared, floppy-nosed, egg-eyed, pancake-flat, seen-from-above bunny.