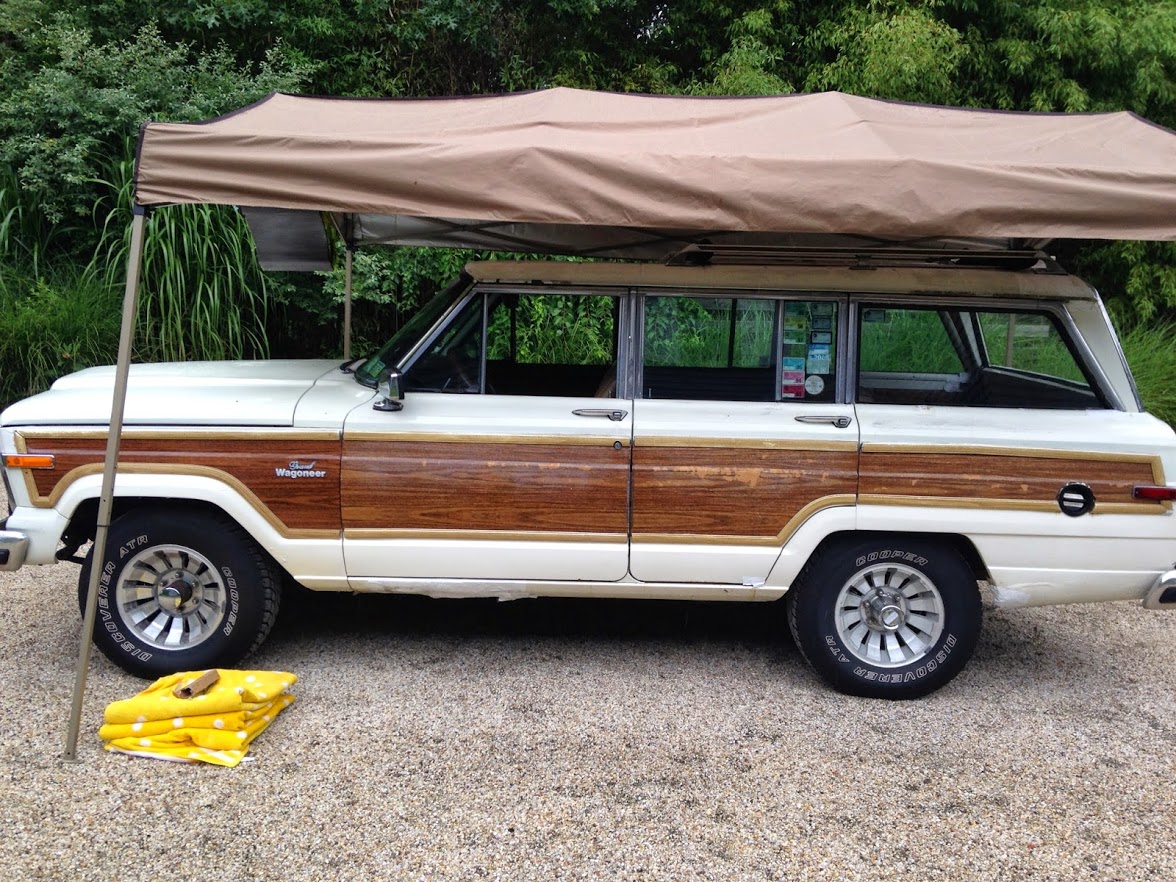 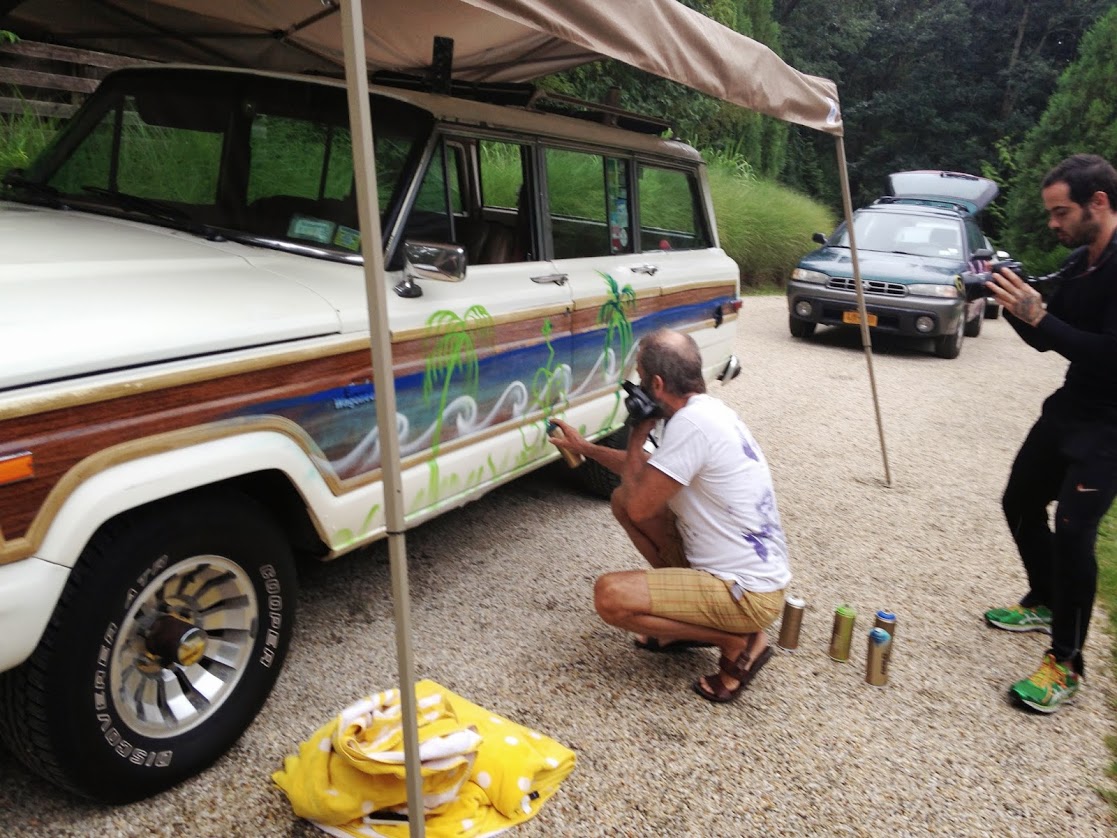 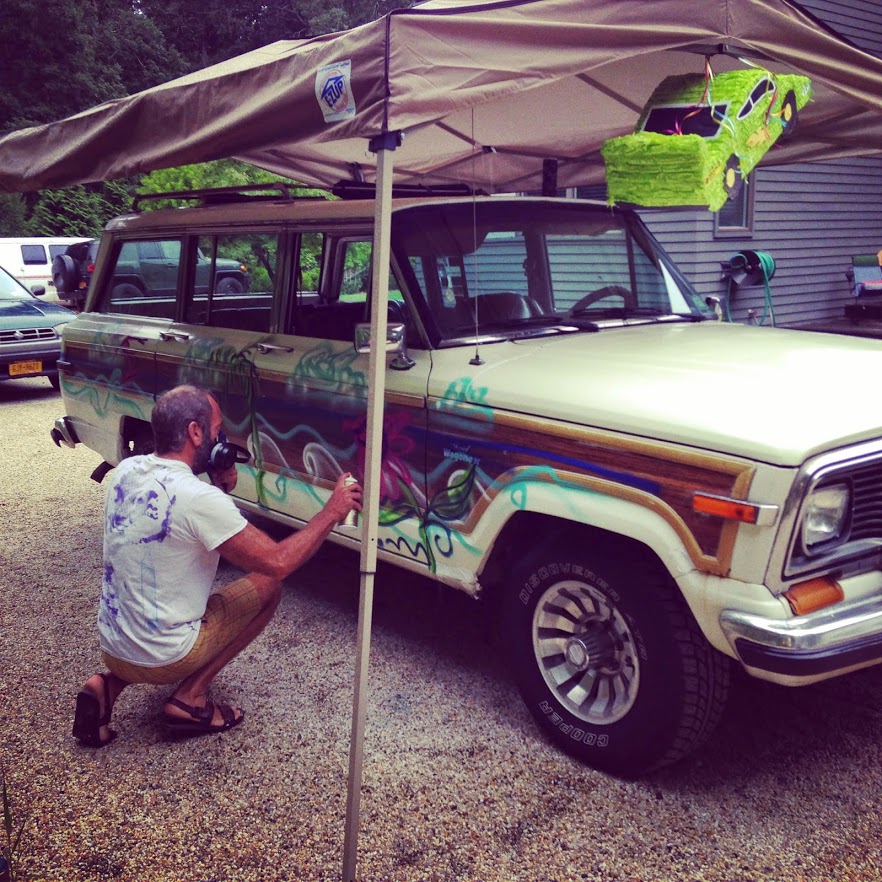 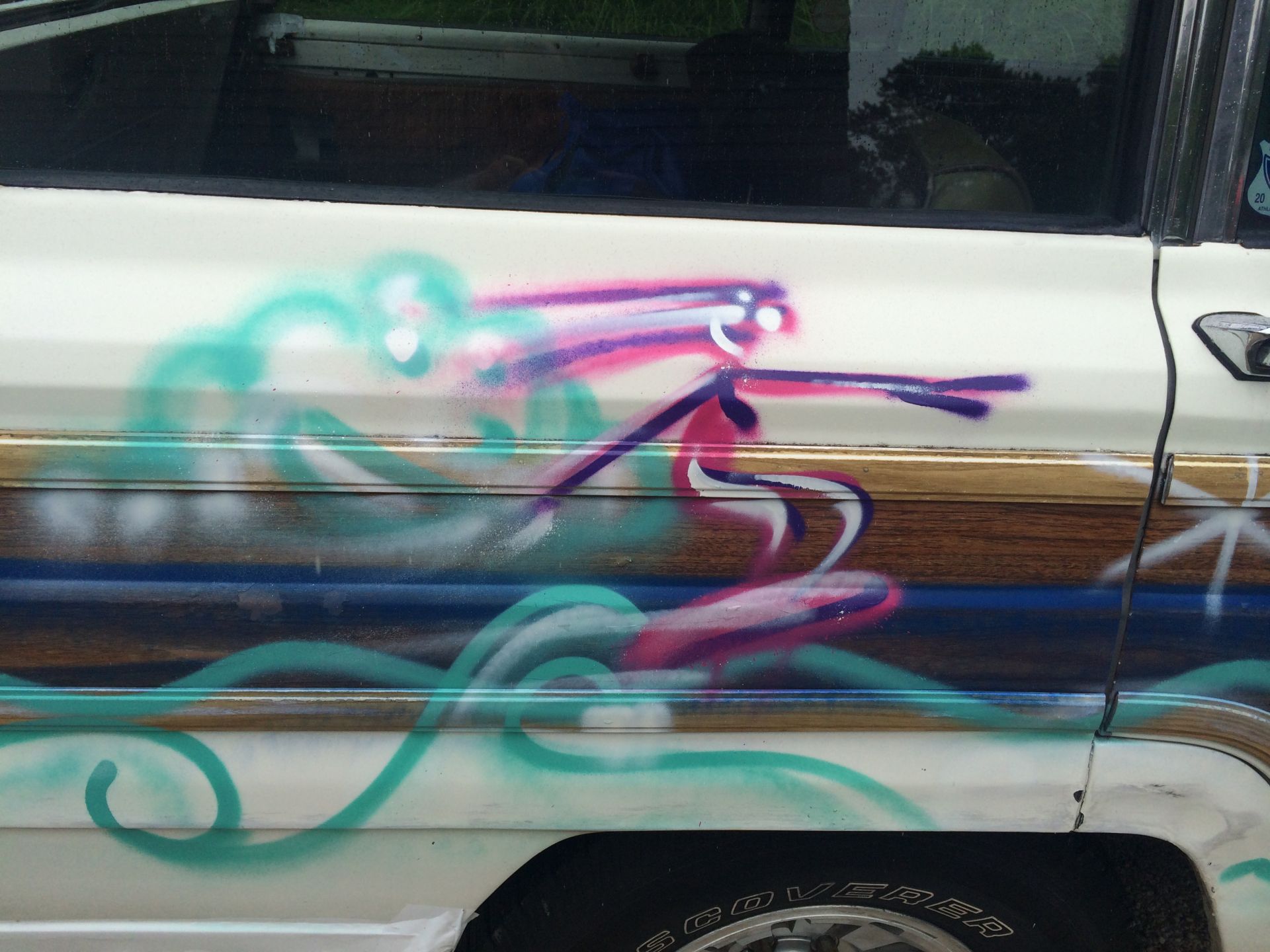 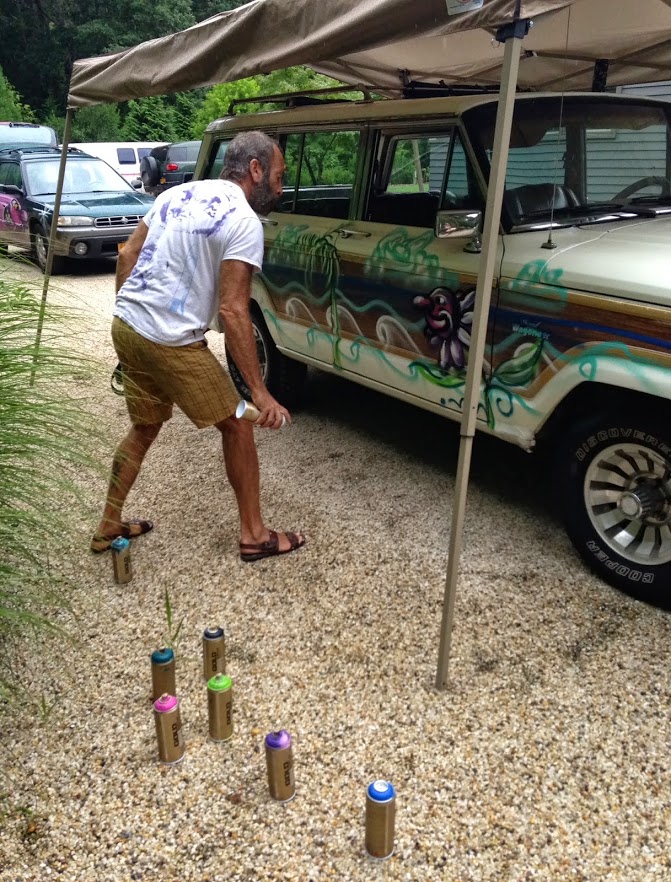 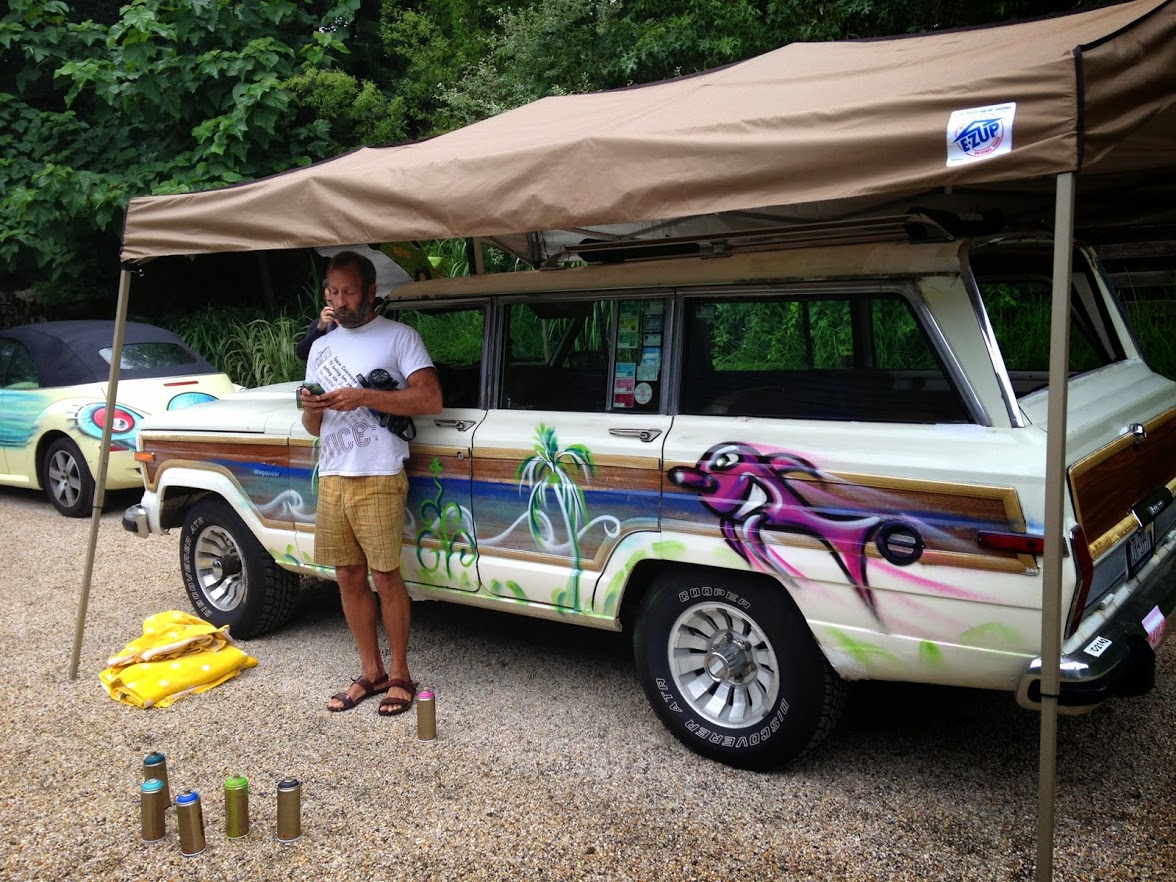 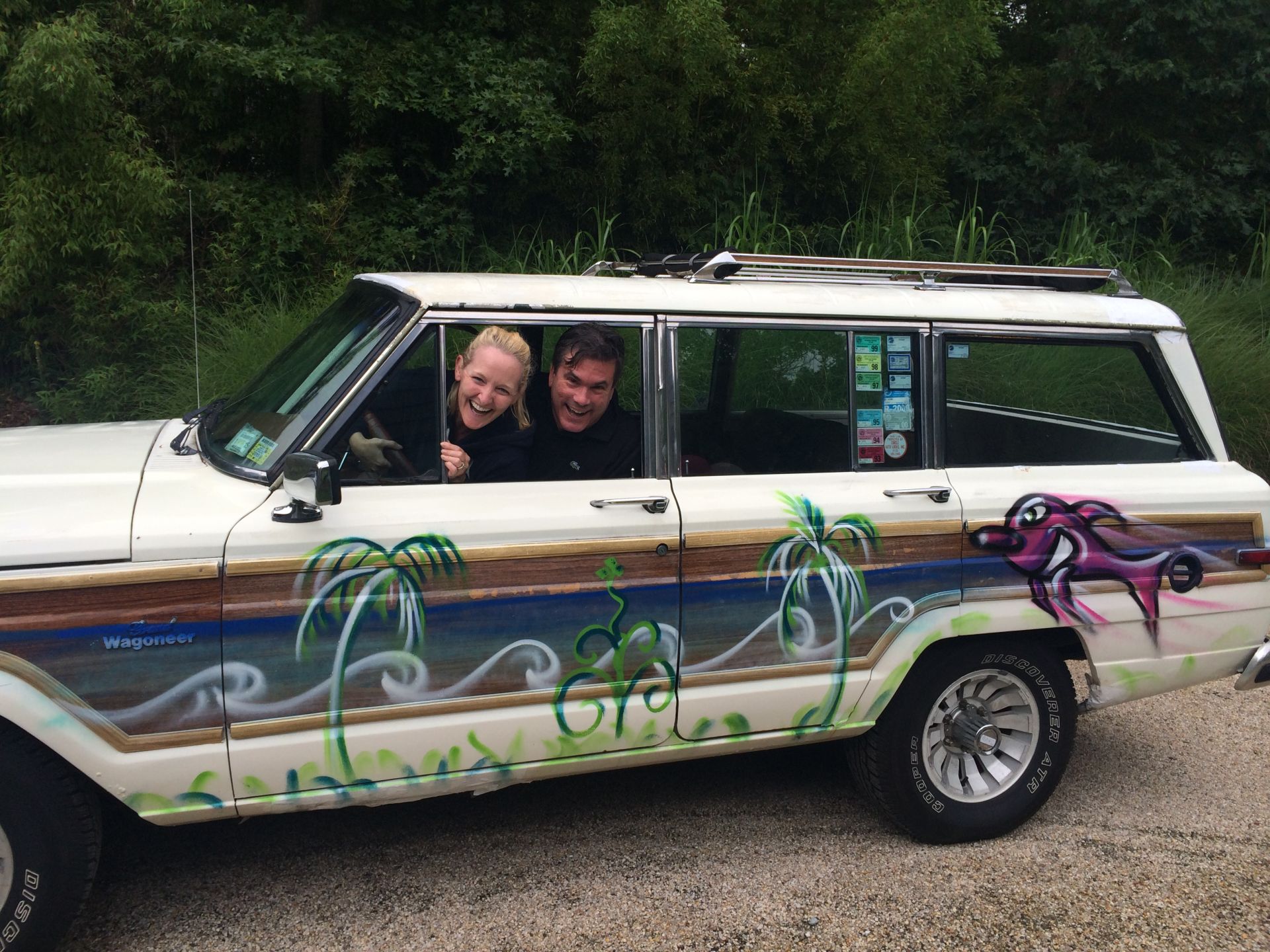 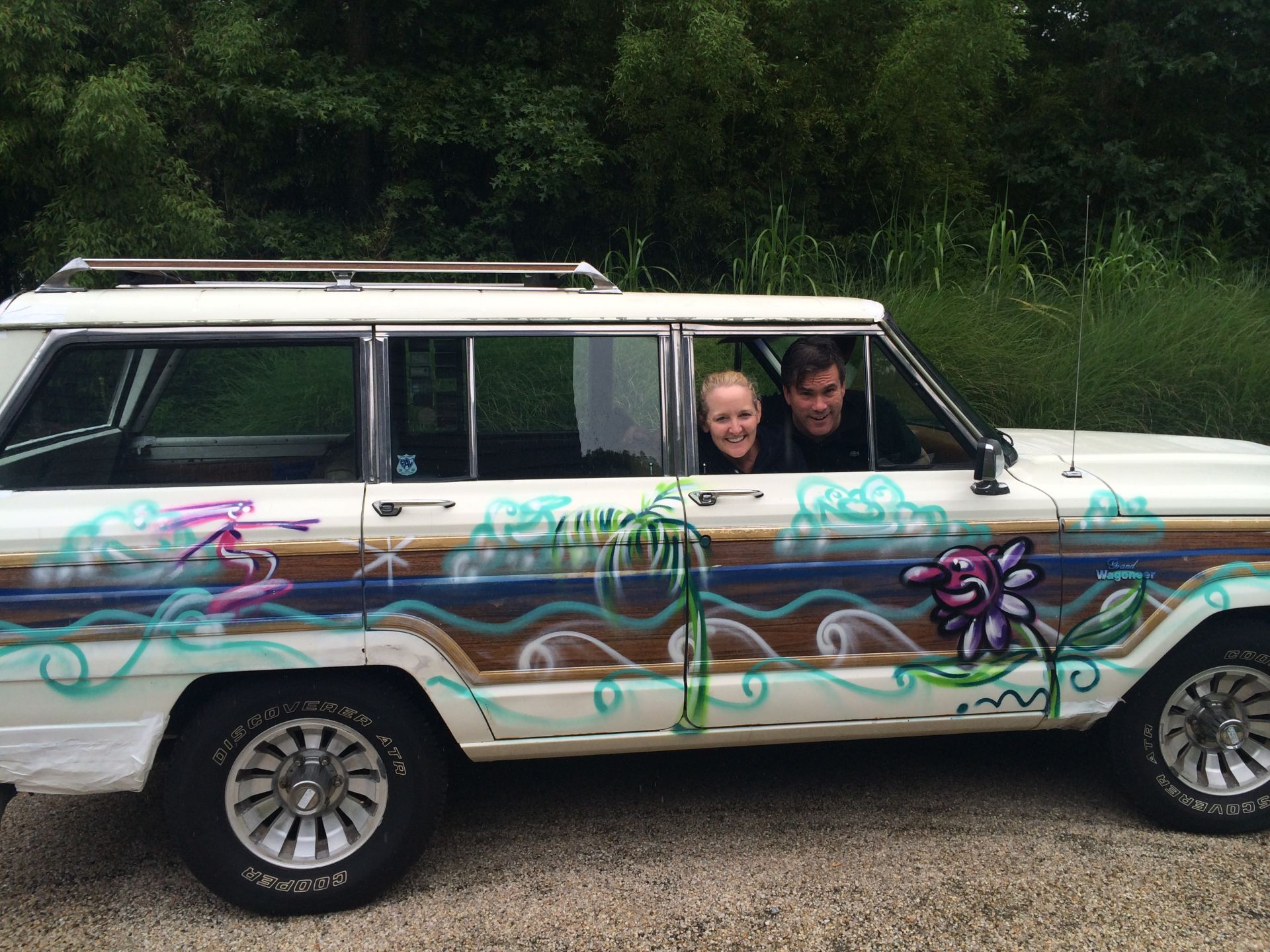 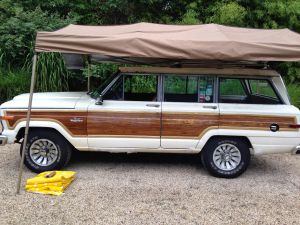 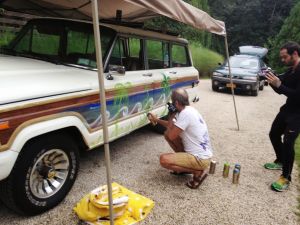 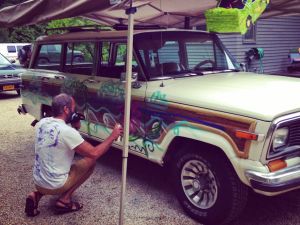 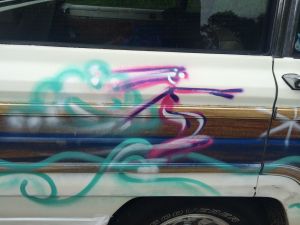 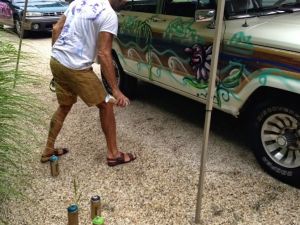 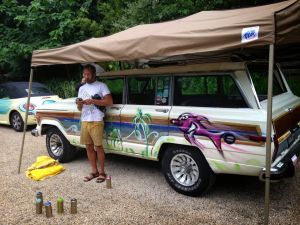 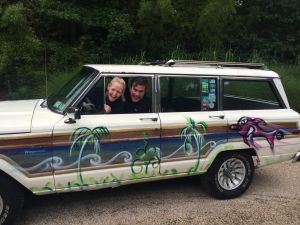 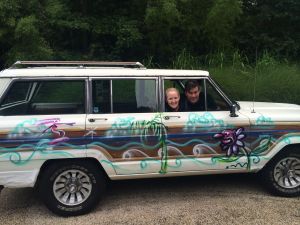 Some years back, friends arrived for lunch at my listing shack in East Hampton in the ultimate preppie beach car, a creamy 1984 Jeep Grand Wagoneer with faux-wood paneling, the interior carpet, a wonderfully offensive orange shag.

Yes, a Wagoneer, the preferred vehicle for Tommy Hilfiger ads and the The Official Preppie Handbook, where it was cited first among prepmobiles.

I quietly mentioned that if my friends ever wanted to sell, said car happened to be this writer’s automotive wet dream, even with rust on the truck’s quarter panels that matched the shag. Going to Yale in the early ’80s had left me unable to resist any form of Madras, Murray’s Nantucket red, and apparently, this Wauwinet-ready beach buggy crying out for duct tape.

By the time this young family was sensibly upgrading to a safer Jeep, the padded ceiling inside their jalopy resembled a Jackson Pollack painted with mold. The rust was metastasizing. The engine guzzled oil. They offered it to me for $500. I wrote a check without hesitation. I started out almost cheerfully covering the rust chewing at the quarter-panels with budget-friendly, white contact paper.

My love for this Lilly-Pulitzeresque rust bucket has run deep. Equally deep is my nostalgia for the ‘80s art world, where I cut my teeth as an in-over-my-head art editor and first bonded with artist Kenny Scharf on – yep – the Concorde. When an opportunity came along to combine my passions this summer, the stage was set.

That winter, I drove it upstate to have the rust on the driver side fixed for, ouch, $3,000. The following summer, side two. I had it cleaned, recleaned, and detailed, and the rugs shampooed and reshampooed; to my complete surprise, the interior actually regained its gleam.. The next winter, I replaced the roof upholstery, fixed the rusted-out floorboards, and had the front seats repaired—yet again for a punishing $3,000. I’m a writer, not a banker.

Sadly, during summer three, on the way to Sag Harbor, the engine began billowing smoke, and sparks blew out of the exhaust. I quietly paused at the local fire station just in case.

In much the way that people spend wantonly on aging pets, I replaced the powerful engine (same as a Hummer) for $5,000. After years of repairs—just replaced the starter and radiator–I was into this gas-guzzling, headrest-less beast for $20,000.

But what our vintage Wagoneer lacked in economy, it more than made up in cool factor especially in Montauk. My wife and I fielded numerous offers to buy it. Valet after valet offered the life-affirming “Dude, cool car!” Again and again we overheard people saying, That’s the car we should have. Roaring through the farmlands in Bridgehampton and Watermill, I felt like the sad, last minute addition to the guest list at some tony estate in a P.G. Wodehouse novel, hurrying to attend in style.

Flashback to when I first began working at Interview magazine in 1984, I found a cassette tape in my desk of an interview with between Keith Haring and Kenny Scharf. I listened to it between fielding calls from the likes of Jean-Michel Basquiat, calling in for Andy Warhol from a throbbing nightclub in Germany. Haring and Mr. Scharf were beyond close; they came of age together at art school, tagging subways, and later showing at the Tony Schafrazi gallery. They were a rising movement: graffiti gone salon.

When I was promoted to underqualified art editor (I had worked as an assistant to a curator at MoMA for two weeks), I flew alongside Mr. Scharf to an Absolut Vodka art exhibition in Stockholm. Yup, perks were that sweet in the late ‘80s.

So when a publicist recently mentioned that Kyle DeWoody, the art curator at the Surf Lodge in Montauk hosted a Kenny Scharf “Karbombz!” event that Sunday, it piqued my interest. I had fallen big-time for Mr. Scharf’s cartoon-like sensibilities—fluid space monsters, Jetson-like vehicles, and space vistas.

Mr. Scharf has been painting on cars in this manner since the ‘80s, and the ongoing series is slated to be a documentary, possibly directed by his daughter Malia, and a book. He lines up the autos of regular folks and paints fierce space creatures on the side gratis.

The mix was dangerous, obviously. On the one hand, how many people have an original work of art by a vaunted artist on their cars? On the other, the ultimate prepmobile could go terminal hipster with the addition of a toothy inter-planetary rodent. The high WASP wannabe conundrum made me feel feverish.

I canvassed friends. Photographer Paige Powell, who gave Basquiat his first show, insisted “Yes!” Others noted it was sacrilege to mess with such a classic—especially, heaven forbid, the precious paneling. Imagining some palm trees on the hood, I was shocked when my wife—who was reading the Warhol Diaries when we met (I’m in them on the 4th to last page, phew), gave me a free ride about Kenny tagging the car.  “Whatever you decide.” We’re married 19 years and it made me love her that much more.

That Sunday, we awoke to a light drizzle. My hands trembled as I raced to a carwash to attempt to erase minute blemishes of bird excrement while second- and third- and fourth-guessing the imminent makeover.

At our host Ms. DeWoody’s residence in East Hampton, I parked the Jeep under her Kmart special popup tent to keep the surface dry. I then swam laps in her pool to focus.

Mr. Scharf pulled in an hour later with 50 generic cans of spray paint crowding his trunk. A gorgeous, toothy, serpentine monster swirled up the side of his car. Yikes!

My wife, Fiona, and I gave each other the eye. My breathing felt shallow.

Mr. Scharf consulted us about color. Knowing I was on thin ice, as if this were a consultation with a froufrou decorator—though his sinewy form is more Iggy Pop than Jeffrey Bilhuber–I revealed a print out from my pocket of a beachy painting of his that j’adore. It was a futuristic, otherworldly jungle by the sea and space-age palm trees that he had painted.

“We were thinking of something like this on the hood,” I said.

“But no one would see it,” he shot back. In a moment, he was holding a protective face mask in place and laying down blue across the faux wood panels that everyone had begged us not to touch.

“Maybe a dolphin,” he suggested.

“Surfboard?” I offered, still shell-shocked when he asked I wanted on the other side.

Kenny took that thought farther and then some. He invented preternatural waves with eyes and a ghostly purple surfer. We had talked flowers at one point and he expertly filled one in with swirls of a poppy purple.

A quick burst, and eyes appeared. The Grand Wagoneer suddenly no longer appeared vintage. It was a fresh object altogether. It was the prefect Montauk-mobile—more groovy than preppie. Seeing the finished product was cathartic. We were almost weak with gratitude mixed with fear and elation.

Waves on the driver side recalled the rolling surf of Ditch planes. The palm trees weren’t hokey Hawaiian tourist fair, they were Scharf’s space-aged palms shaded with an edgy brilliant lime. The Dolphin was a large, palatable nod to Scharf’s angry space creatures. It was smiling, but looked as if it might bite the legs off of a space creature.

The surfer, on the other side, was created with a quick few lines, but offered an eerie edge. The large flower at the other end of the surf scene appeared blissful and yet possibly carnivorous.

In short, Mr. Scharf had added art to our hapless prep-mobile. We had delivered him a classic and he had given us a one of a kind.

Then he took a photo of us squeezing our heads out of the driver side window together; natch, in the rain, the back seat window on that side was stuck.

On the careful ride home, Fi and I, who could never otherwise afford to commission a major artist where euphoric, until we got home to greet our 13-year-old son screaming, “Oh, my God? What have you done to our car?”

The next weekend, I took the newly re-imagined Scharfmobile on my party rounds around the East End. At Guild Hall for the opening of the Robert Motherwell exhibit, a stately art collector beamed, “Nice car!”

During the tented gala dinner for the show, I was seated with the director of the museum and her husband, a podiatrist. “Was that you with the sort of Palm Beach beach-buggy?” he asked.

At the Bridgehampton Polo challenge, with art collector Peter Brant charging down the field in the distance, the young valets congregated around it, leaning on the unpainted back while I caught the match.

Only Chuck Schumer, whom I ran into at a Mill Pond cocktail party hosted by Julianne Moore for Children’s Health Fund, responded with stone-faced silence.

But a week later, turning onto North Main Street in East Hampton, a young, art savvy youth, possibly a Surf Lodge enthusiast, hailed me with his fist out straight as my car passed. “Scharf!” the car full of his clean-cut buddies hollered out in unison.

Emotion welled up as if I’d finally been tapped to join a frat.