You’ve probably seen the ads. Maybe you’ve even “highly anticipated” this new show, coming as it does with the promise of a highbrow premise and a star director. But from its very first scene, The Knick makes it clear that it still really wants to prepare you for what is to come. As a teaser, but also as a warning, more forceful than that “Viewer Discretion Advised” disclaimer that everyone ignores. Right off the bat, it says, there are a few things you should know.

First off, this is a story about a Great Man who does Bad Things. You know, just in case you haven’t seen a hit premium cable show in the last decade. Otherwise, you probably already knew that. We open in Chinatown, in what is definitely a brothel and almost certainly also an opium den, followed by a scene in which our protagonist—Doctor Jonathan Thackery, played by a deeply furrowed Clive Owen—takes the long way to work so he can shoot up (with cocaine, we soon learn) between his toes in the taxi.

So right away we’ve got hookers and drug use, and as this a medical show set in the year 1900 in New York City, we now know that this man is basically going to be Dr. House with worse instruments and nicer outfits. And ether.

Speaking of worse instruments, we now move into the operating theater of the Knickerbocker Hospital, where we get our second, and more significant, piece of information about what is to come: This is going to be a show that is Not for the Squeamish. No, really. Because if the random bloody violence of so many of our cable shows is a bit gory for your taste, wait until you see the deliberate, slow, agonizing bloody violence that was involved in cutting open living people’s bodies, back in the years before modern, efficient surgical techniques.

That is, of course, the central theme of The Knick: we are at the very birth of surgery, witnessing where our much-less-gross, much-more-successful modern surgical procedures came from, developing in fits and starts, through trial and error—mostly bloody, grotesque, horrifying error.

And so, fittingly for this troubled birth, the first surgery we see is a caesarean section on a woman with severe pregnancy complications. It is the twelfth attempt by the Knick’s head surgeon, Doctor Doctor Doctor Aldous Leekie Doctor J.M. Christiansen, at such a procedure. And after a lot of bloody fumbling—made so, so much bloodier by the fact that the hospital does not yet have electricity, and so all the sucking away of excess fluids is done by means of a hand-crank—they lose both mother and child. Sending Dr. Christiansen into a tailspin, and into his office with a small pistol, and us into the main engine of the plot.

To wit: Erstwhile deputy head surgeon Dr. Thackery must now step into his late mentor’s role as chief, but instead of his pick to be deputy, Dr. Everett Gallinger (Eric Johnson), he is forced by the wealthy Robertson family, who are singlehandedly propping up the financially foundering Knick and funding its ongoing electrification, to hire African-American surgeon Dr. Algernon Edwards (André Holland). Which brings us thing #2 that is Not for the Squeamish about The Knick: abundant and in-your-face racism, and not just on the part of characters we are supposed to hate, but also voiced by people we are apparently supposed to care about.

So alongside the staggeringly unlikable head of the hospital Howard Barrow’s explicit racial hatred, we get Dr. Thackery’s not much more disguised hope that the extraordinarily talented Dr. Edwards will just shrivel up and die, ideally somewhere far away from the hospital. The fact that he cloaks his racism in the language of practicality—most patients will not want to be treated by a black man, so hiring him will essentially put more lives at risk—only seems to make it more offensive. Ditto Dr. Gallinger’s attempt to make it all seem like professional jealousy at the job he was passed over for, and even the over-friendly and awkward overtures of the youngest surgeon, Doctor Bertram “Bertie” Chickering (Michael Angarano).

(Aside: I was tempted to name the beard sported by Dr. Chickering the third thing in The Knick that is Not for the Squeamish, if only for the gag, but it is just too ludicrous. IMDB claims that Angarano is 26, which must be true, I suppose. And maybe the facial hair is his own. But he looks for all the world like a 14-year-old playing Abraham Lincoln in a middle school play.)

The actual thing #3 that is Not for the Squeamish is the consequences of Dr. Thackery’s rampant cocaine use, specifically the fact that he has been shooting up for so long that he no longer has usable veins in his arms and must inject the drug between his toes. He tries to kick the habit after the demise of Dr. Christiansen—who, we learn in a flashback, introduced our antihero to substance abuse in the first place—and throws himself headfirst into a crippling and helpless withdrawal.

When he does not show up for work and is urgently needed to help a patient suffering from septicemia, the hospital sends winsome West Virginian nurse Lucy Elkins (Eve Hewson, and yes, that is Bono’s daughter, Dublin-born but nailing the Southern accent) to find him. In her ornate white nurse’s uniform (though thankfully without the turkey-leg paper frill thing they make the nurses wear on their heads), she climbs into Thackery’s window, and finds him in his bed, broken and sweating. Unable to find a vein in his toes, she injects cocaine, at his request, directly into a blood vessel in his penis. We are spared the sight of this particular procedure.

But not of the one that follows, the resecting of a bowel, which Dr. Thackery performs with such skill and ingenuity—he basically invents the idea of spinal anesthesia on the spot, using, you guessed it, cocaine!—that it inspires Dr. Edwards, who had pretty much made up his mind to leave where he was not wanted, to stay. Much to the consternation of pretty much everyone else involved. Except the delighted Robertsons, who thus will continue to fund the Knick and its electrification. In the episode’s final, wordless scene, they complete the installation, bringing the light of the twentieth century to bear on the darkness of the nineteenth, with the click of a switch.

Honorable Mention, also Not for the Squeamish: the bodies of dead animals. Seemingly everywhere, often in the immediate foreground of director Stephen Soderbergh’s always gorgeous and intricately framed shots. I don’t know if this is foreshadowing for some terrible epidemic yet to come, or if it was simply a fact of life in New York in the year 1900, but it is awfully noticeable, and awfully unsettling. 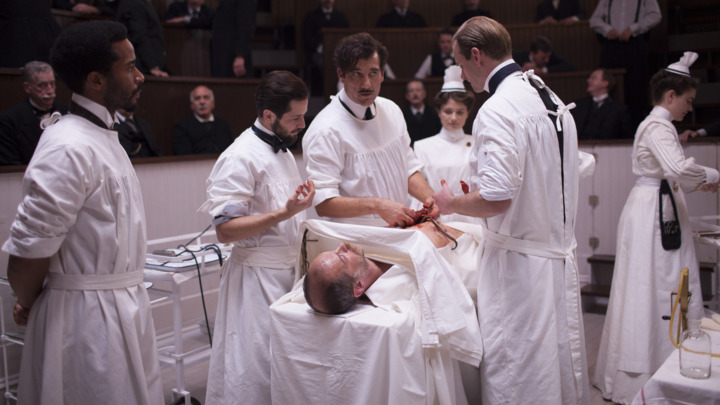