Thackery and the oranges. (Cinemax)

If all you knew about The Knick was its ad campaign, you could be forgiven for thinking this was a show about the early years of modern medicine. But at least so far, the bulk of The Knick’s actual plot has not focused on the birth of surgery, or the practical difficulties of running a private hospital, but on the persistence of racism in New York in 1900. It seems primarily at this point to be a show about the struggle of one gifted African-American surgeon to overcome overt and blistering bigotry at his forcibly integrated hospital. (Cinemax clearly should have hired me to copywrite. Tagline: The Knick — come for the horrifyingly botched surgery, but stay for the unspeakably racist doctors!)

We open on a shot of said doctor, Algernon Edwards, waking up next to a gigantic cockroach. Ugh, how drunk was I last night? But no, this is just the daily vermin he must live with. Because, despite his honors and titles, he’s still a black man, forced, unlike his downtown-townhouse-living colleagues, to reside in a boardinghouse in Midtown (which back then was known as the Tenderloin and was the roughest part of Manhattan), where he has to wait in a line every morning to use the only bathroom.

Behind him in that line, Dr. Edwards encounters a belligerent fellow-boarder who wants to know where he got his fancy leather shoes. Why, from a shop in Paris, of course. Which is all his interlocutor needs to fly into a full “you think you’re better than me?” rage, sending Edwards fleeing into the john. Because it’s not enough that everyone at work hates him for being black—the people where he lives have to hate him for not being black enough.

At the hospital, they’ve stuck him in a basement storage room that they’ve (barely) converted into an office. Despite his expertise, he’s never allowed to do surgery, and only rarely allowed to treat patients at all. We see him giving a little girl stitches for a gash in her arm while her mother looks on, palpably disgusted at the fact that this black man has to touch her child at all. With every stitch, she seems to be physically holding herself back from smacking the doctor’s hands away and taking her bleeding child home still bleeding.

The stick-on beard of high-schooler Dr. Chickering is also doing nobody any favors, poking itself chipperly and obliviously in to comment on how nice Dr. Edwards’ stitches are, and then announcing its intention to go hit up the brothels in the Tenderloin one of these days. Quoth Dr. Edwards: Cool story bro, and good luck with the syphilis. Now leave me alone, can’t you see I’m busy getting eye-murdered by a woman for the crime of providing her daughter urgent medical care?

He finishes the stitches just in time to see a black woman with a hugely swollen arm get turned away from the hospital’s front desk by a nurse who studiously avoids his gaze. So he goes and prepares a space adjacent to his office as a treatment room, pasting up newspaper over the window—you know, just in case anyone sees and gets upset about him treating sick people in a hospital—where he cures her. So now Doctor Edwards is running a medical clinic out of the basement of the Knick.

For those of you following along at home, that’s like eight different instances of crazy-ass racism, and we haven’t really even gotten to the main plot of the episode yet.

Which involves these two patients, both about to die of aortic aneurysms. Dr. Thackery’s normal procedure involves surgically removing the aneurysm and sewing the aorta back together, which mostly just kills patients. Of course, when he was living in France, Dr. Edwards learned about a “galvanic” technique that was much more successful. Galvanic, of course, comes from the Latin “galvanum,” meaning, roughly, “who gives a shit how well it works because you’re black. Also, France? Ew.”

So they basically give Edwards an even more withering version of the “you think you’re better than me?” look and go perform their useless procedure on one of the patients, which only succeeds in exploding blood all over their faces and making snobbish Dr. Gallinger whine like a little baby.

Dr. Thackery is now finally able to admit that maybe the surgery isn’t the best solution, and they should try the French procedure. A procedure that Dr. Edwards has performed before, that he knows how to do, and that he told them about in the first place. So instead of even considering consulting him, they come up with a brilliant plan: break into the office of an uptown doctor who gets the European medical journals and find what they think might be a paper describing the procedure in one of them, despite the fact that none of them reads French. Yeah, much easier, you racist pricks.

Speaking of pricks—Dr. Thackery also has to deal with the fact that Nurse Elkins saw his a few days ago when she injected cocaine directly into it, and she now seems to be avoiding him. But, from the look on her face while he lectures her about how they should keep their private and public lives separate, I’d say her she’s been ducking him less because of the compromising position she found him in and more because she’s got a full-blown crush on her boss.

And that’s the least of Dr. Thackery’s problems this week, because in addition to trying fruitlessly to stitch up hearts while dodging the advice of the one person who can help him, he’s also trying to weather the botched installation of the hospital’s electrical grid. Remember the Robertson-sponsored electrification, which was the whole reason that he was forced to hire Dr. Edwards in the first place? Well, it doesn’t really work very well. There’s a short out while they are cauterizing a wound, and the surgeons end up setting a patient on fire, briefly, and electrocuting a nurse, fatally.

It turns out that the manager of the hospital, Herman Barrow (speaking of pricks), took a gigantic kickback to grant the electrification contract to an Irish electrician/mobster, who of course didn’t do a particularly good job, and is now trying to squeeze a ton more money out of Barrow to fix it. Which is a real problem for Barrow, since he is already in debt to some other, scarier Irish mob for $9,000. Which in 1900, by my calculations, would have been approximately all the money in the entire world.

Barrow tries to negotiate a loan extension with the remarkably stereotypical mob boss Bunky Collier, who reacts with the third example of “you think you’re better than me?” in this episode. And then, to prove that he’s not, he yanks out one of Barrow’s teeth with a pair of pliers.

Oh, also there’s a nun who performs abortions. She and Dr. Edwards should really get together: no sense in having two separate secret clinics in the same hospital.

That night, Edwards gets back to his hotel to find his friend from the bathroom line lying in wait, ready to beat him up for being so fancy, and take his shiny shoes while he’s at it. But the good doctor gets the better of him and knocks him out cold. Then he comes back and leaves two bottles of medicine next to his attacker’s unconscious body, for when he wakes up. Because yes, in fact, he’s better than you. 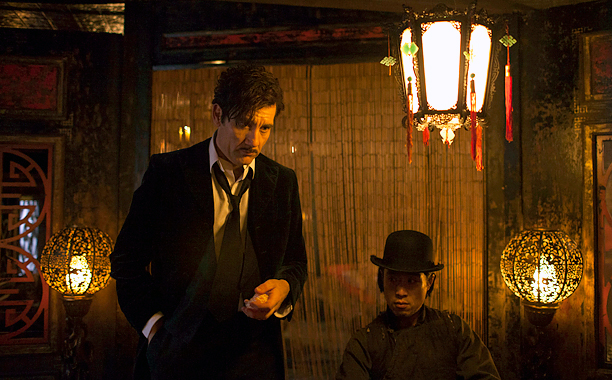