The Knickerbocker Hospital, it turns out, is full of secrets. By day, its huge windows bursting with light that reflects off starched white nurse’s uniforms, it looks open and bright. But after night falls, lit only by those weak Edison bulbs, it becomes a mass of shadows and gloom, where people skulk around, shrouding their illicit and shameful dealings from the world.

But you can’t hide forever. Case in point: Doctor Thackery’s ex-girlfriend Abby, who shows up at the hospital with a raging case of got-your-nose. It seems her husband has been sleeping with a girl in his office who was secretly syphilitic, and now-infected Abby has gone all Voldemort.

“It must be awful to wear your shame on your face for people to see,” comments a nurse later, inviting Thackery’s ire. But there’s a reason “plain as the nose on your face” is an expression. Noseless Abby will never be able to live a normal life again; her disgrace will always be on display. Out of pity and regard for their past relationship, the good (bad) doctor agrees to take the case.

The surgery is the sort of terribly weird and torturous thing that I would have assumed was invented by the diabolical writers of the show, had I not Googled it and found out that it was once a real thing. They tie her forearm to the top of her head and then graft a piece of forearm skin over her nose-hole, but leave it attached to the arm to maintain blood flow. And then they leave her that way, arm tied to head, for “several weeks.”

When it is done, Doctor Thackery bemoans to an (increasingly flirtatious) Nurse Elkins that even if the surgery is a success, Abby will still look grotesque. She replies that giving someone a small amount of hope and dignity is better than doing nothing at all.

This inspires Thackery to try to save a little girl who is dying of typhoid fever, a case he previously thought hopeless. The surgery is a success, much to the joy of family friend Cornelia Robertson, who is now hot on the trail of a typhoid epidemic among Manhattan’s rich elites—a strange outbreak of a disease that usually strikes in poor, unsanitary neighborhoods. But, as Speight the health inspector comments, germs can lurk in rich circles as well, popping back up unexpectedly in new victims.

Likewise lurking is Barrow, who manages to pay back his huge debt to the mob (but not to get his forcibly extracted tooth back) by illicitly stealing bodies from the hospital morgue, hiding their personal information, and then selling them to other hospitals as cadavers. We also meet his social-climbing wife, clearly the source of many of his financial woes. She is concerned that a pair of her pearl earrings has gone missing. We are led to assume that Barrow has stolen them to help pay his debt, but in fact he gives them to his child-prostitute girlfriend.

With no cadavers to practice on, Doctor Perfect Hair and Doctor Bearded Infant are forced to use pigs as they try to recreate Doctor Edwards’ “galvanic” procedure from a medical-journal paper poorly translated by Gallinger’s wife. They’re getting nowhere, and Bertie chipperly suggests that they might as well consult Edwards, considering that he is a co-author of the paper. Gallinger: “Bertie, you know those people are fond of exaggerating their accomplishments,” winning every medal in the racism Olympics. I seriously want to strangle this man.

But Thackery, ever practical (though still crazily bigoted, of course), says that if Edwards is a co-author of the paper, they obviously have to consult him. But he won’t be able to touch the patient—he’ll just talk Gallinger through the procedure.

Edwards is none too happy about this, but he’s got too much on his plate right now to deal with it. He has been skulking in the shadows, putting together his basement clinic for black people, which the hospital would surely shut down if it were discovered. So the patients knock on the back door to the kitchen and shout, “I’ve come about the washing job.” They are shown in by two boiler-stokers who Edwards has recruited as orderlies, and operated on with the help of two laundress-nurses. All of them, of course, at the risk of losing their jobs.

One of the secret patients is a man with a hernia. But after performing surgery on him, Edwards is unable to keep him in the hospital, for fear of being found out. So the doctor can’t stop him from going back to work, and so he rips his stitches and ends up dying back on Edwards’ operating table. The episode closes with Edwards drunkenly taking out this very bad day at work on some idiot at a bar, knocking him out in the street in a pointless fistfight.

Speaking of pointless, our final lurker of the episode is Cleary the ambulance driver, who is just hanging around Sister Harriet to let her know that he knows that she’s an abortionist. And for some odd reason we get four separate, repetitive scenes of Cleary dropping obvious hints to the nun about unborn babies. Wouldn’t just one have sufficed? (And while we’re on the subject of lazy writing, The Knick has really got to be more careful of its anachronistic speech. Nobody in 1900 was exclaiming “for fuck’s sake!” as Barrow does when he learns he’s been outbid on a cadaver.)

Next week: We finally get the galvanic procedure we have been building up to for three episodes. Will Edwards tell them how to do it? Will Gallinger follow his instructions? Will Bertie’s beard finally slip off and reveal that he’s only 11 years old? 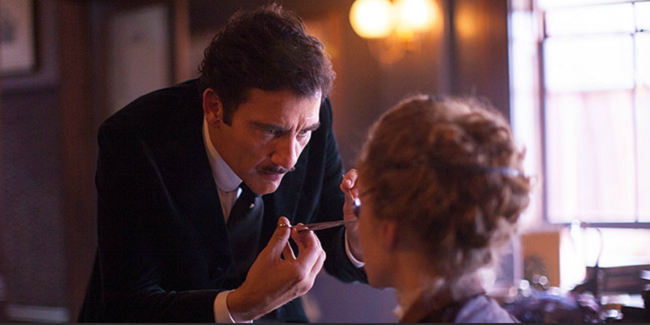