Question 121: Do you believe this show is in a better place? (HBO)

Look, I know we like to joke around here that The Leftovers is one giant metaphor for the baffling, unnecessarily painful experience of watching The Leftovers. And at times, sure, I may have been flippant about the show’s fixation on Grief-with-a-capital-G, because who wants to fixate on Grief? Like, not even Death, which at least Six Feet Under proved could be as much as a celebration of life as it was a morbid look at mortality, but Grief. Grief is something different. Grief is intense in a way that’s very uncomfortable, sure, but is also very, very boring. As we were reminded in this week’s surprisingly amazing and heartfelt episode of The Leftovers (#NoSarcasm, read on!), to grieve is to give up hope. It’s a zombification of the soul, whereby your body is just this blasphemous vessel, a betrayal of cell regeneration that should have long ago been put out of its misery. To despair is to ignobly continue existing, if only because you are too scared to pull the trigger.

Yet ironically grief is a sustaining life force: it focuses you the way chopping off a finger focuses you, the pain so all-encompassing that you’re propelled from moment to moment, a constant agonizing reminder of your own existence. Pain is proof that you are alive. And it’s a way to keep others alive. We want to hold on to our grief, because it makes us martyrs. If we keep holding onto our pain very, very tightly, we believe we are righteous. If we suffer, then we are validated and vindicated. We are Christ on the cross. We are elevated to a pure existence that no one can question.

But as a character points out this week, the nobility of all that suffering is pointless. “Surely a live dog is better than a dead lion,” says Magic Hugger/Cult Leader Wayne, whose embrace can cure Departed-related suffering to those ready to let go of it.

Yeah, shit just got real on The Leftovers. Finally.

This is all to say that as I read my notes on this episode, I literally watched the arc of my own reaction, starting at my reflexive “I’ve been there, lady!” eye roll when Nora, the woman whose whole family disappeared during the maybe-Rapture, just stares at the empty tube of paper towels that she forgot to restock at the store. A major theme of this show, as you know, is that losing trivial shit is the total equivalent of 148 million people disappearing. But by the end, I had rewritten the same note to myself again– ” I’ve been there, lady”– in a totally different context. When Nora finally unburdens her grief onto Wayne, I wondered if maybe that Leftovers’ audience = Leftovers’ characters theory had more to it. I had been holding onto my grudge against the show, and what had that got me? Was I happier, hating the experience of watching it? Wouldn’t I be happier letting go of my pride and admitting that it didn’t need to be agonizing? So yes, a perfect equivalent: having two missing-presumed-dead children, and writing shit about Damon Lindelof on Twitter. Ask Wayne asked Nora, “Do you want to feel this way?”

My god, did you cry at the part when Nora asked if taking away her pain would make her forget her children? And Wayne, with his wet eyes and a beatific smile, opened his arms like salvation incarnate and shaking his head? Because I wailed like a fucking baby. I don’t know if it was just the unexpectedness of the show paying off in a meaningful way, but there were a couple moments last night where I wondered if I maybe wasn’t watching one of the best hours of television this year. Better than all that Carcosa bullshit, which had the pretense and style of something meaningful but was ultimately nonsense. At least The Leftovers delivered, and on a promise it didn’t even make, no less.

Of course, watching it again I realized that it probably wasn’t that great, but that’s the thing about being overwhelmed with emotion…it can get you thinking funny thoughts. At least we’re establishing a pattern here: much like in the Pastor Matt episode (who, coincidentally, is Nora’s brother, I think-ish?), the less that Sheriff Kevin “Crazy Bagels” Garvey has to do with a plot, the better it is. Maybe he’s just the Trojan Piper Kerman of The Leftovers, and the rest of the season will involve these other characters with their beautiful, sad, self-contained lives. Let’s not give our hopes up.

I’m not going to even try to get into this week’s plot in detail, because there are only so many hours on a Sunday night (at least until pay networks figure out how to bend the time/space continuum to air more episodes of True Blood), but I will say, you won’t be able to find a more dramatic rendition of conference attending on all of television. There was an entire subplot around the lack of laminated badges given out for a panel discussion. (“I’ve been there, lady!” — My notes.) At one point we are literally watching a guy give a slideshow presentation. And his only slide is a picture of Jesus. (At least it’s not INPUT: HDMI.) On a tangential note, I wish people would stop making stories that involve long-winded seminars as part of the narrative. *cough*LUCY*cough*. I blame TEDTALKS.

Nora is attending the conference as a spokesperson for the National Bereavement Endowment Fund, a government agency that has sent her to either a very urban Annapolis, MD or the part of Miami that looks like Times Square. She’s supposed to give a speech toeing the company line about being a survivor (I guess?), but instead meets a crazy-eyed Billy Magnussen, who, unfortunately for all of us, does not take his shirt off. (For that, you’ll have to buy tickets to see Laura Eason’s Sex with Strangers.) After cornering Nora in a party and then in an elevator, she goes and has an Ecstasy party in his hotel room, culminating with her frenching his corpse. But not his real corpse: this guy’s job is making all those Loved Ones mannequins of the Departed people, so their families can have a funeral with a body to bury. You know, for closure. His sleazy/guileless whining to Nora–begging her to tell him whether or not he’s soulless monster for charging $40k to sell plastic corpses to the grief stricken–is a moment of surreal vulnerability that it makes you angry. You mean this show could be amazing, but chose not to be for its first couple episodes?? What the hell?

We find out that Nora likes to hire hookers to shoot her in the vest while she wears a Kevlar vest, and that she once called a woman a “cold heartless bitch” for spreading Jenny McCarthy-y ideas about the correlation between breakfast cereal and incidents of pre-adolescence departure. At one point starts screaming at an author whose book on “What’s Next” felt as much as an infringement on her identity as the doppleganger who stole her badge in order to protest the NEF’s practices. Losing four family members in the faux-pocolypse isn’t enough to make this man credible, since he wasn’t Grieving right. There is a lot of talk about whether the phrase “ambivalent loss,” which may have been a more accurate name for this program than The Leftovers.

In the end, Nora finds Wayne, who gives her the Magic Hug, thus allowing her to continue living without the burden of constant, knife-twisting agony. She stops stalking her ex-husband’s girlfriend and listens to her voicemail and buys paper towels. She looks totally great, by the way–almost like a different actress entirely– which makes it all the more upsetting in the final moments of the episode when Sheriff Crazy Bagels appears at her door like a fucking stalker (on duty! After tracking down her address because her number is unlisted!) tells her he’s a fucking mess and that he wants to take her on a date. He also says he didn’t take it personally when she told him to fuck his daughter (oh, that happened at some point,) which maybe is the kind of thing you should take a little personally? I don’t know.

So yes, I did feel a little like Nora at the end of this beautiful episode, baptized of her cynicism and suffering and ready to delve back into the stupid, dark abyss of Garvey’s mind, full as it is with overused stag cliches, dead dogs, and pathological tediousness. Or wait, am I just describing The Leftovers? Guess I’ll stick around another week to see if there is a difference. 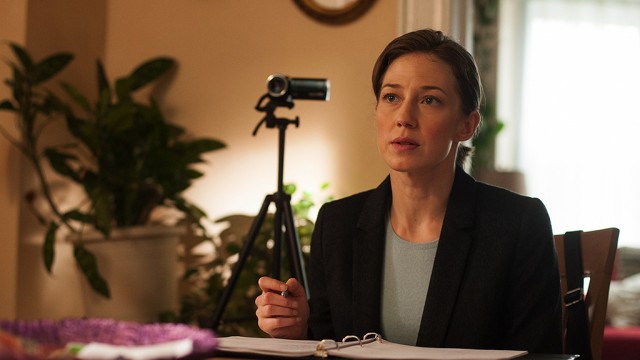