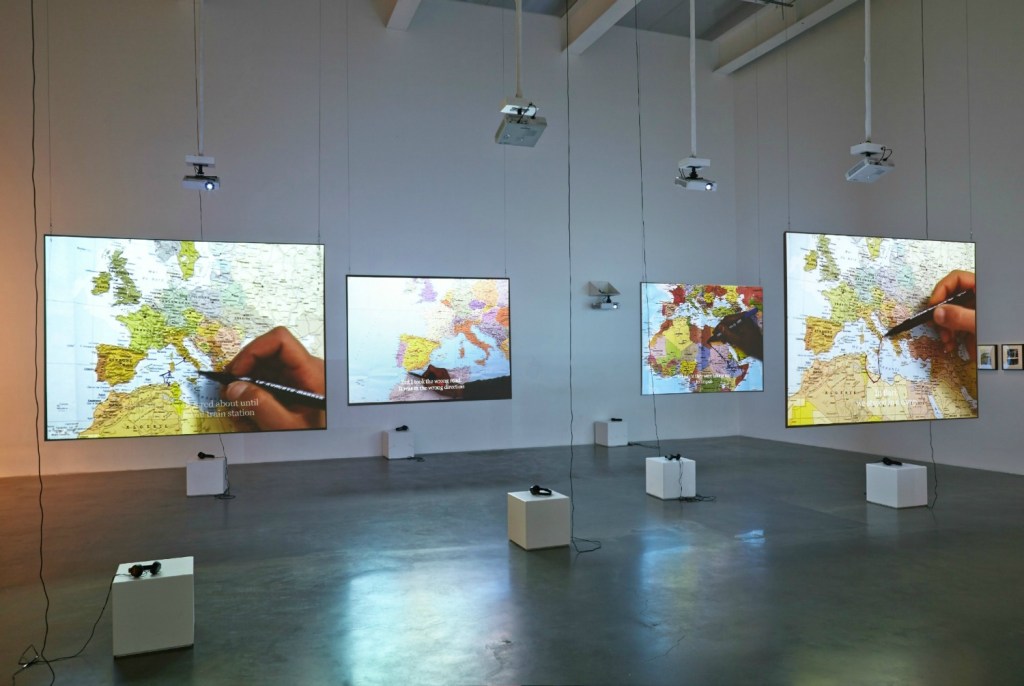 In the middle of a lofty gallery in the New Museum, four movie screens floated, suspended from the ceiling by wires. Projected onto one of them was a map of the Eastern Hemisphere. A hand clenching a black marker hovered, drawing a pattern of mysterious lines from Russia to Bangladesh to Africa. The hand pointed to Macedonia and, in a resigned drawl, a man began to speak in Italian. Subtitles flashed on the screen: “I was in prison there for 8 months and 20 days. Something like that.”

This man is one of eight illegal immigrants who talked about their turbulent escapes to Europe with the artist Bouchra Khalili for her video series “The Mapping Journey Project” (2008-2011). The eight videos are currently on view at “Here and Elsewhere,” a show featuring over 45 contemporary Arab artists that will fill all five exhibition floors of the New Museum until September 28.

The films all show a similar scene. Each one opens to an image of a map and soon a hand with a marker appears. You never see their faces – just a hand, with the occasional hint of a shirt or a shadow of lips moving. In just a few minutes, each person traced and narrated their roundabout journeys. Sometimes, lines were retraced while a person described being sent back home by border officers. At other times, the pen would rest on one spot for a while, making a thick pool of ink as a person described having to wait there for months for another boat to come. Some spoke in Italian, others in varieties of Arabic, and some in English. No matter the language, they all spoke in the same detached, matter-of-fact tone as they told horror stories of travel companions dying or moving through miles of desert on foot. Their trips took anywhere from a few months to five years.

Ms. Khalili, 39, was born in Casablanca and is one of the few artists in “Here and Elsewhere” to have shown in the United States before this exhibition. Though she also works with photography and prints, most of her pieces in the past few years have been videos—many of which experiment with different ways of narrating the journeys of illegal immigrants. In her 2008 video, Anya, for example, Ms. Khalili showed in real-time the boat trip that a young Iraqi woman took from Asia to Europe across the Bosphorus straight, while the girl’s voiceover recounted 12 years of living undocumented in Istanbul.

Ms. Khalili says she does not see these people as migrants, but as members of a political minority, whose journeys are acts of defiance. “Ultimately this is what ‘The Mapping Journey Project’ is about,” she said in an email. “How a human being is still able to resist though he/she is trapped in the nets of arbitrary power.”

To find subjects for “The Mapping Journey Project,” Ms. Khalili traveled to European cities known for being transitory points for migrants. She never went in search of someone from a specific country. Rather, she started the process by becoming immersed in her location. Then, like clockwork, the people she was looking for would emerge. “The encounter occurs from the moment I accept to get lost in a city,” she said. “It’s a mysterious process, even though it relies on a method.” 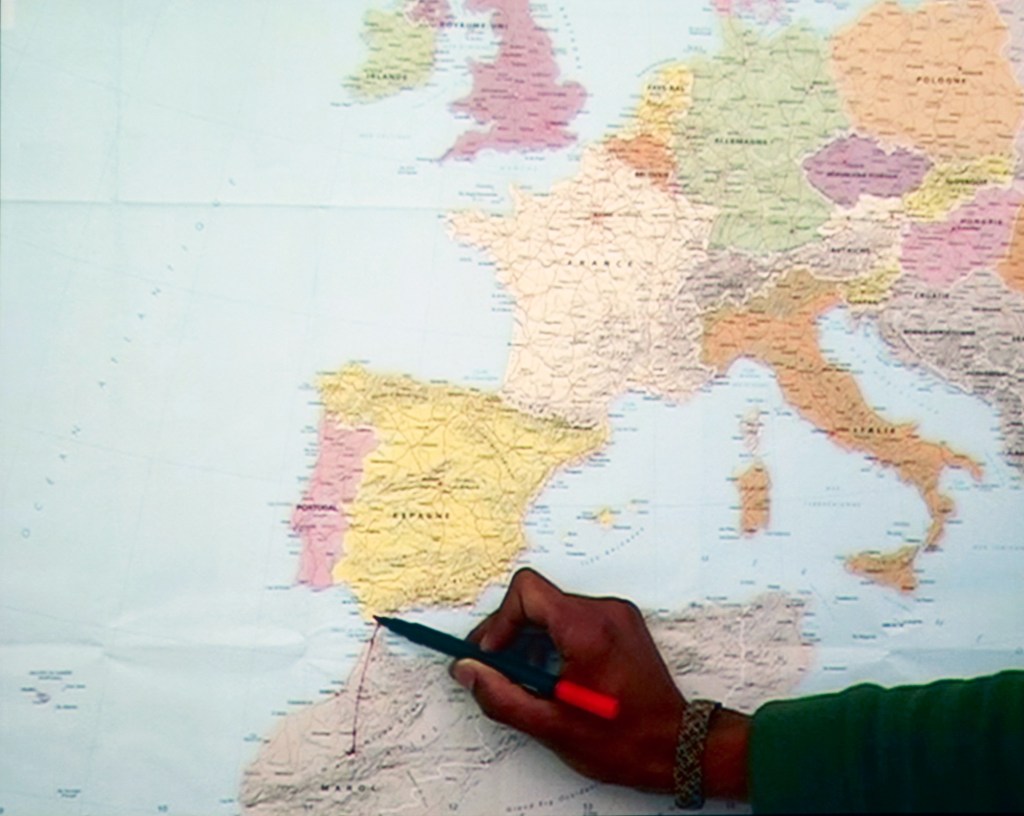 Ms. Khalili would then spend hours talking to the person off-camera—asking them questions about their travels and allowing them to flesh out their narrative. “Those conversations participate in a process of empowerment,” explained Ms. Khalili. “The narrators become the authors of their own narratives.” When they had developed their voice, she would give them the map and the marker and film their narrative in one shot. She’s quick to clarify that the videos are not interviews. She does not interrupt with questions and she does not edit after shooting the films.

Perhaps that is what makes her work so powerful. The narratives are not scripted. The camera does not have a filter. The work feels as raw and real as it is. Ms. Khalili deftly brings these stories out of her subjects, but ultimately the stories and voices do not belong to her. And so, she has respectfully and tastefully imposed as little of her voice on them as possible.

For some, the journey is not over. In one of the pieces, a woman traced her journey from Mogadishu, Somalia to Bari, Italy with a blue marker. Unlike most others, she made an arrow at each place she stopped. Her final arrow rested on Bari and pointed hopefully north. She explained that she wants to go to Norway or England. “Now I live and work here and I’ve learned Italian,” she said as she traced and retraced the dark blue arrow. “But staying here I don’t like.”