For years I have been defending Jimmy Carter against charges of anti-Semitism. Maybe I just didn’t want to believe that a President of the United States – the freest country in the world – could dislike Jews.

So I chalked up his animus toward Israel and his awful accusations of Israeli apartheid to a faulty moral compass. Even the other day on NewsMax TV my friend Steve Malzberg asked me point blank if Jimmy Carter is an anti-Semite and I said no, blaming his inane statements on Israel to his being what Vladimir Lenin described as ‘a useful idiot.’

Mr. Carter always sides with the weaker party in a conflict notwithstanding their immorality. Let us never forget that the Carter Administration tried to seat the exiled Khmer Rouge as the rightful government of Cambodia even though they slaughtered one out of three Cambodians in the 1975-78 genocide. For Mr. Carter, weakness was itself a sign of righteousness.

But Mr. Carter’s recent accusations of Israeli war crimes, his demand for a United Nations investigation into Israel’s actions in Gaza, and his call for Hamas – a genocidal terror organization – to be recognized as a legitimate political partner by Israel is making it near impossible not to ascribe to Carter some nasty feelings toward the Jewish state.

Mr. Carter’s pronouncements on the Middle East have become so toxic that had he not once been the American Commander-in-Chief they would be dismissed as the ravings of a man utterly out of touch with reality. But notwithstanding all the damage to his credibility, and notwithstanding his own grandson Jason, currently running to be Governor of Georgia, basically asking him to shut up, he remains obsessed with the Jews and Israel. While ISIS is trying to carry out the slaughter of Yazidis and Christians in Iraq, while Libya descends into a hellish morass of violence, and while hundreds of thousands die in Syria, Jimmy Carter remains fixated on the crimes of the Jewish state.

I grew up in the United States during the 1970’s when we danced to disco music, wore leisure suits, and watched the Brady Bunch. But as if that weren’t torture enough, we had Jimmy Carter as president. I can still recall how depressing it was to watch his taciturn face announcing one catastrophe after another, from the skyrocketing misery index, to the Soviet invasion of Afghanistan, to the capture of our hostages in Iran, to the tragically botched rescue attempt to free them. Fortune did not smile on Jimmy Carter and he was, poor thing, hapless at nearly everything he touched.

But Mr. Carter’s biggest failing was to be bereft of a moral compass. To be sure, his heart wished to do good. It’s just that his head was often confused as to what the good was. Throughout his career he invariably found himself defending tyrants and dictators at the expense of their oppressed peoples, not because he was insensitive but because he was confused.

Mr. Carter always subscribed to what my friend Michael Scroccaro calls ‘Underdogma,’ a knew-jerk reaction to champion the cause of the underdog however immoral the party. Poverty dictates virtue and weakness dictates righteousness. So, if the Israelis have jets and the Palestinians only rockets then that must necessarily mean that the Israelis are the aggressor.

Mr. Carter’s underdog obsession is what motivated him to legitimize Fidel Castro and take his side in a bio-weapons dispute with the United States and to praise North Korean dictator Kim Il Sung with the words: “I find him to be vigorous, intelligent,…and in charge of the decisions about this country.” This is the Korean dictator who, together with the tyrannical son who succeeded him, starved to death about 3 million of their own people. Carter added absurdly, “I don’t see that they [the North Koreans] are an outlaw nation.” He also hailed Marshal Joseph Tito as “a man who believes in human rights,” and said of murderous Romanian dictator Nicolae Ceaușescu, “Our goals are the same: to have a just system of economics and politics . . . We believe in enhancing human rights.” Carter told Haitian dictator Raul Cédras that he was “ashamed of what my country has done to your country,” which made most Americans ashamed of Jimmy Carter.

Mr. Carter is like a Timex watch. He takes a licking but keeps on ticking (though a Timex is, of course, much more accurate). No matter how wrong he is on the issues, no matter how many times his predictions about how organizations like Hamas will change, he just keeps coming back with more advice. This was the man whose record as Chief Magistrate has become a benchmark for presidential failure. Still, he refuses to get the message. He just won’t go away.

Fair enough. It’s a free country. And he has the right to be wrong.

But Carter’s nonstop criticism of Israel and his emergence – in the words of Alan Dershowitz – as a “cheerleader” for Hamas has confirmed in the minds of many that Carter has more than a bit of a problem with the Jewish state.

Mr. Carter said in 2006 that Israel’s policies in the West Bank were actually worse than apartheid South Africa. He followed  this disgusting libel with his infamous 2009 book “The Israel Lobby and U.S. Foreign Policy,” in which he claimed that due to “powerful political, economic, and religious forces in the U.S., Israeli government decisions are rarely questioned or condemned, voices from Jerusalem dominate our media.” We’re skirting awfully close to a protocols-of-Zion style argument here, that the Jews control the media and American foreign policy.

Here’s a priceless clip of Jimmy Carter on the Today Show.

Do you believe Hamas can be trusted?

Perhaps the clincher is Mr. Carter’s pronouncement that “the key factor that prevents peace is the continuing building of Israeli settlements in Palestine, driven by a determined minority of Israelis who desire to occupy and colonize east Jerusalem and the West Bank.” According to Carter, Palestinian terrorism, Iranian nukes, tyrannical Arab governments, and murderous Islamist religious militancy are not the causes for Middle East conflict. No, it’s the Jews.

What has surprised the world in Israel’s third war against Hamas since 2005 is how even countries like Saudi Arabia, Egypt, and Syria have not come to Hamas’ defense or criticized Israel. And when a country like Saudi Arabia and a brutal dictator like Bashar Assad have more moral sense than a former American president, you’ve got to wonder about more than his moral compass.

Shmuley Boteach, “America’s Rabbi” whom The Washington Post calls “the most famous Rabbi in America,” is the author of 30 books, including The Fed-up Man of Faith: Challenging God in the Face of Tragedy and Suffering. Follow him on Twitter @RabbiShmuley. 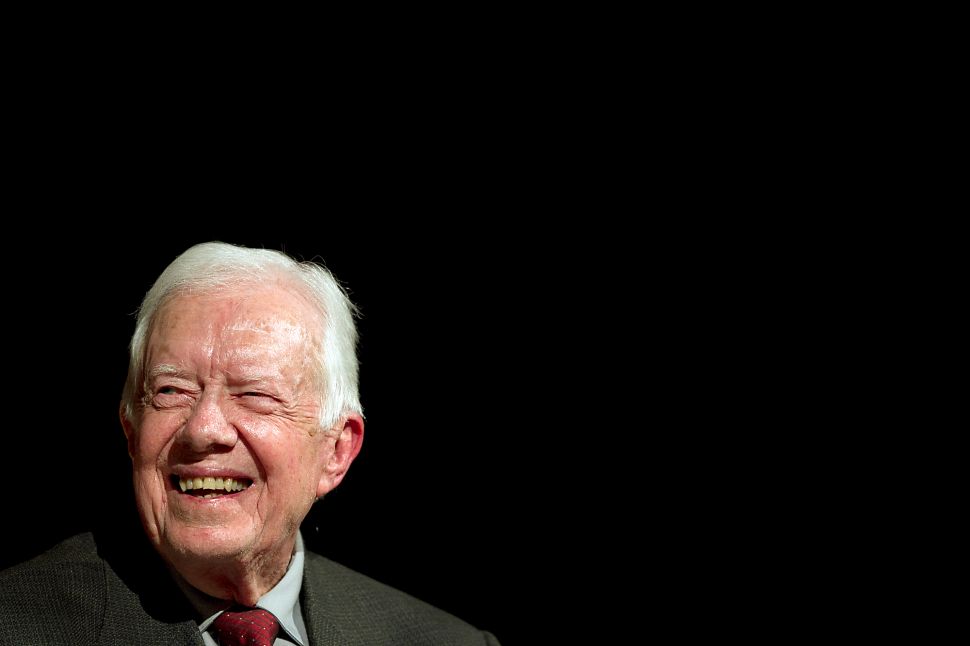