Presumably realizing that Chyka’s only had about 17 seconds of screen time this whole season, the producers kicked off this week’s episode with a peek into Chyka and husband Bruce’s adorable date night. Honestly, I can’t even make fun of them because they’re so darn cute — especially Bruce. “Our love affair has lasted 25 years very happily, and I enjoy every day I have with her, and I look forward to the next,” he says. Oh — and then he casually rents out an amusement park, and we wonder for a second if we’re actually watching the Australian version of The Bachelor.

Yes, Bruce, I accept all your roses.

It’s Janet’s birthday, and like any sensible three-time divorcee, she’s celebrating by fusing all her old wedding rings into one, giant uber-ring. “Nothing says you’re single like getting your old wedding rings melted down and getting a fabulous new piece of jewelry,” Janet says. You go, girl. The end result is literally the biggest ring I’ve ever seen. I think it’s even bigger than Kim Kardashian’s most recent engagement ring, which I honestly didn’t think was possible. I think I have something similar. Also, can someone please get that jeweler a manicure, stat?

In an attempt to make Jackie feel like she’s actually contributing to their business venture (a weird-sounding line of cocktails called “La Mascara”), Jackie’s annoying husband, Ben, sets up an arts and crafts project so she can design the company’s label. Ben’s friend, Aaron, has painted a pretty nice-looking picture of a woman, only to have to step aside and let Jackie haphazardly splatter paint, gold dust, and flowers on top of it. “When I was throwing those flowers and paint down, it was almost like a miracle had happened,” Jackie says, entranced. “On a human level it’s hard to explain it. I could feel the support of the angels and my loved ones who’d past away.” Ooookie dokie.

“Hey guys, check out this cool painting I made.” It’s time for all the girls — minus Lydia, who’s off skiing or buying more cheese or something — to get together for Janet’s birthday pregame! You know what would be fabulous? If everyone could get together and not talk about Gina and Jackie’s psychic feud.

But the world, unfortunately, is cruel, and so we have to listen to this garbage again. Andrea, the reigning Queen of Lameness, is still angry that Gina had the gall to confront Jackie at Jackie’s recent Mexican-but-not-too-Mexican housewarming party. Claiming it’s because she’s “into personal growth,” Andrea decides she needs to tell Gina her behavior was inappropriate — for Gina’s “own personal benefit,” of course. “It’s rude to confront somebody at someone else’s party.” Janet and Gina are WAY tired of talking about this crap (Amen to that), so they get up and go to the bathroom. If listening to this conversation isn’t how I want to spend my lazy Sunday afternoon, it’s definitely not how Janet wants to spend her birthday.

In the bathroom, Gina reams out Lydia, who she believes is the source of all the drama. Andrea, meanwhile, is convinced that Gina’s ranting about her, and vows to figure out what she’s saying about her. Sorry, Andrea — pretty sure she’s not talking about you.

As bad as the pregame was, the actual party looks pretty fun. It’s Gay Night at a bar called Love Machine, and everybody dances with a fabulous drag queen named A.J. “The difference between this drag queen and Gina is that this one was taller,” Andrea says. In case it wasn’t clear, Andrea is a miserable jerk.

Booking this place for my b-day next year.

Luckily for us, there’s more Andrea time! Andrea is writing a book about the “the highs and lows of being a working mum” — a sort of “revenge” book against all the people who judge her for not being home all day with her kids. Wow, Andrea, your life sounds SO hard.

Anyway, Andrea sets up a focus group to find out if other working moms agree with her parenting strategies. How does Andrea manage working and parenting, you ask? Apparently, she just hires a bunch of nannies and treats them like minions, forcing them to cook, clean, and do housework, even when Andrea’s home from work. Here’s the gist of the women’s reactions: Meanwhile, Janet and Gina don their most outrageous furs and go out to dinner to talk about Janet’s birthday party. The conclusion of their conversation is basically that Andrea’s behavior was totally rude. Gina also makes reference to a mysterious email. Details are scarce, but it sounds like she sent some sort of confrontational email to Lydia, and Cc’d Andrea on it. Whatever the case, we’re ready for the people on this show to fight about something new.

Next, Jackie goes over to Andrea’s house to eat some cheese and talk about Gina. Andrea confesses she called Gina up to ask what she said about her in the bathroom, and Gina claimed she’d actually been ranting about Lydia. Andrea doesn’t believe her, and is certain Gina was talking about her — partly because Gina was talking about somebody’s book, and Andrea’s the only one with a book underway. Lydia did have an idea for a book, but it was so insignificant, Andrea can’t possibly imagine that’s what Gina would be talking about.

“Either Andrea’s got it wrong, or Gina’s lying,” Jackie tells the camera. Ugh, is this the best drama this show can give us? Let’s step it up, Real Housewives of Melbourne.

Andrea might be lame, but I’ll be darned if she doesn’t make an A+ cheese plate.

Thankfully, Andrea, peacemaker extraordinaire, has a spectacular plan to repair everyone’s “fractured opinions” of each other: She’s going to invite all the housewives to a “a beautiful day of tennis and champagne” at her beach house. What could go wrong?

Remember Lydia? She’s finally back from Thredbo, and has decided it’s time to shell out a few tens of thousands for some new art. You know, I often feel the same way! Lydia and a friend check out a gallery filled with huge, glittery animal sculptures, which are actually pretty fantastic, tbh. “Wow, that’s actually quite reasonable,” Lydia says when the gallery attendant informs her the jaguar and bear sculptures cost $55,000 and $75,000, respectively. It seems a little crazy, but remember: This is a woman who takes a private jet just to buy cheese. This would look good in my Queens apartment, right?

Finally, Jackie accompanies Janet to one of Janet’s hoity-toity socialite benefits in some daunting-looking banquet hall. Jackie’s totally out of her element and says she’s never seen so many facelifts and nose jobs, but she seems to have a good time hanging out with Janet. Outside the banquet hall, Janet and Jackie talk about — what else? — whether Gina was talking about Andrea in the bathroom. Janet confirms to Jackie that Gina was, in fact, talking about Lydia, and Jackie says she’s never heard so much bitching in her life. 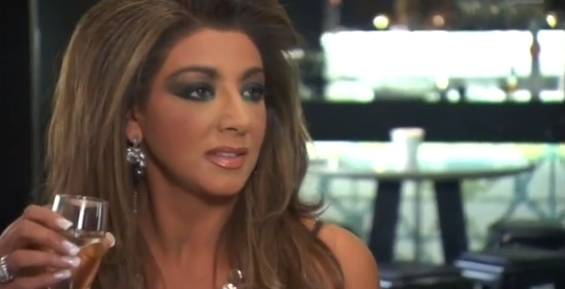