Full Disclosure: I did not (see: could not) make it through all of True Blood‘s ninth episode in one sitting.

I watch a lot of TV. A. Lot. And not all of it is good. In fact, a lot of it is really, really bad. I once binged an entire season of Once Upon a Time just because I was bored (fortunately my OUAT recaps are locked away in a  vault, buried somewhere deep on the Rutgers University campus). Even if that wasn’t true it is, in the most literal way possible, my job to watch True Blood. I get paid to do this.

But still, nope. Couldn’t do it. I was so bored, so. bored. that I just gave up with twenty minutes left and said I’d finish it the next morning. Which I did. Still sucked. Which would be absolutely understandable if this was like mid-season season two, but this is THE SECOND TO LAST EPISODE. EVERRRR. But there is only so much crying, and sentimentality, and hugging and “closure” I can take in one episode. This is the penultimate chapter of your entire story, True Blood, not a fucking yearbook signing party at the end of your senior year of high school.

So, grab a coffee and try and stay with me as I recap this snoozefest.

Bill is still refusing to drink Sarah Newlin’s blood because he’s still in love with his wife that died in 1885 or something. Either way, Bill’s just real into dying right now. Which, yeah, kind of blows for the people that love him but it’s still his choice, right? That doesn’t stop Sookie from flying off the handle and slapping him a whole bunch of times. I know he’s an ancient vampire and it probably didn’t hurt that much but, like, fucking cut it out. Then Jessica asks Bill to release her as her maker, which Bill happily does because he is just #OVERIT.

Also, I find it really hard to ever feel bad for Sookie because whenever something upsetting happens, she just clings lovingly to whatever undead ex-boyfriend happens to be standing closest at the time.

After hanging on to Eric’s chest for what I assume was the next four hours, Sookie and Jessica decide to search Sam’s trailer for some reason. Turns out he is already gone, but it’s cool he left notes. I mean, they killed Tara off screen, at least Sam got a letter-reading flashback sort of thing. So yeah, Sam and his unimportant yet pregnant girlfirend skipped town, which really leaves one question…who is the new Mayor of Crazy?

Back at Bellefleur’s, Arlene has the genius business decision of opening up shop and waiting for customers to arrive by having her friends drink all the alcohol and eat all the food without paying. “Meanwhile, the party will just have to be for us y’all, woooo” Arlene says, approximately three weeks before filing for bankruptcy.

Vampire James decides this Bellefleur’s party is the best time to clear the air with Jessica. Boy, I know it’s cliche to say that any vampire character “sucks,” but Vampire James is basically a charisma vacuum. Jessica and James understand each other now and Jessica is happy for him and zzzzzzzzzzzzzz.

Speaking of cliches, Hoyt is at home watching Nascar. Oh, and in other news, him and his girlfriend Bridgette are a horrible couple. “I’m real proud of you for being a hero and all,” she says sarcastically, referring to that time less than 24 hours ago that he saved four people from being horrifically tortured and killed. But she wants to have children some time in the future so this conversation needs to happen now.

Other news, Jessica has terrible timing. She shows up right in the middle of this argument because she needs to talk to Hoyt right now. Listen, nothing this show does will convince me that Jessica isn’t the selfish bad guy in this situation. Like, she hasn’t shown up to ruin Hoyt’s new relationship to remind him that they used to be super happy. She just needs him to remember that the last time they dated she got bored with his mama’s boy ass and fucked his best friend, and then he joined some anti-vampire group who almost convinced him to murder her.

But oh, it gets worse, because Hoyt is basically like “fuck you Bridgette this red-haired chick is way hotter and we totally used to date,” and essentially ends their relationship by going outside to talk to her. Hoyt and Jessica’s talk goes way too well, and they end up hugging. There is a lot of hugging this episode.

Back at Bellefluer’s, Adilyn and Sookie have a mind conversation that establishes Sookie is no fun. Arlene and Sookie then have their 15th heart to heart this season alone. “You don’t want my advice. Not when it comes to dating vampires,” Sookie says. That is genuinely the only intelligent sentence she has ever spoken. Arlene then convinces Sookie to sit down for a big group dinner, where no one wants to eat Big John’s dirty rice. (Side note: Poor Big John! He is the best character on this show. I would kill for a spinoff that is just the world ending outside of Bellefleur’s, and Big John is just unaffected in the kitchen whipping up some dirty rice).

“Think of Sookie,” Eric says. “But wah wah wah wah wah,” Bill replies, for an entire scene. Okay, what they actually talked about is why Bill is totally cool with dying. Basically he is scared because he had spooky Ring Wraith baby dreams. He asks Eric to talk to Sookie for him, to ask permission to “call on her,” and you have to be kidding me with this bullshit.

Jason shows up at Hoyt’s house, and Hoyt immediately punches him in the face. So Jessica gets a sweet hug and Jason gets punched in the face. That makes sense.

Bridgette somehow commandeers Jason’s police cruiser and drives him home. Jason, ever the gentleman, informs her that they aren’t going to have sex tonight. “I just broke up with Hoyt. I’m heartbroken,” Bridgette says. Yeah, whatever lady. You keep telling yourself that while making this face at Jason.

Back with Hoyt and Jessica, Jessica tries to give him the “I was young and immature” excuse, which is hard to pull off when you literally don’t age. She then heals Hoyt’s fist, which as you may recall he had recently used to knock Jason unconscious. Jessica doesn’t seem particularly worried about that. Remember when they had sex like three episodes ago, though?

Quickly switch back to Bridgette and Jason. Jason gets Bridgette a fantastic deal on a flight Alaska. This is how you seduce women. Bridgette calls him words like “sweet” and “kind,” which can’t be right because those words don’t mean “possibly mentally disabled?”

Jessica and Hoyt have whatever it’s called when you have sex after someone reminds you that she erased your memory. During their sex session, a voice-over plays of Jason describing exactly why Jessica and Hoyt are made for each other. It isn’t uncomfortable at all.

The big dinner party at Bellefleur’s lets out, and Eric is waiting for Sookie in the shadows. Actually, unnecessarily far into the shadows. I like to imagine Eric waiting for hours exactly like this.

Through some old-fashioned Eric persuasion (see: meaningful glaring), Sookie finally agrees to let Bill call on her. Yes, the show continues to keep using the phrase “call on her.” Eric offers Sookie a ride home. “You don’t have a car,” she says. Uh, duh, because he can FLY Sookie. No one else can fly, so they need cars, but Eric can fly so he doesn’t need a car.

Eric and Bridgette lie in bed together, not having any sex. We do learn, though, that Jason likes the color pink and would someday like to have children. But not a girl. These are the revelations we learn in the final episodes of True Blood.

Eric and Sookie land safely on Sookie’s front porch. “You can come inside if you want.” Jesus, Sookie. She really has just become a bouncy ball that bounces between whatever ex-boyfriend is convenient/standing close to her/not dying/not already dead at the time.

Eric, thankfully, declines Sookie’s invitation inside, but that doesn’t mean he doesn’t get him some. Back at Fangtasia, he finally gives in to Ginger’s series-long demands for sex. And it is a genuinely funny little three minute scene. Eric asking Ginger “are you going to be okay?” after she collapses like three seconds in was LOL-worthy. All this, and I only had to wait 50 minutes to be mildly entertained. You’re nailing this pace, True Blood!

After that, Eric walks down to the basement of Fangtasia to find that the Yakuza has subdued Pam with some silver chains. Say what you will about the Yakuza, but they are really good at subduing Pam with silver chains. Like, does Pam ever pay attention to her surroundings? Anyway, Mr. Gus Jr. is threatening Pam with a pretty complicated device made of ropes and a giant stake. (Side question! How long do you think it took them to set that contraption up? Can we get like a bonus video blog about the Yakuza building that thing and all the wacky hijinks that came with it?)

Long story short, Mr. Gus Jr. demands to know where Sookie lives, and Eric gives her up to save Pam. Maybe.

Sookie meanwhile waits for Bill to “call on her” (bleh) which is way more literal of a term than I thought because he calls her on the phone. She invites him over for a nice chat about why he wants to melt into a guts puddle so bad. He comes over, knocks on her door, and we’ll just have to wait for the THRILLING CONCLUSION next week.

Listen, enough with the bullshit True Blood. Next week better be nothing short of a Yakuza v. Vampire v.Faerie v. whoever the fuck else wants to join in shitshow. I mean like blood, and guts, and maybe the were-panthers come back to bite someone’s face off or Alcide’s naked ghost shows up to just get shot again. I don’t know. Anything. Just please no more people lying in bed together or sharing dinners or otherwise doing things that I would never want to watch them do in real life. Because that stuff is boring.

Oh, one more thing I want from the finale. Between the Eric-Sookie-Bill love triangle and Hoyt-Jessica and Jason-Bridgette nonsense, there’s only really one person who deserves to be alive at the end of all this, happy and triumphant. And I think we all know who that is. 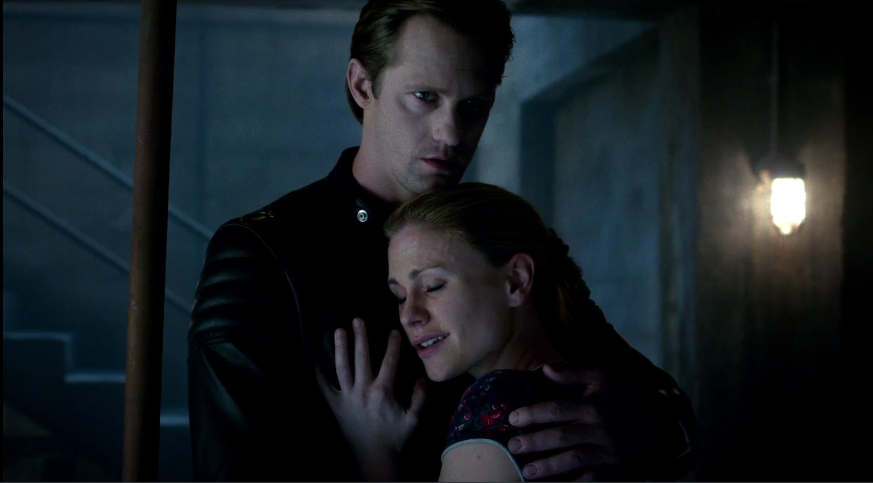