Found on his phone. (Photo: ActionNewsJax/Police)

Yesterday, like several other news outlets, we wrote about the 2012 murder case involving Pedro Bravo. It was believed that he might’ve asked his iPhone’s personal assistant feature Siri where to dump the body of his “roommate” Christian Aguilar. Well, it turns out that made for a better headline than the actual story.

According to WUFT-FM in Central Florida, the detective never said Mr. Bravo that he used Siri to dump the man’s body. Police allegedly found that image of Siri (above) in a cache of “hundreds” of images that Mr. Bravo looked at on his Facebook account. That doesn’t mean he conducted the search as it simply could’ve been something he’d found online. Back then, if you asked Siri about how to dump a body, it would respond with that “joke,” which has since been removed.

Furthermore, Mr. Bravo had an iPhone 4. Siri wasn’t available on that model.

Lastly, they weren’t roommates as the original report from WJXT-TV in Jacksonville reported. Rather, Mr. Bravo was allegedly angered that Mr. Aguilar was obsessed with his ex-girlfriend. So, after taking him to a Walmart to pick up a Kanye West album, he allegedly drugged and strangled him. 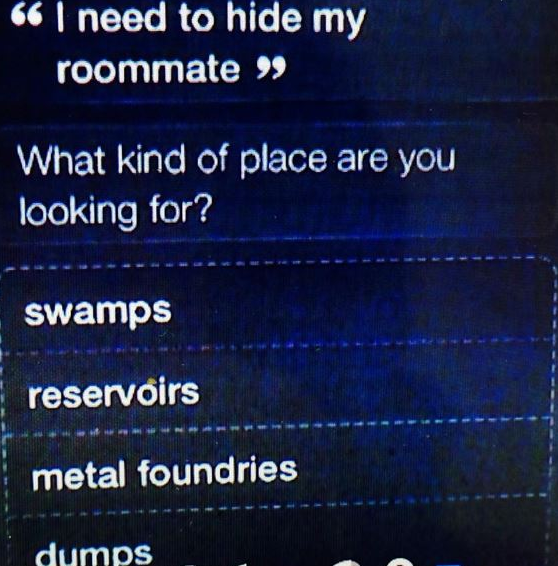