Ballboys at the US Open (Photo by TIMOTHY A. CLARY/AFP/Getty Images)

For three years, I worked the U.S. Open courts as a ball person. I wasn’t the quickest. I didn’t have the best hands. But I was super-focused, and I had an above-average arm. I wound up working a match in Arthur Ashe Stadium and being runner-up for Rookie of The Year. I was surprised too that such a title exists.

My most memorable Open moment came on the soon-to-be-extinct intimate Grandstand, which was packed to see James Blake, the big-serving American who reached as high as 4 in the rankings. Blake cranked a 115 mph serve, and I didn’t put my hands up fast enough to protect myself because I didn’t want to interfere with a potential return of serve. Blake’s opponent never got near the ball. Instead the ball hit me square in my lower abdomen ­but appeared to go a bit lower. As the packed Grandstand crowd roared, I stood stoically, refusing to become even more of a distraction. As a U.S. Open ball person, you’re supposed to facilitate the match and be invisible.

In no particular order, here’s some insider info on what goes into being a U.S. Open ball person.

1.) If you’re a Back, a ball person that’s positioned behind the service line, you must be able to throw a ball pretty well. You have to throw the ball the entire length of the court, and the ball must arrive to the receiver on one bounce. (At the other Grand Slams, the Backs roll the ball to the middle of the court and the Nets roll it the rest of the way.) When the Back tosses the ball to the server, it must be soft and delicate and arrive on one bounce as well.

2.) Australians are some of the rowdiest and most fun fans out there. They revel in cheering anything and everything, including the ball people. God bless ’em.

3.) There’s a crevice between The Grandstand and The Louis Armstrong Stadium that serves as Ball Person Central. Here, pep talks, tongue lashings and assignments are given. If you’re looking for a behind-the-scenes taste of the Open, this is a good place to loiter and eavesdrop.

4.) Ball people work two hour shifts before they’re relieved. This is absolutely necessary, as more than a few ball people have been known to faint mid-match. It can get very hot on the hard court.

5.) Each ball crew of six has a leader, a crew chief. It’s largely a ceremonial title ­ with no ceremony. In my second year, I was a crew chief. Besides confirming that we had a full ball crew on hand, I did little else as crew chief.

6.) Rookies work the outer courts. Veterans work the television courts, including Arthur Ashe Stadium. Most of the Ashe ball people have been running after balls for more than a decade. Don’t call them ball kids because they’re not.

7.) Ball people get a nice per diem for lunch and other snacks. You need fuel to run after those balls. But don’t overindulge. You don’t want to leave it on the court.

8.) Following a match’s final point, ball people must not move from their positions until the players have shaken hands.

9.) Ball people are forbidden from talking to players. However, the players may speak to the ball people. The players rarely speak though. They nod or signal with their racquet ­and they grunt a lot, especially the women.

10.) If a player vomits — it happens — the ball person shouldn’t touch the mess under any circumstances. This is the domain of the court attendants. The ball person must handle the balls, and the balls must remain perfectly yellow. 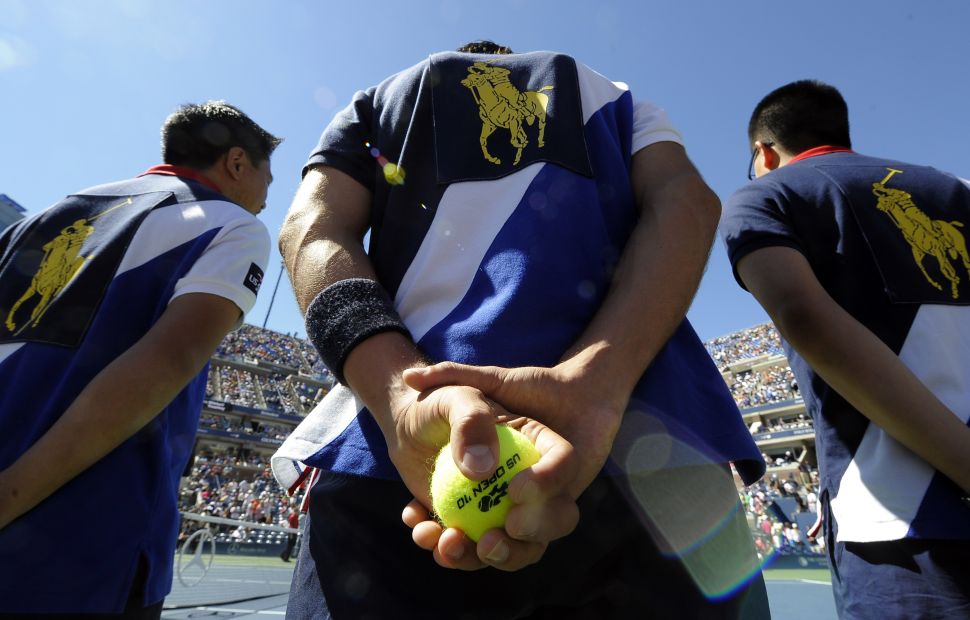