Ralph Lauren has been the official outfitter of so many sporting events for so long it’s become almost inherent. Of course our golfers, swimmers, and U.S. Olympic Team will sport the iconic polo playing man. Ralph Lauren is no stranger to the tennis court, either: in 2003 it was the first official outfitter of the Wimbeldon tournament, and in 2005 it became the same for the U.S. Open.

So it was no surprise that on a drizzly day in late June the hundreds of hopeful U.S. Open ball people– that’s right, the people who retrieve stray balls during the game– would be trying out for the position dressed in head to toe Ralph. What was surprising was how rigorous the experience was.

“It was harder than I thought. I felt like I was back in gym class trying to have hand eye coordination,” said Anna Hecht, 21, who was one of the first people to try out. As part of the process, hopeful ball people were dressed in the official Ralph Lauren outfit and subjected to a 15-minute test of speed, stamina, and coordination. An estimated 400 people auditioned but only 80 were selected for the coveted position.

The test included retrieving balls, throwing the balls, and catching a barrage of the balls, all while periodically sprinting around the court. Ball people need to be fast and precise. U.S. Open officials carefully observed from the sidelines.

“They shouldn’t even be noticed,” said one official, who was shouting drill sergeant like commands at the participants. “Gone in a flash.”

According to the official, when not dashing cross-court, ball people need to stand in stoic stance, hands clasped behind their back. No fidgeting– this is tennis, after all.

Despite the flushed faces and sheen of sweat, the participants looked exceptionally chic in the outfits. The outfit color scheme is classic French navy with hints of yellow, red and green in sporty stripe details. The clothes are made from special “airflow” jersey, with ergonomic body seaming designed for maximum movement and breathability. The tops for men and women feature a big yellow pony logo on the back and the U.S. Open logo and smaller pony on the chest. Women wear a moisture-wicking jersey skirt, while the men have jersey shorts.

“I felt like I was in cheerleading again, with the skirt,” said Ms. Hecht. “But it was comfortable, slick. Even flattering!”

Justin Smith, 24, another participant, was surprised at the level of coordination the job requires.

“When you watch on TV it doesn’t look that hard– so I thought,” he said, panting. “But when you’re on that court, balls flying at you a million miles an hour you realize how quick it all is.”

For the lucky few who made it to the final rounds and were selected, the position not only means the chance to perform in front of the hundreds of thousands of viewers– it’s also about being beside many people’s tennis idols.

When the games begin, pay close attention to that flash on the screen. They may only be there for a few seconds, but it took that ball person a lot to get there, and they will look fabulous. 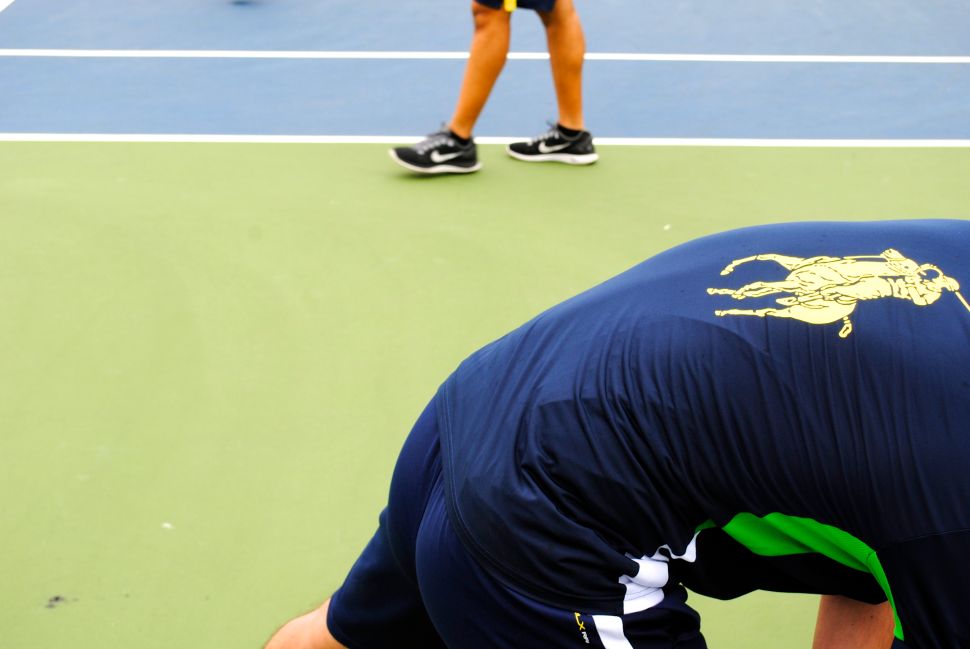