“At the end of the day, you can’t go faster than the music.”

The words of coach Sam Sumyk have been ringing in Victoria Azarenka’s ears with unwelcome regularity for much of the past six months as the 25-year-old rages against the limitations of her body.

Twelve months ago, it was a different story. Azarenka arrived in New York as arguably the best player on the women’s circuit, having just beaten Serena Williams in three compelling sets to claim the Cincinnati title. Two weeks later, it took a remorseless display of power hitting from Williams to prevent her from claiming her first US Open title.

These days Azarenka is ranked 17th in the world, thanks to a stubborn foot injury that kept her off the tour between March and June and limited her to just 18 matches this season. Despite reaching the final at Flushing Meadows the past two years, only the Belarussian’s most optimistic supporters expect significant progress this time round.

“It’s hard to tell exactly what her level is right now,” Sumyk says. “As a coach watching from the side, I really have mixed feelings. Sometimes I feel that if she wins a couple of matches and gets going, we’re right in there. She’s in it and she’s right back to where she was before. But there’s also days where I feel ‘Oh shit,’ we’re really some way off from mixing it with the top guys.”

Azarenka first noticed something amiss during a practice session three days before the Australian Open. A scan revealed nerve damage and increasing inflammation between her toes. For a player known for on-court intensity bordering on the psychotic, and whose desire to win has seen her play through visibly painful injuries before, withdrawing would likely have been even more excruciating, so Azarenka competed in Melbourne, reaching the quarter-finals. However, a week and a half of pounding in temperatures that reached 109 degrees, took its toll. She would play only one more match until June.

“It obviously wasn’t easy for her. Those type of players, they just want to compete”, Sumyk says. “They’re competitive beings, and when they’re injured, you take their life away from them.”

Azarenka often describes stubbornness as one of her strengths, but as an unwilling invalid, it proved her Achilles’ heel. Her layoff was prolonged by unwisely playing in March at Indian Wells, where, clearly struggling with her movement, she inflamed the injury further during a straight sets loss to world No. 66 Lauren Davis.

“The toughest part about the time off and my rehab in particular was that I didn’t know when I was going to be able to go on the court, because it was mostly a day‑to‑day progress and how it was going to feel,” she reflects. As her ranking plummeted, it would have been easy for Azarenka to feel sorry for herself, but urged by her coach, she immersed herself in a lengthy recovery regime.

“Whenever you take any time away from the game, the others will always move on and steal a march on you. That’s life on the tour, you’ve got to accept it,” Sumyk told his charge. “This is a sport where there’s no room for tears. You’ve got to put everything else to one side and just focus on yourself.”

Once Azarenka accepted the need for rest, she threw herself into regaining her health with the same forcefulness that propelled her to the top of the game, traveling to Los Angeles, Germany and New York in search of treatment. As she neared recovery, she reveled in finally being able to spread the toes on her left foot again.

“I ran and I screamed in the hallway, like, I don’t know. I’ve never been so happy in my life,” she recalls, laughing.

But greater tests were to come. Fit to compete on grass again, Azarenka returned to the game with adolescent exuberance, but little-known Serb Bojana Jovanovski curtailed her Wimbledon hopes, Venus Williams was too strong in Stanford and Agnieszka Radwanska brushed aside her one-time rival in just four games in Montreal.

“Players tend to forget that once they feel physically fine again, it will still take a while for the results to come,” Sumyk says. “It’s the same for everyone. You still need to go through your repetitions, your practice court drills, all of that stuff in order to feel sharp now and get back to your previous level.

“What’s difficult to deal with then is the impatience. You want to be back at your best and competing at your previous level, but that’s not possible yet. And impatience leads to lots of different feelings—frustration, a bunch of other emotions. But it’s really important to get back to a stage where you can play your best tennis and the only way is by putting in the hard yards, playing a lot of matches and doing a lot of work on the training court.”

As the weeks have gone on, Azarenka has become progressively tetchier, snapping like a caged tiger at reporters who dare to enquire about her health and the state of her game.

“It’s a matter of getting timing back, reaction speeds and building that base of consistency,” she says. “That’s the toughest part, and it’s a process. When you come back you expect the results to be right there where you left off.”

Sumyk has been coaxing her to change. “What’s important is not to think like that,” he says. “You just have to think about getting back on your feet. If you do that and you play matches consistently, the level will follow.”

Needless to say, Azarenka’s appetite for the fight has hardly been sapped by time away. Flushing fans need only observe her incessant grumbling and self-excoriation, demanding more intensity, more consistency, faster footwork.

“Her competitiveness, her toughness, her heart on the court, that will always be there,” Sumyk says, “I’m not worried about those. These type of players, they’re like machines. You put them in the arena, give them a challenge and they’re right there. They’re raring to go. You can’t destroy that, no matter how long the injury layoff.”

And while the results may not come as quickly as she would like, Azarenka has her sights firmly set on a rosy future. “I have a little bit of extra motivation,” she told the media recently. “I just realize I love tennis that much.”

“Everything is there now, the health is there, the fitness is getting there, the shots are definitely there,” Sumyk adds. “We just need to finish putting the puzzle back together. We’ve worked pretty well for the past couple of months and hopefully that can continue for the rest of the year. Lets see her compete on a regular basis and then see where we are come November.” 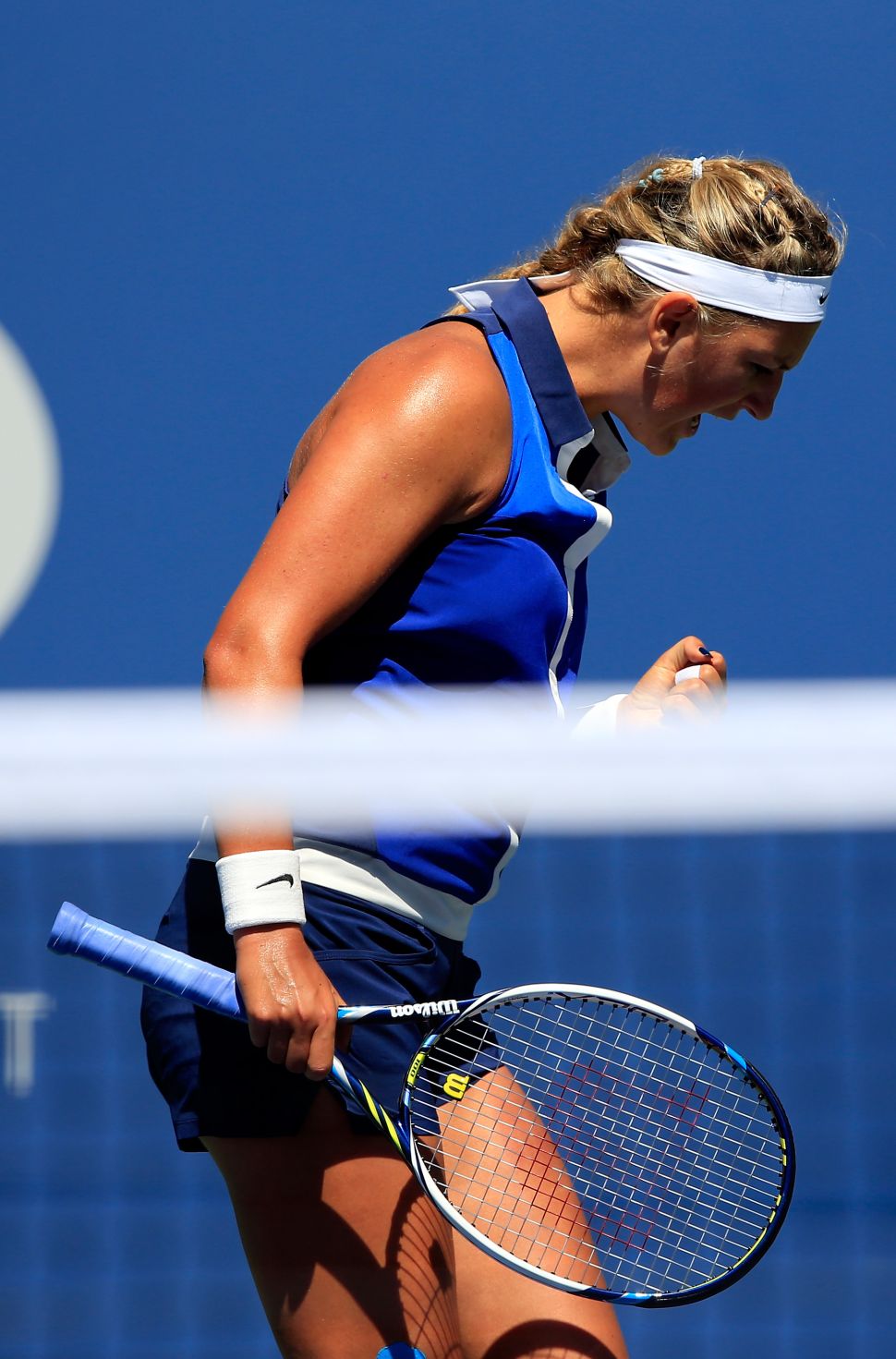