WEST NEW YORK – When local pain specialist Dr. Felix Roque delivered U.S. Rep. Albio Sires (D-8) from discomfort and restored him to the golf course, the congressman in return indulged the political fancies of his friend, which wound up causing Roque a world of hurt.

But that was then, this is now, and those same insiders high-fiving one another at the sight of Roque in leg iron agony last year, tonight showed up in respectful reappraisal of West New York’s mayor eight months before his scheduled re-election.

“He’s a good guy,” leered a face at the bar in Son Cubano, and one could almost hear the nasal narration of Ray Liotta expounding on that point.

One half expected Paul Sorvino to show up and tousle Roque’s hair.

“You can only do it by earning it,” sized up U.S. Sen. Bob Menendez (D-NJ), who acknowledged that he and Roque started their relationship on rocky terms, made most shockingly manifest when the mayor backed the incumbent Democratic senator’s Republican opponent in the 2012 U.S. Senate race.

“You have earned respect,” the senator added, insisting it was good government – the town’s A-1 bond rating and zero tax increases – that produced the good feeling demonstrable tonight.

But others sprinkled in the crowd gave a wink to other character building furnaces.

Thrown through the criminal justice ringer, Roque possesses the street cred his medical smocks and U.S. Military uniform initially failed to transmit in this world of backroom threads.

“I think he was an army general, what was he?” said state Sen. Nick Sacco (D-32), taking the mic from emcee Joey Muniz.

“A colonel,” someone called from the crowd.

“A general,” said Sacco, doubling down. “He’s no longer a general because he found that consensus works.”

A woman in a white dress played “The Girl from Ipanema” on a violin, but the theme from “Chariots of Fire” might have befitted the presence of former Mayor Silverio “Sal” Vega, who happily nursed a drink and radiated a peaceful vibe as he discussed high school track triumphs in a crowd that included Assemblywoman Angelica Jimenez (D-32), Weehawken Mayor Richard Turner, former Union City Mayor Rudy Garcia, and former state Senator Bernard Kenny.

“He’s the mayor, he’s going to be the mayor,” said Vega, who last year looked like a possible challenger to the man who beat him in 2011.

Now it’s up to Commissioner Count Wiley and lame duck Freeholder Jose Munoz (his June Primary conqueror WNY Commissioner Caridad Rodriguez was in the room) to summon renegade challenges of an incumbent with overwhelming establishment insulation.

There was an ongoing theme of Hudson County domination, with the structures evident here tonight presumably those that will be in place to catapult Jersey City Mayor Steve Fulop into the 2017 gubernatorial arena.

Speaker Vinny Prieto (D-32) began a conversation by referring to the state having to do something about the Transportation Trust Fund (TTF).

Does that mean Prieto intends to join Senate President Steve Sweeney (D-3) on a statewide swing to generate interest in the issue?

“I’ve been talking about this issue from the beginning of the year,” he said, before huddling with Fulop.

A central figure in the room, attorney Donald Scarinci, West New York counsel – relatively newly minted – and Menendez’s childhood friend – looked to be grandly straddling Roque and Fulop world and reveling in comments like this one, from Hudson County Executive Tom DeGise: “We are ready to take on anybody at this point. The road to Trenton goes through Hudson County.”

The veteran DeGise’s 2015 re-election cycle is partially the reason why everyone’s eager to channel a Gandhi mood. Up for re-election himself next year with as yet no challenger in front of him and rambunctious Freeholder Bill O’Dea hovering but at risk of infuriating Fulop, DeGise knows the ambitious Jersey City mayor doesn’t want to incite a war with his base.

But ironic that it should be Roque tonight humbly telling the crowd of Hudson County power brokers how honored he was to have their support.

A renegade to begin with, ostracized by the establishment with a twist when he backed Kyrillos pre-indictment on federal hacking charges, with scorn when he reversed the endorsement, then with a vengeance when he looked like jailbait, the mayor may have epitomized the biggest comeback of recent New Jersey political vintage as he beat the charges last year and now posed for pictures with Sacco, Menendez, his always sturdy friend Sires, DeGise – and Bayonne Mayor Jimmy Davis, the latest addition to the constellation of Hudson pols.

Even Hoboken Mayor Dawn Zimmer hobbled into the fest, and Union City Mayor Brian P. Stack was said to be “on his way,” although a sidewalk source later said he never showed.

Operative du jour Joe DeMarco could be seen in the crowd, not far from veteran Paul Swibinski.

Organized in part by Roque campaign manager Pablo Fonseca, it was all over in an hour.

The black sedans pulled in at roughly the same time, rounding the circular brick drive that provides a full view of Manhattan’s west side, efficiently disgorging the characters who made their way inside and hailed Roque.

Then they pulled out.

“I will bet anything he will be really successful in the next election,” Sacco said of the West New York mayor.

But it was the appearance of former Hudson County Democratic Organization (HCDO) muscleman Menendez here that finally stunned.

Married and newly moved to Paramus, the leafy Bergen version showed a forgiving side.

When it came to Roque, the local law contract for a school yard pal apparently reinvigorated a Christian impulse in the Hudson born power house.

Vigorously shaking the mayor’s hand with Scarinci looking on in the background, the senator announced to the room at large, “We believe in redemption.” 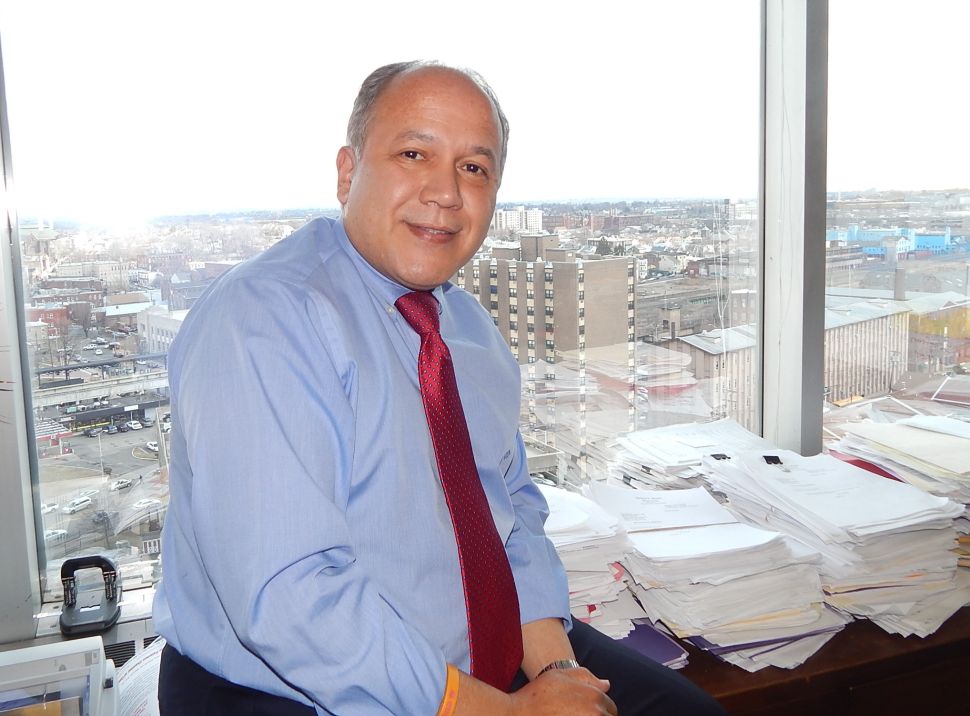