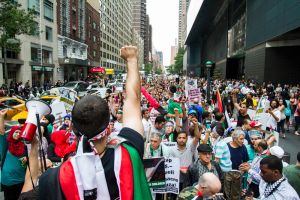 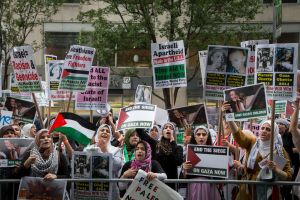 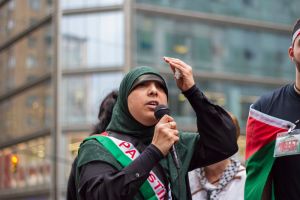 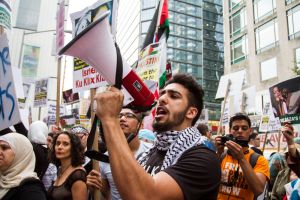 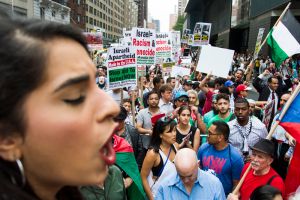 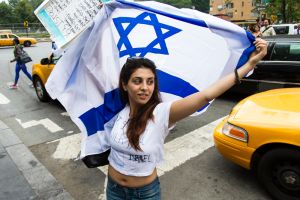 A counter-protester demonstrating on behalf of Israel. (Photo: Daniel Cole) 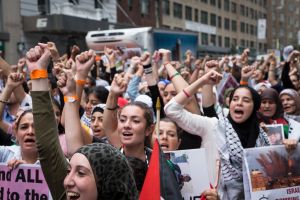 A rally for a Palestine in Columbus Circle. (Photo: Kaitlyn Flannagan) 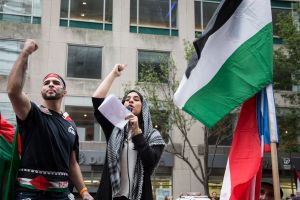 A rally for a Palestine in Columbus Circle. (Photo: Kaitlyn Flannagan)

They didn’t have the star power of prominent elected officials, but around 1,000 activists took to the streets of Columbus Circle to rally for Palestine and call for the end of U.S. support to Israel.

The crowd at the event — dubbed the “Mass Rally to Stand Up with Gaza Against Israeli Crimes” — waved Palestinian flags, held signs blasting Israel as an Apartheid and terrorist state, and vowed to keep marching in support of their cause.

The large group, which gathered outside CNN’s offices and planned to march to the offices of Fox News, offered chants of “Free, free, Palestine” and other slogans, some name-checking Israeli President Benjamin Netanyahu. A smaller group of counter-protesters gathered out of sight on the other side of Columbus Circle, waving Israeli flags and anti-Hamas signs.

Speakers and signs in the crowd also slammed the United States government for its support of Israel.

“Every shell, every missile raining down on the people of Gaza is provided for free from the United States,” Bill Dores of Al-Awda, the Palestinian Right to Return Coalition, told the crowd.

The pro-Palestine rally Friday was just the latest in a series of demonstrations held in the city since violence erupted between Israel and Hamas in Gaza. At a City Hall rally for Israel last month, pro-Palestine protesters sought to drown out the elected officials who spoke out in support of Israel, and slammed the local officials for speaking on behalf of New Yorkers who might not agree with them. Last week, a larger crowd of thousands at a rally for Israel effectively dwarfed counter-protests.

But while the rallies for Israel have drawn national and city political figures like Senator Chuck Schumer and Comptroller Scott Stringer, the rally for Palestine today did not pull in big names. Instead, a crew of activists took turns speaking to the crowd from the bed of a pickup truck parked in front of them.

“It’s because Wall Street and U.S. empire supports totally, unconditionally, Israel in all of its criminal enterprises, and it always has,” Ms. Flounders said when asked about the lack of big-name support.

Though there was fewer bold names, the rhetoric was plenty fiery. Mr. Dores called the Israeli government “Nazis” for their actions in Gaza, and slammed media coverage of two Israeli soldiers killed and another who most news reports have referred to as having been kidnapped or abducted.

“He was not abducted — he was captured in war,” Mr. Dores argued.

With the setting of the rally outside CNN, he wasn’t the only one to complain about the media coverage. Larry Holmes of the People’s Power Assembly said with many dead civilians in Gaza, the coverage of the day has still been focused on the Israeli soldier.

“This is all that you hear on the news,” he said. “It’s just so unfair. It’s so unbalanced.”

While the counter-protest was around the corner, the demonstration was not without clashes. Two women, one draped in an Israeli flag, engaged in a lengthy shouting match with the demonstrators until police broke it up. Another woman approached reporters and urged them to tell all sides of the story, recounting her experience on a bus in Israel she said was blown up by a bomb placed by Hamas.

“Palestine can free itself! Israel forever!” one passerby shouted to the crowd.

And down the street, pro-Israel protesters held signs pinning the blame for civilian deaths in Gaza on Hamas, and calling, too, for a free Palestine — one free from Hamas, which governs Palestine and is considered a terrorist organization by the U.S.

At the smaller counter-rally in support of Israel, Noa Cooper of Washington Heights said Israel “often has very bad P.R.”

“We want to show the world that Israel is important,” she said.

Watch video from the protest below: 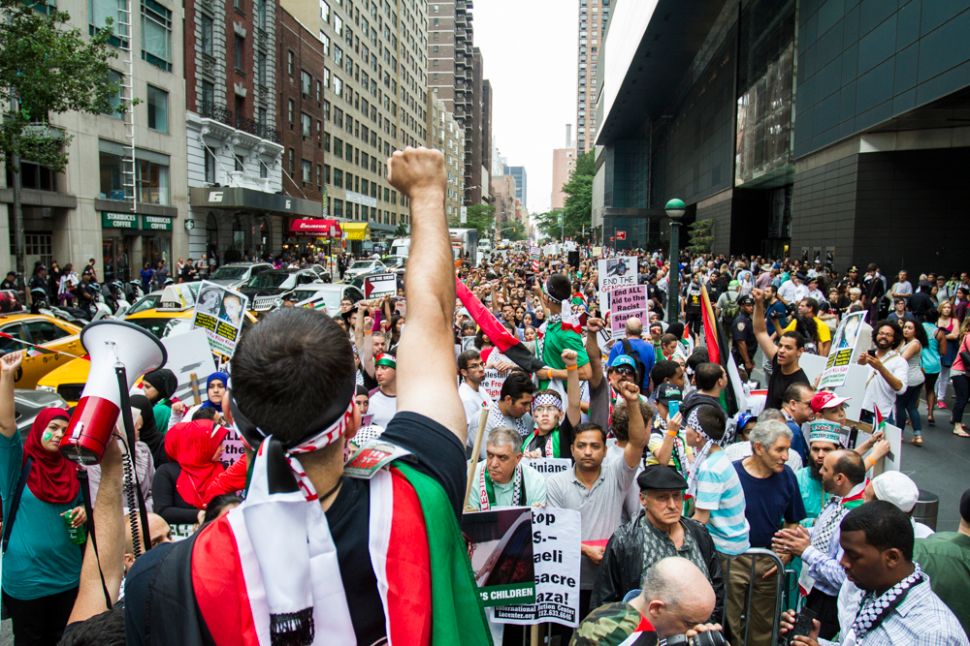