These days, brides are getting creative. Pictures of women clad in their wedding dresses as they submerge themselves in pools, kiss their grooms in the crashing surf, and throw powder in Holi-inspired post-wedding photography sessions have all made their way onto Pinterest boards across the county. But three New York newlyweds are changing the “trash the dress” trend.

Newlyweds Randi Seltzer Bonica, Diana Amoroso, and Melody Sherman, who are spread out across Manhattan and Brooklyn, have been recycling their dresses and taking their white gowns on “dates.”. From putt-putt golf to Shake Shack to happy hour, they keep up with their bridal escapades on their blog, Trash(ed) in the Dress.

“Originally, we were doing happy hours but we didn’t want to just say we’re going out and getting drunk. So we thought, what are the things in the city we would like to do but we haven’t done?” Ms. Sherman told the Observer. “We plan things that we would do on a girls night out. We don’t plan around the dresses.”

Ms. Sherman admits that her first few times out with the Trash(ed) crew, she felt a little uncomfortable. But wearing her white off-the shoulder gown to play ping-pong and into bars turned out to be more than she could have imagined.

“You realize that you are in New York City and there are weirder things going on around you,” she said. “You’re doing it in a city where you can get away with pretty much anything.“

The blog, which started officially last December, was the brainchild of Ms. Seltzer Bonica, who, not quite bold enough to wear her dress out alone, invited her co-worker, Ms. Amoroso, and Ms. Sherman, whose husband she knew from childhood. But there was one small glitch. Ms. Sherman–who married her husband at City Hall, in a knee length blue dress showing off her baby bump–didn’t have a dress.

“We went to David’s Bridal and we didn’t tell them that I was already married. We made up this elaborate story that I was going to have a destination wedding and wanted something beachy,” Ms. Sherman said. “It was definitely something that I’ll remember.”

And the ladies don’t take on New York’s neighborhoods on their own. The white-clad trio is shadowed by a photographer who captures their escapades. Martina Micko, the blog’s first photographer, was hired after answer their Craigslist ad.

“People would come up to them and you know go “Oh, are you getting married,” or like “what is this, a big group wedding.” They were all curious what we were doing,” she said of her time with the women. “You spend all this money on this dress that you love and you only wear it literally for one day. Why not do something fun and wear it again?”

Even for Ms. Sherman, whose dress was bought post-wedding, the outings only add to the specialness of wedding dress.

“I get to relive those memories of that special day. To hear people yell and give you that confirmation only makes you feel more confident in the fact that you love your dress just as much if not more,” she said.

For many brides, what keeps them from partaking in the trash the dress trend is their worry of cleanliness. But, Ms. Sherman said, that isn’t even a concern for the group. Ms. Seltzer Bonica tore her tulle at a Brooklyn pop-up dinner and Ms. Sherman spilled on her dress on their first outing.

“Randi and Diana are in a couple thousand dollar dresses walking around and schlepping it through the snow. In your mind, you’re like, ‘oh my gosh how could you do this,’” she said. “But it doesn’t even occur to me that it might be getting dirty. I’m creating another memory.“

Though the three women use their time in their dresses to make sure they see each other each month, they’re hoping more women will join their pack. Unmarried friends have worn bridesmaid dresses to past events and Ms. Seltzer Bonica’s mom even made an appearance.

With six months of wedding dress bliss under their belts, Ms. Sherman, Ms. Amoroso, and Ms. Seltzer Bonica see no end in sight for their bridal adventures. They traipse through New York unabashed now and look forward to their events, which start back up this month.

“We get people yelling from across the street, ‘Congratulations!,’ Ms. Sherman said. “We just to yell back, ‘Thanks, but we’re already married!’” 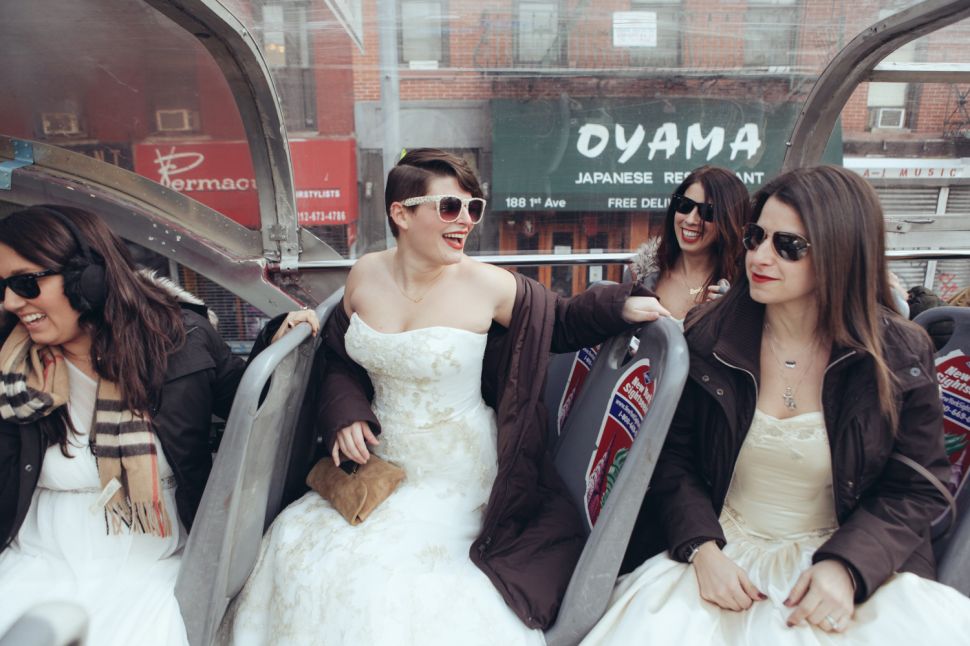