Robin Haase of the Netherlands (Photo by Julian Finney/Getty Images)

Today, the U.S. Open gets underway at Flushing Meadows, but thanks to injury, shaken confidence and an erratic summer, the tournament begins with more questions than answers. For both the men and the women, this year’s championship might be less about who can dominate and more about who can best fend off nerves, fatigue, doubt, audacious challengers and faltering bodies.

Perhaps that sounds like any tournament, but this open is not like the French one, where Rafael Nadal has won nine times, or the green lawns of Wimbledon, where Roger Federer and Pete Sampras have hoisted the trophy more than any other player in the modern game.

This year, top players are more vulnerable than at any time in recent memory, which can make for drama in early rounds, as underdogs take down big names. But later on, when players who aren’t ready for the big stage find themselves in the finals (think: Eugenie Bouchard, who was trounced in this year’s Wimbledon final 6-3, 6-0 in 55 minutes by Petra Kvitova) it can be disappointing.

Let’s start with the defending champions. Rafael Nadal, the southpaw who dominated much of last year after returning from knee surgery and climbed all the way back to number one in the world, will be sidelined yet again, this time with a right wrist injury.

Serena Williams, who only dropped one set in the entirety of last year’s Open, would be the favorite in almost any tournament she enters. But the world number one has struggled badly in each of this year’s majors, not advancing in any past the round of 16. At Wimbledon she exited in the third round, which was followed by the bizarre episode in a doubles match in which she appeared completely disoriented, double-faulting four points in a row before being whisked off the court by her older sister, Venus. Williams appears to have recovered nicely, though, winning two of the three tournaments she’s entered in the hard court season leading up to the U.S. Open. For Serena, the challenge may be balancing the will to win and the nerves that accompany it.

Since 2005, 36 of the last 38 majors have been won by Roger Federer, Novak Djokovic, Rafael Nadal or Andy Murray. This year, even with Nadal out, it looks likely to remain with this group, but probably only Federer or Djokovic this time.

Andy Murray, the Scot who won at Flushing Meadows two years ago, hasn’t regained his form or confidence since returning from back surgery earlier this year. He isn’t striking the ball badly, but it’s clear he hasn’t regained confidence in his body, a problem for a player who takes pride in rigorous training and the physique that comes with it (more than once he’s flexed his bicep after winning a big point). If the seedings play out, in the round of 16 Murray would meet France’s Jo-Wilfried Tsonga, who has had a streaky year but plays well in New York and beat Murray in a tough three-set battle in Toronto this month.

Djokovic won the last major, Wimbledon, in a thrilling five-set victory over Federer, but has been shaky in the hard court season leading up to the U.S. Open, with just a .500 record since Wimbledon. It’s hard to imagine he won’t regain championship form, but he will be tested early and often in his quest for a second U.S. Open title. In his half of the draw, he has Murray, Tsonga, Milos Raonic and Australian Open champ Stan Wawrinka after getting through what should be routine early rounds.

Roger Federer may be the player coming into Queens with the most consistent level of play, even if he hasn’t won a major since Wimbledon in 2012. The five-time U.S. Open champion has a very favorable draw and shouldn’t be tested until the quarterfinals, when he will likely play Grigor Dimitrov, then David Ferrer in the semifinal. The keys for Federer are his ability to minimize runaway sets that extend his time on the court, his persistence in playing aggressive without pressing, and his footwork. The last one might seem strange for a player known as one of the best movers in the game. But genius angles and measured point construction are predicated on court position, and the potential for fatigue makes minimizing court time in early rounds that much more important.

World number four Stan Wawrinka, one of two players to get past the quartet this year with his Australian Open victory, has been flat and seemingly unsure of himself since January. The man with perhaps the best one-handed backhand in the game would have to play world number six, Canadian Milos Raonic, in the quarterfinals, should they both get that far, and it’s not clear Wawrinka can pull out that win.

The challengers to the top tier are solid, but it’s not clear who has the tools to push all the way to the finals. David Ferrer has floated between three and six in the world over the last few years, but the 32-year-old Spaniard has said he doesn’t believe he can beat the top three when it matters most. Raonic has a big game well-suited for the hard courts of the U.S. Open, but seems to lack confidence against top players. Grigor Dimitrov, a Bulgarian who has risen steadily for the last two years, is itching to make his mark on a major. He would have to beat Roger Federer, upon whom he modeled his own game, in the quarterfinals to match his semifinal run at Wimbledon this year.

On the women’s side, there are perhaps even more questions than on the men’s. None of the top women enter as the clear favorite.

China’s Li Na, the third ranked player in the world and this year’s Australian Open champion, is out with an injury.

Simona Halep has climbed the ranks since winning her first WTA tournament a year ago, and has by far performed the most consistently in 2014. She’s now outranked only by Serena, proving she belongs in the final four of the Grand Slam events. The only thing she seems to lack is the experience of holding the winner’s trophy and the confidence that goes along with it. The Romanian baseliner is a confident player, but wasn’t quite up to defeating Maria Sharapova in this year’s French Open.

Sharapova has struggled all year, playing more three-set matches than in previous years. That she continues to win speaks more to her nearly unmatched competitiveness than it does her level of play. Still, fighting through two weeks in Queens is tough for anyone. The keys are her serve, which can take long vacations from her matches, and her ability to control the tempo of points, as well as matches. If the seedings hold up, she’ll face Halep in the quarterfinals. Sharapova leads that head-to-head 5-0, but this could be the time Halep breaks through.

This year’s Wimbledon champ, Petra Kvitova, heads into Flushing Meadows with confidence having won the last major, as well as last week’s tune-up in New Haven. The Czech lefty with the flat groundstrokes is well-suited for the Open courts, but inexplicably hasn’t performed well there. More than any other top competitor, perhaps, she’s a confidence player, which leads to erratic results. If she can maintain consistency, she has a very manageable draw that would land her in the semifinals against Serena, who likes to feed off her power.

Among the challengers, Angelique Kerber is striking the ball well, but suffers from teary breakdowns, perhaps making two weeks of mental toughness too much to ask. Poland’s Agnieszka Radwanska has had a rough summer, and her counterpuncher style might not be big enough to win in Queens. Former number one Ana Ivanovic, who has climbed back into the top 10 for the first time in years, is playing very solid tennis, but still has confidence problems in tight matches. And Canada’s Eugenie Bouchard has seemed scarred since Wimbledon, but wants to prove it wasn’t a fluke.

Tennis fans will want to keep an eye on the American players — it’s the U.S. Open, after all. But there isn’t a lot of good news on this front. Aside from Serena, who plays teenage up-and-comer Taylor Townsend in the first round, sister Venus is the next highest seed. Venus, now 34, is on a major upswing after a great summer during which she reached the finals of the Rogers Cup in Montreal, putting her at number 20 on the WTA tour. Sloane Stephens, who was poised to enter the top 10 this time last year, has since suffered a disappointing slump and been bumped from the top 20. Another teenager, Madison Keys, has a big game and can damage top players, but she can also struggle to find her range at important moments. At 27th in the world, Keys would face Kvitova in the third round, which could make for big bang tennis. Coco Vandeweghe, Christina McHale and Alison Riske — all in the top 50 — have also all had solid summers and are worth keeping an eye on.

There is significantly less optimism for American men. Top hope John Isner, the giant with the giant serve, enters the tournament after spraining his ankle last week in Winston-Salem, a tournament he was expected to win. As competitive as Isner is, if his serve goes awry, he doesn’t have a solid enough game to back it up. He enters the tournament ranked 15 and seeded 13, with a likely exit against Djokovic in the round of 16.

After Isner, the U.S. barely has another player in the top 50, with Donald Young, who is rebuilding his game with solid recent results, at 47. Steve Johnson, world number 51, has posted solid results of late, too. Jack Sock, who has had very questionable performances in recent years, appears to have turned over a new leaf this summer, resulting in winning the Wimbledon doubles championships with Canadian Vasek Pospisil. And Sam Querrey, who has been ranked as high as 17 in the world (now 57), has struggled with injuries and self-confidence, but had a good showing last week in Winston-Salem, reaching the semifinals before losing to Poland’s Jerzy Janowicz. 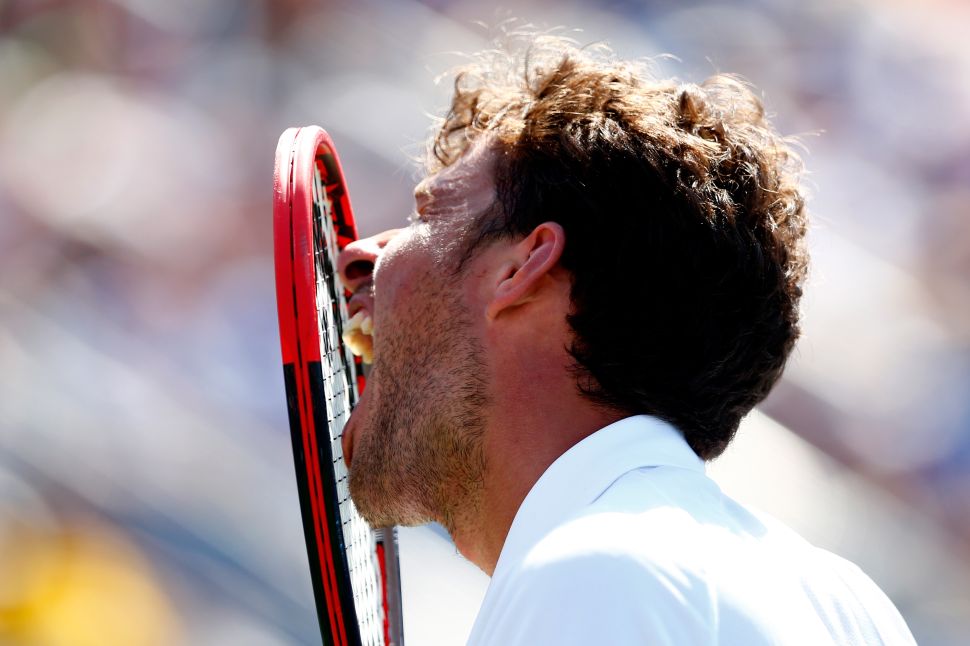