Mayor Bill de Blasio and the City Council announced today a $12.7 million expansion of a program that uses former gang members to curb gun violence, which continues to be on the rise citywide.

The new initiative will expand a pilot program from five precincts to 14 around the city to create a “Gun Violence Crisis Management System,” bringing together a slew of city agencies—from the NYPD to the Department of Education to the Department of Health—in what the mayor, City Council members and advocates promised would be well-rounded, inclusive approach to gun violence.

The “cure violence” model—which Mr. de Blasio said has been effective in the city’s pilot programs and in other cities—uses ex-gang members as “violence interrupters” who intervene in neighborhood disputes before they escalate to gun violence. Those “interrupters” will then refer people involved in the feuds to outreach workers who can help them with case management and supportive services.

The $12.7 million in funding will be split between the mayor’s office and the City Council, and builds on $3 million already baselined into the city budget to continue the work begun by the council’s Task Force to Combat Gun Violence.

“For any public policy or for any effort to be successful, to be effective, it needs to be inclusive—and that means that government itself cannot solve a problem. We all have a responsibility as community members to be involved and be engaged,” Speaker Melissa Mark-Viverito said.

The idea, Ms. Charles said, is to approach the problem like any other public health epidemic: “Quarantine an area and then saturating the area with some sort of antibodies to eradicate the violence.”

It’s just the latest policy Mr. de Blasio has rolled out in an effort to reduce gun violence in the city — including keeping NYCHA community centers open later and flooding housing patrols with cops taken off desk duty.

But Mr. de Blasio said he believed his approach to gun violence was working.

“We’re about 3.5 percent down in crime overall compared to last year at this time. We’re down 23 murders today compared to last year at this time,” Mr. de Blasio told the Observer. “Those are good indicators. We are concerned about the shootings numbers, but we’ve seen some real movement in these last few weeks as we’ve flooded the zone, as we’ve gotten more officers to the precincts in greatest need.”

In addition to the jump in shootings for the week ending August 3, CompStat also shows a longer trend of a 27.5 percent increase in shooting incidents for the most recent 28-day period measured. But the mayor said he is seeing success in the precincts and NYCHA developments targeted with new programs. 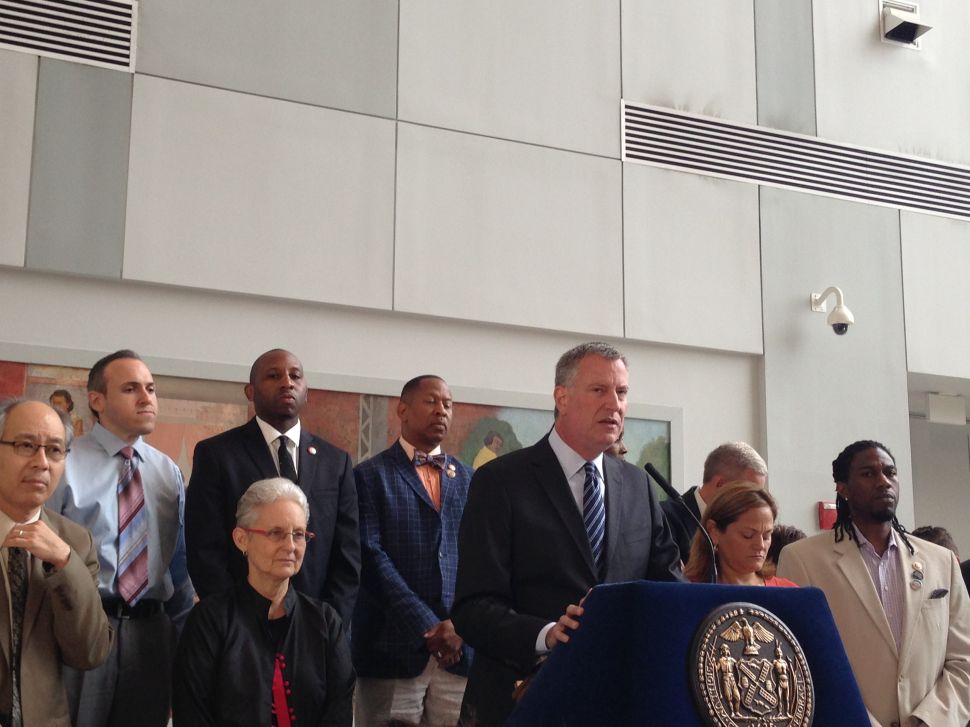