I appreciate your response to my column in which I called you out on your fraudulent and monstrous allegation of an Israeli “genocide” against the Palestinians. In your response, you speak of the death of a Palestinian child named Ibrahim, whom I too mourn.

But while you lay the blame on Israel, Ibrahim is a clear victim of Hamas’ campaign of ‘child sacrifice’ – as Elie Wiesel termed it – in Gaza. You cite Immanuel Kant. Surely you’re familiar with Kant’s definition of immorality, where human beings are treated as a means rather than an end. By that definition, Hamas is the ultimate immoral organization. Hamas wants Ibrahim dead. Their leaders call upon children to offer their “shoulders and chests” as martyrs. Dead Palestinian children serve no purpose other than a propaganda victory against Israel.

Israel is a just and righteous democracy that affords more rights and freedoms to its Arab citizens than any country in the Middle East. In Israel, Arab women are protected under the law from honor killings, a practice that is common under Hamas and, sadly, throughout the Arab world. In Israel, gay Arabs are protected from murder under false allegations of collaboration. In Israel, Arab-Israeli youth are afforded health care, top-tier education, and a promising future. My daughter and son are both students at Hebrew University in Jerusalem and they, as well as any other student, can attest to the vast numbers of Arab students gaining advanced degrees at Israel’s universities.

Compare that to the vile future offered by Hamas to Palestinian children which consists, in essence, of choosing between being a suicide bomber or a human shield. I am amazed that you, Naomi, a Western Jewish woman with liberal values could somehow defend the monsters of Hamas who have made it a crime for married couples to even hold hands on the beaches of Gaza. I am amazed that in this third war between Israel, a liberal democracy, and Hamas, a fiendish totalitarian terrorist theocracy, you would find yourself defending the terrorists of Hamas and indicting the righteous democracy that is Israel.

You say that your accusation against Israel of genocide against the Palestinians is nothing more than parsing words. Sorry. I won’t let you get away with that. Respectfully, it is a lie and a blood libel. Millions of Jews have been murdered over the past two thousand years because of false allegations of mass murder, like poisoning the wells of Europe or drinking the blood of Christian children.

I see you have never read the Hamas charter, a true call for genocide against the Jews with its repeated calls for the annihilation of Israel and its call for a time when even trees will ask Muslims to kill Jews hiding behind them. Find me one Israeli leader that would even dare speak that way of the Palestinians?

I shudder, Noami, to think about what you would have said about Winston Churchill during the Second World War. His response to the rockets being fired at London was the total destruction of German cities like Dresden and Hamburg, flattened utterly, something Israel has never even contemplated. I shudder to think what you would think of Franklin Roosevelt who ordered the pulverizing of Berlin and Tokyo and its civilian residents, let alone Harry Truman who dropped atomic bombs on Hiroshima and Nagasaki.

Here I offer you a simple challenge. Since the actions of Churchill, Roosevelt, and Truman were infinitely more deadly in vastly greater numbers than Israel’s pre-warning of civilians via leaflets, phone calls, and other alarms, then at the very least, Naomi, be consistent. Say definitively that in the Second World War the United States was a genocidal power, seeking the extermination of the German and Japanese people. Say definitively that the aggressor was not Hitler but the Americans and the party guilty of genocide was not Hitler but Roosevelt. If you do so, I will at least know that there is a consistency to your thought and I will applaud you as the victor in this exchange.

I suspect, however, that you would never say such a ridiculous thing. In the Second World War it was Hitler and Germany who were genocidal and the United States which saved freedom and liberty, even though, sadly and tragically, hundreds of thousands of German civilians died.

But unlike the allies of the Second World War, Israel does not target civilians. The deaths of children in Gaza which we all lament must be placed firmly at the feet of Hamas who use these children as human shields.

I’m amazed at your efforts to allegorize Israel and the promised land as an idea rather than a place. Do you not live in a home in New York which you lock at night, Naomi, so your children can be raised in safety? Well, Israel is the same. All the Jews seek is a tiny sliver of land – one sixtieth the size of all Arab countries – to lay their heads down in safety at night.

It’s a shame that Hamas does not seek the same for the Palestinians. Hamas could easily have used the largest per capita aid any organization has ever received – four times the Marshall Plan – to build homes, schools, hospitals, and Universities for the Palestinians residents of Gaza. But you saw what they did with even their concrete, Naomi. They abused all the building materials they received by constructing tunnels to kill Jews.

Their hatred of Israel is far stronger than their love of Ibrahim. 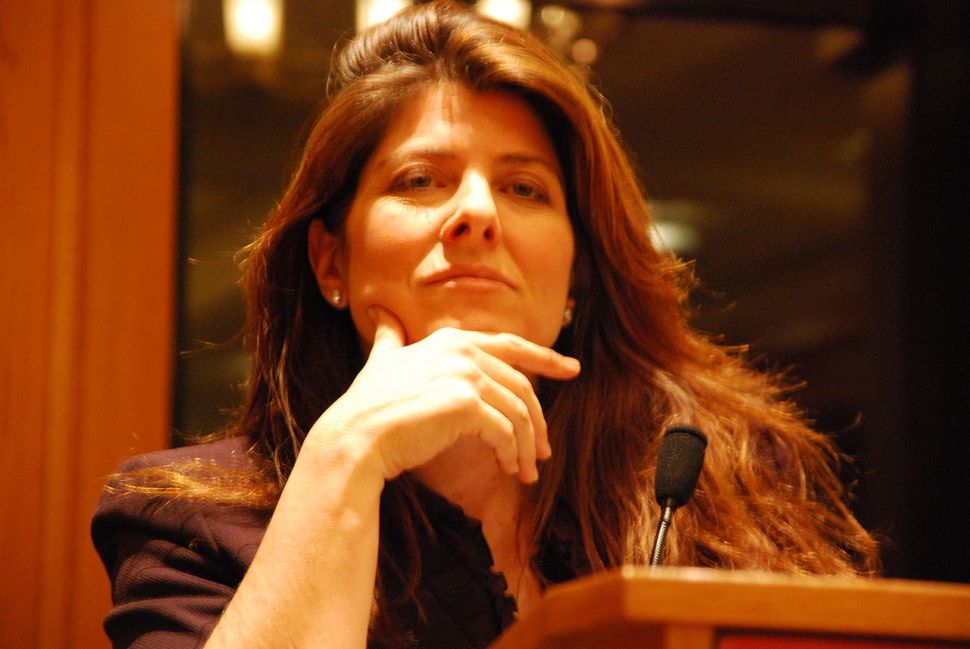