A 9/11 truth group named Architects & Engineers for 9/11 Truth is advertising in Times Square this week, insensitively timed to coincide with the 13th anniversary of the tragedy.

The group bought billboard space at the corner of 42nd St. and 8th Ave. where they’re displaying a 15-second video showing the collapse of 7 World Trade Center. Architects & Engineers paid a pretty penny for the prime advertising space—Ad Age reports that the cost to rent a billboard in Times Square can top $175,000 a month. CBS manages the outdoor ad space where the video is running on repeat, sandwiched between a Desigual ad and a Broadway preview—CBS couldn’t be reached for comment.

The billboard is part of the ReThink911 campaign, which wants to spin the narrative of Building 7, a 47-story complex that caved in at 5:20 p.m. on September 11, 2001. The skyscraper housed several government agencies, including the Emergency Operations Center (“Giuliani’s Bunker”). It was not hit by an airplane and had minimal damage compared to Buildings 3-6.

“Remember Building 7,” an organization working with Architects & Engineers, believes a controlled demolition involving fire or explosives caused the building to collapse. The group supports the High-Rise Safety Initiative, a measure on this year’s Election Day ballot that would require the Department of Buildings to investigate high-rise building collapses, particularly that of Building 7.

The assorted 9/11 truth groups have a whole schedule of events planned to take advantage of this time of mourning, including a protest at the World Trade Center site.

This afternoon at 2:00, Architects & Engineers screened the documentary Anatomy of a Great Deception, in which director David Hooper details how his obsession with 9/11 ruined his marriage—he made this movie and got his wife back. Touching.

The next event is tonight’s premiere of This Is Not About 9/11, a play by a woman whose father died on 9/11. It recounts her story of the day as told to the staff at the Freedom Tower (Ms. Van Auken’s mother Lorie was featured in the Observer as a widow who was disgusted that President Bush was “listening to second graders while my husband was burning.”)

The main event is Saturday’s symposium, “9/11 Awakening Goes Mainstream.” Speakers include Wayne Madsen, a former NSA officer delusionally convinced that 9/11 was an inside-job by the military, and Dr. William Pepper, who believes a “government conspiracy” took the lives of Martin Luther King Jr. and James Earl Ray.

The cherry on the truther cake for the weekend is their petition to Congress “to uncover the full truth of events surrounding 9/11/01.” Any member of the public who wants to sign the petition must provide a “Relevant Biography” and a “Statement About 9/11 Skyscraper Destruction.” Their hope is to inspire a thorough audit of the true events of the day. Oh, you know, like this one.

The group also edits all posts for “spelling, grammar, and relevance to topic.” Who would’ve thought billboard-buying conspiracy theorists were such thorough copy editors? 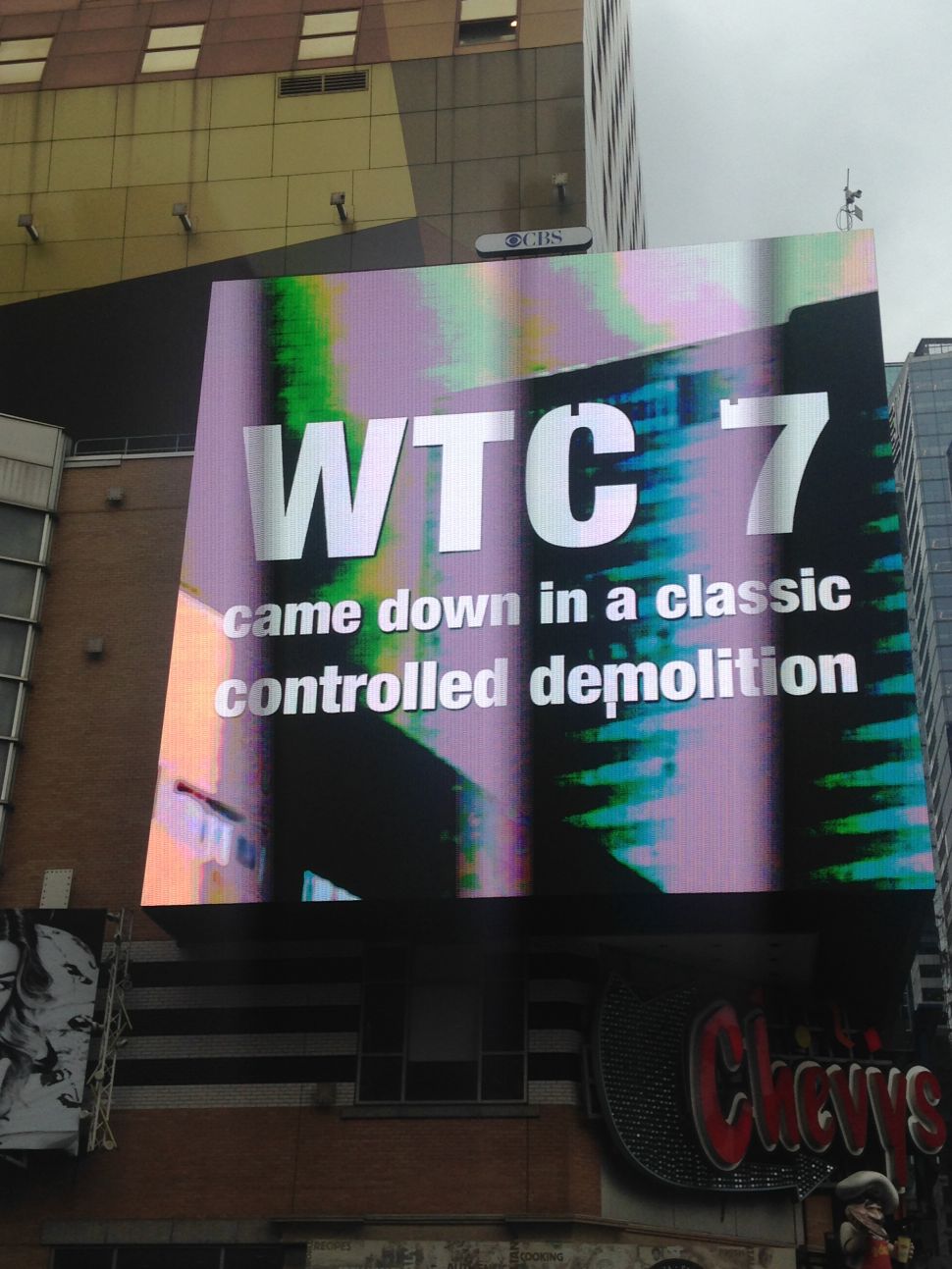