With the penalizing of Husain Abdullah of the Kansas City Chiefs for a gesture of Muslim prayer after picking off Tom Brady and scoring a touchdown, the NFL has reached a level of schizophrenia that is truly troubling.

Here is a league being universally condemned for its soft approach to domestic violence and the Ray Rice incident. Here is a league besot by scandal over the Adrian Peterson corporal punishment episode. And here is a league engulfed in controversy over Commissioner Roger Goodell’s response to both.

You’d think that a league which is being accused of looking the other way in order to generate bucket loads of cash would appreciate the morality of players who believe in God, lead religious lives, and offer harmless gestures of faith in a game.

You’d think that a league being accused of amorality would treat religious players like Husain Abdullah as a godsend and celebrate rather than penalizing them.

I have loved football since I was a boy. Growing up with my father thousands of miles away, I actually took myself to Miami Dolphin games on a bus most Sundays during the season from the age of perhaps twelve.

I love the game but I also love the celebrations of faith, which seem unique to the NFL, or at least most pronounced. The beautiful prayer circles that one sees after NFL games where players of opposing teams who moments ago were crushing each other’s bones now kneel together in prayer. Tony Dungy of the Indianapolis Colts winning the Super Bowl and immediately ascribing the glory to God. Tim Tebow wearing his religious convictions on his sleeve and coining a new phrase in his humility before God.

And for those of us who found Tebowing to be inspirational, how dare we employ a double standard and not salute the demonstration of faith by Husain Abdullah?

We in the West who continually reach out to our Muslim brothers and sisters asking them to ensure that extremists not take over their religion should be cheering and applauding special men like Abdullah who are a phenomenal credit to their faith and inspire Americans to give gratitude to God.

What was the officiating team on Monday night thinking when they penalized an absolutely innocent demonstration of worship?

For those who believe that God has no place in the NFL, I ask them, Really? So the only thing that should be allowed are truly dignified displays like women jumping up and down in lycra with pompoms and cleavage, and bare-chested, pot-bellied men with their teams written across their stomachs? Wearing a cheese hat is OK but not a yarmulke?

America is a religious country and sincerely so. Ninety-two percent of the population believes in God, who is even on our money. But for all that, America also loves compartmentalizing religion. Keep it in the Church, not in the schools. Put God in political campaigns but not in the popular culture. Aside from those who pay for their air time like Joel Osteen, notice that you rarely ever see religion on TV.

What players like Husain Abdullah are guilty of, and what gets under people’s skin, is breaching the line that separates the secular from the religious, the holy from the profane, the sacred from the everyday. God is a serious subject. People want Him in their lives and will turn to Him at the appropriate time.

But not in their recreation. We just want to have a good time.

We want to see bone-crunching tackles, running backs diving into the end zone. Not people on their knees in prayer.

But people like me admire Abdullah precisely because we don’t believe in these artificial lines. We believe in live and let live.

Believers ought not ever impose our faiths on anyone else. But we won’t accept having it knocked out of us either. We’re not fanatics. We don’t argue that it’s our way or the highway. We’re not going to make you pray.  But less so are we willing to allow you to forbid us to practice our faith.

Who does it bother?

Public schools should never have mandatory prayer. But as the Lubavitcher Rebbe argued they should have a moment of silence during which pupils can choose to reflect on something higher if they so choose. God should not be mandated at school but He need not be chased out either.

Religion should obviously not be enforced in public schools, but parents should get vouchers to send their children to religious schools if they so choose. It’s their tax money after all.

So hack away at that artificial line, Husain. Pray away on the gridiron. Keep on being you. You’re my Muslim brother. And I greatly respect your love of your faith. 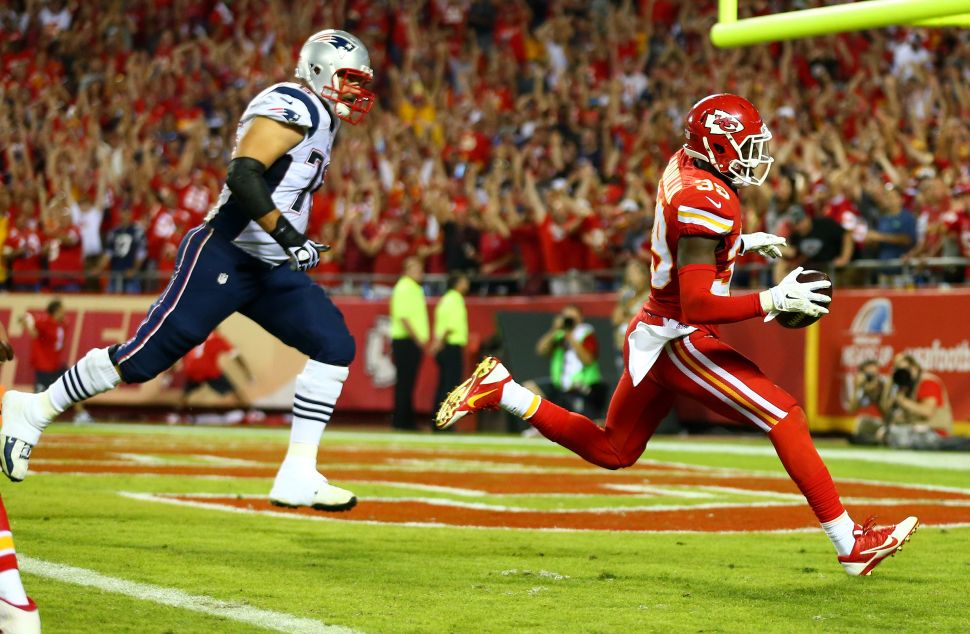