What a difference a summer makes.

Police Commissioner Bill Bratton told members of the City Council today he planned to ask for more than 1,000 additional police officers in the NYPD’s headcount — just months after turning down the City Council’s proposal to add 1,000 more cops.

“I reported to you that we were in the process of re-engineering the organization, and we would be looking very carefully at what should the size of NYPD be, going forward, was it 1,000, 2,000?” Mr. Bratton said during a Council hearing. “We are in the process of closing in on those numbers, that it will be in excess of 1,000 additional officers we will be looking for.”

Mr. Bratton told reporters that those new figures come after eight months of reviewing the department’s organizational structure and determining “an actual headcount that’s based on analysis.”

Mr. Bratton made the news nearly two hours into a hearing on new training that will be given to officers about de-escalating conflict and appropriately using force in the wake of Eric Garner’s death in police custody.

“How many cops do we actually need, I can be very comfortable in saying to you we need more, that’s quite clear,” Mr. Bratton told reporters after the hearing, noting significant overtime was needed to handle crime over the summer.

That’s quite a different tone than the one Mr. Bratton took during this year’s budget process, when the City Council’s response to the mayor’s budget included funding for 1,000 more police officers. Mayor Bill de Blasio and Mr. Bratton opposed the plan, with the police commissioner saying all police leaders want more cops, but that the money just wasn’t there for it and that he’d prefer raises for his officers first.

“It sounds great, but the reality is those officers, the first ones would not hit the streets until July of 2015. That will do nothing to alleviate the issues that are being discussed here in May of 2014,” Mr. Bratton told the City Council in May about new police officers. “The use of overtime, which is in the budget, is for our purposes at this time the better way to go.”

Today, Mr. Bratton said the new training he was discussing is part of why he’d need more officers, along with other new programs like the roll-out of wearable cameras for police officers. The training alone, Mr. Bratton said, which will cost around $25 million, would require many hours of overtime to fill the shifts of hundreds of officers a day as they pulled out of precincts and sent to the academy for three days.

“They are so short-staffed now, they can’t absorb losing this police officers without some negative impact on the policing in those precincts,” Mr. Bratton said.

It’s not the first time Mr. Bratton has changed his opinion on the size of the NYPD — before becoming commissioner, he said the force had grown too small, with 6,000 fewer cops in the department than there were during September 11.

The back-and-forth didn’t go unnoticed by Councilman Vincent Ignizio, the minority leader and one of the loudest voices calling for the 1,000 new cops in the city budget.

“I was happy to hear that Commissioner Bratton is as he previously was, and then wasn’t — supportive of the need for additional manpower in the NYPD,” Mr. Ignizio told the Observer.  “With the rate of attrition and desire of the de Blasio administration to roll out new training and community policing programs, I feel this realization was only a matter of time.  Should we have all agreed on this fact months ago, we would be ahead of the game. That being said, I am very supportive of the head count increase as my colleagues in the Council have been for a long time.”

Council Speaker Melissa Mark-Viverito was also supportive of the 1,000 additional police, but when pressed by the Observer wouldn’t say whether she felt Mr. Bratton’s comments today contradicted those he had made in the past.

“We welcome, again, the recognition that the Council plays a role here, and we want to work in partnership to provide the NYPD with the necessary resources. Many of us continue to believe that more personnel is necessary and there was an acknowledgment of that today,” Ms. Mark-Viverito said.

The mayor’s office said Mr. de Blasio — who previously said he thought the NYPD headcount was where it needed to be — would “review staffing” at the department.

“Keeping New York City the safest big city in the country is a core priority for Mayor de Blasio, and this Administration already began in last year’s budget the work of increasing NYPD force levels through civilianization.  The mayor and his team will review staffing and expenditure proposals received from every commissioner and department when the regular budget process begins next year,” spokesman Phil Walzak said. 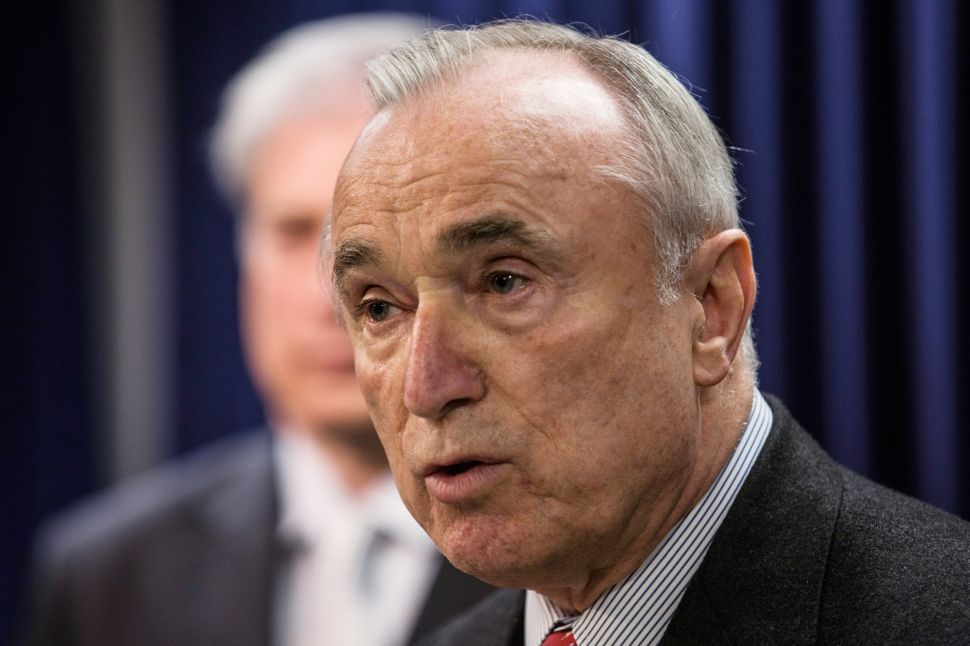