Eighty minutes with no intermission is my kind of play, but Almost Home, a slight but well-written, one-act play by Walter Anderson produced by the Directors Company at the Acorn Theatre, has other things going for it, too. Not the least of which is the return of Jonny Orsini, the terrific award-winning young actor who dazzled audiences and critics alike last year as Nathan Lane’s sensitive, human and heartbreaking lover in Douglas Carter Beane’s wonderful, underrated The Nance. This time he plays Johnny Barnett, a soldier who returns to his parents’ drab, depressing flat in the Bronx after a tour of duty in Vietnam. The year is 1965, and all he wants to do is pick up the pieces of his life and start anew by going to college. The obstacles are daunting.

Almost Home is almost a blueprint of Frank Gilroy’s Pulitzer Prize-winning drama The Subject Was Roses, on a smaller scale minus the pathos, but not without merits of its own. Pampered by his over-protective mother Grace (a fine Karen Ziemba, in a refreshing change of pace from her customary singing and dancing roles in musicals) and a neighboring mentor who used to be his favorite teacher (Brenda Pressley), Johnny has a promising future. But his biggest problem is his abusive father Harry (Joe Lisi), a disillusioned phone company lineman with an addiction to booze and the racetrack. The fifth cast member is a crooked cop from the local precinct (James McCaffrey) who once stuck his neck out to get Harry out of a jam and now, seven years later, strong-arms Harry to force his son to join the police force in exchange for erasing his gambling debts. Poor Johnny has the unpleasant task of bringing his parents together, but eventually finds himself drawn into their shouting matches. The play centers on Johnny’s moral dilemma—make his father happy and keep him out of jail, or break the law himself with a profit from American dollars he sold on the black market in Nam?

Almost Home comes close to mimicking the strained family relationships in The Subject Was Roses, but lacks the same dramatic thrust and theatrical energy. Michael Parva’s direction makes effective use of the small Acorn stage, and the play is uniformly cast. Almost Home may not have the desired lasting value one might hope for, but in a digital age of soulless gimmickry when most plays are about technology and rock and roll, it’s nice to see a naturalistic play about people with real feelings, saying real things to each other.

Neil LaBute is the official king of misogyny. In harrowing plays such as Fat Pig and reasons to be pretty, and movies like In the Company of Men, women rise from the ashes as emotional wreckage—black, blue and scarred all over. In his new one, The Money Shot, the tables turn. Now its one man who is reduced to emasculated rubble by three women, and at the critic’s preview I attended, the bittersweet taste of revenge had women smiling all the way to the exit doors.

The Money Shot is set in a lavish glass penthouse in the Hollywood Hills overlooking the lights and traffic of a plastic city below. The house, which seems as unlived in by real people as a movie set, belongs to Karen (Elizabeth Reaser), a beautiful movie star whose career has taken a downward spiral since she came out to the press as a lesbian, and her tough, sarcastic girlfriend Bev (Callie Thorne), a film editor. For cocktails and a dinner that never arrives, they have invited Steve (Fred Weller), an obnoxious, preening and intellectually challenged action-hero hunk, and his equally sexy wife Missy (Gia Crovatin), a blonde bimbo wannabe actress with no discernible talent whose greatest role was in a musical version of The Crucible until Arthur Miller sued the production and she had to turn in her pilgrim witchcraft costume.

Karen and Steve are having trouble with the crucial love scene in their new movie, in which the director has asked them to act in the nude while having real onscreen sex. They hope the cynical, superior Bev and the eternally starving Missy with a brain the size of a pecan can make up a list of acceptable things they can and cannot do without trashing their reputations. Like how far will they go? Or will they get to the “money shot”? (The title refers to the porno industry’s term for the final sexual climax the audience pays money to see). In Neil LaBute plays, people talk incessantly, the way, in Neil Simon plays, the telephone rings continually. So The Money Shot is a talkathon—and not always because the subjects are particularly meaningful, either. You just have to sit back and marvel at the surfeit of dialogue, some of it borderline hilarious.

The doofus Steve is an actor with a lot of opinions and not much sense. Nearing 50 but indignant when anyone mentions it, he’s had his eyes done and wears sunscreen indoors. Karen is an actress who owns a restaurant in Malibu because in La-La-Land everyone thinks ahead to protect tanking careers in which each day poses the potential threat that Jennifer Aniston might make it their last. The play is about how famous people deal with celebrity fueled by fear, insecurity and the perils of career maintenance. It culminates in a vigorous wrestling match between Bev and Steve in which the woman pulverizes the man because she’s all muscle and he is less masculine than he thinks he is, which demolishes his considerable ego. Her prize: she gets to take his wife to bed. It’s a spoof of the New Hollywood in an era of superficiality and artifice. Even the hors d’ouevres look like fried Styrofoam.

Directed with finesse by Terry Kinney, a keen actor himself (unforgettable in the Oz series on HBO), the four performers are peerless, but I took special delight in the antics of Mr. Weller. Tall and skinny as a scarecrow, with a unique way of pouncing on vowels, he’s a good and versatile actor, but an even better comedian. In The Money Shot, everything he knows comes from Wikipedia, and he’s especially funny when he tries to pronounce words in a variety of idiotic syntaxes while you wonder how many ways he can get the same thing wrong. He made me laugh, even when the play didn’t. 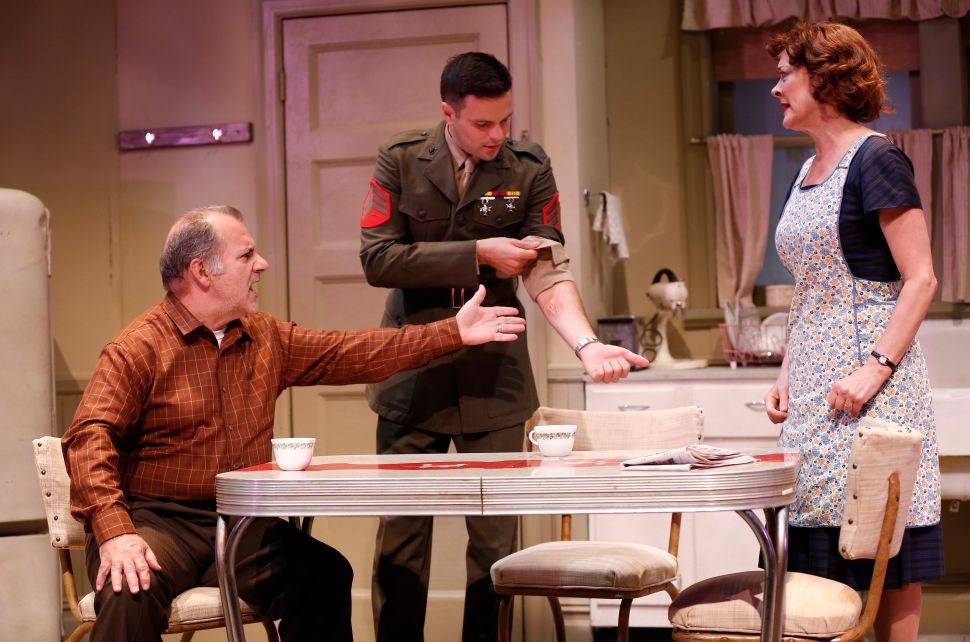