By law, operators can license no more than two outdoor newsstands. Originally the law was passed so that disabled veterans and handicapped people could own newsstands, and the law presumed they could only balance owning two at a time. Because of that limitation, owners can only reap a limited profit and can’t grow or expand.

Now these businesses have morphed into an “excellent first-time entrepreneurial opportunity for a different group of have-nots: new immigrants from India and Pakistan,” notes Mr. Bookman. Names of owners from a list of Department of Consumer Affairs’ newsstand operators demonstrate his point: Chodhury, Das, Shah, Youssef, Patel, and Syed.

These newsstands are stand-alone and distinct from those located in the subway and hotel lobbies, which are administered by the New York City Parks Department.

What keeps many alive are lottery sales, which generate 6 cents on every dollar sold. Many owners can make $20,000 to $30,000 a year on percentages drawn from lottery sales, Mr. Bookman suggests.

But magazine sales have dried up. Most glossies cost $3 or more, but “you can get it sent home [by subscription] for 35 cents. Even Playboy and Penthouse sales are gone,” laments Mr. Bookman.

To survive, newsstands are turning into another relic, one that disappeared decades ago: the candy store. Most newsstands have refrigerators and generate revenue by selling , soda, candy and batteries. With over 55 million tourists flocking to New York City in 2013, sales of such goods can be brisk.

One such newsstand sits downtown, near the stock exchange. Its owner, who has run the business for thirty-plus years, says speaking his mind could get him in trouble.

He doesn’t sell lottery tickets, because the area predominantly attracts tourists. Nearby newsstands don’t hurt his business. “My biggest competitor is Duane Reade,” he says. Also, while visitors to New York boost sales, they also impose. Some owners spend a huge chunk of their day giving directions, for which they can’t of course charge.

Another owner says her business operates “like a general store. We sell a little bit of everything except shoelaces. But we still turn a profit.”

Another mainstay of the business has also been obliterated: tobacco revenue. When taxes inflated the cost of a pack of cigarettes to $14, “cigarette sales dropped by 50%,” Mr. Bookman asserts. And a further complication involves Cemusa, the Spain-based company that builds and maintains all the city’s newsstands and bus shelters. It earned that contract with the city Department of Consumer Affairs in 2006 and splits advertising revenue that is emblazed on the newsstands with the city, while vendors get zilch.

Nigel Emery, vice president of marketing and business development at Cemusa, says it “pays a fee to operate these bus shelters and newsstands. We make money on the sales of advertising. Operators make their money from sales of goods.” Advertising revenue defrays the cost of assembling and maintaining these newsstand shacks.

Cemusa inspects and cleans the newsstands twice a week “to make sure they work, see if there’s a problem with the grill, ensure that the advertising is clean, and fix any damage,” Mr. Emery explains.

Newsstands also require capital investment. Vendors must pay the city $600 for a license, which if accepted, must be followed by $30,000 to have a new shack constructed.

Anecdotal evidence reveals that most owners hire employees to run newsstands. This reporter visited no fewer than 10 newsstands across the city and found eight manned by employees, not owners.

Looking into the future, Mr. Bookman envisions that the remaining 309 newsstands will fade. “Unless they change the law to allow multiple ownerships or allow them to combine with a coffee cart, they will dwindle,” he says. He expects only high-traffic locations near Times Square and Grand Central to survive. 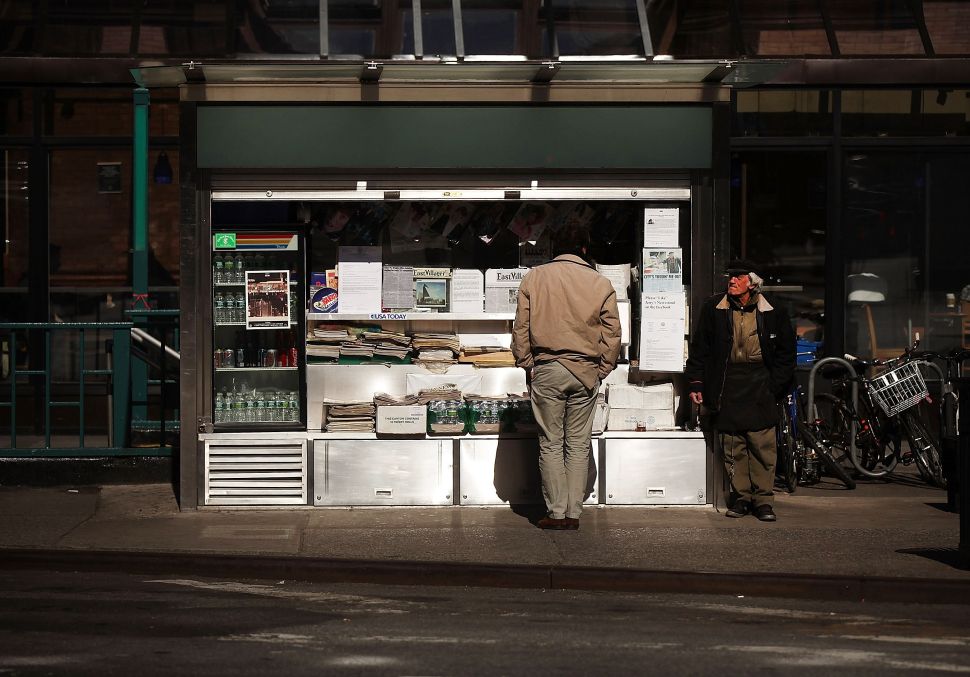