The offices of Tinker Tailor were chaotic. Well over a dozen employees bustled away in a space roughly the size of a New York studio apartment. Every spare inch of space was stuffed with clothing racks, even the tiny conference room. Meeting with CEO Aslaug Magnusdottir in there felt like squeezing into a cupboard, but the style doyenne stayed calm despite madness seemingly breaking out all around.

Ms Magnúsdóttir clearly enjoyed the opportunity to chat about her growing company at leisure, speaking slowly and laughing often. The former founder and CEO of Moda Operandi has nothing but certainty that customization is the next big thing in fashion and that she’s got another hit on her hands.

Ms. Magnúsdóttir grew up far from the glitz and glamour of the New York fashion industry. Although she now lives in the garment district with her second husband Gabriel Levy and spent her earliest years in Los Angeles, most of her upbringing was in Iceland—long before Iceland was a fashionable destination.  “There were no tourists. Beer was illegal. There was only government television and no television on Thursdays or in the summer. The big industry was fishing…” said Ms. Magnúsdóttir, rattling off the many ways in which Iceland was utterly unglamorous. Her only exposure to fashion was from her mother’s magazines and her favorite childhood book—Princess Penelope’s 365 Dresses.

But her ability to multitask was evident from early on. While attending law school, Ms. Magnúsdóttir simultaneously ran a modeling agency and served as chairman of the National Ballet Company of Iceland. But she soon wanted more international exposure and took off for a law program at Duke University followed by an MBA at Harvard Business School.

Coming out of Harvard in 2000, Ms. Magnúsdóttir was on the verge of launching an Internet start-up, business plan in hand, before fortuitously deciding it didn’t feel quite right. She took a job as a consultant with McKinsey & Company in London right before the Internet bubble burst, followed by a role investing in retail companies for Baugur Group. She finally returned to the U.S. in 2006 and landed a plum gig with former Bloomingdale’s CEO Marvin Traub, launching fashion-focused private equity firm TSM Capital.

Suddenly Ms. Magnúsdóttir was thrown right into the very same New York fashion world that she couldn’t have imagined as a child. “On my first day on the job we met with Harvey Weinstein and the Hilco guys about buying Halston so it was a very interesting start. Later that day I met with Edward and Georgina Chapman,” Ms. Magnúsdóttir recalled, noting that Marchesa collaborates with Tinker Tailor. It was this period when she forged deep ties with all of the industry’s movers and shakers. “Marvin was known for being the ultimate networker. He would do as many as three breakfasts with people in the industry then one or two lunches every day and he would bring me with him.”

She took those relationships with her to her next roles as president of House of Waris Fine Jewelry then heading up merchandising for Gilt Noir. In her role at Gilt, designers frequently shared their frustrations with her that stores were only buying commercial pieces and their most special pieces weren’t making it to production. Ms. Magnúsdóttir knew exactly what they were talking about. She was struggling to purchase runway pieces she wanted for the same reason.

Thus the idea for Moda Operandi—which started as a place to pre-order runway pieces and thus ensure their production—was born. Ms. Magnúsdóttir called up Vogue contributing editor Lauren Santo Domingo and the rest is history. Moda Operandi was a monster success growing so large and so fast that they were able to co-sponsor fashion’s biggest night, the Metropolitan Museum of Art’s Costume Institute Gala, in 2014.

But shortly after the Met Gala, news broke that Ms. Magnúsdóttir would be leaving her role as CEO among rumors of a rift between its founders, according to The Daily Beast.

“I would just say strategic differences between the founders were really the key reason,” Ms. Magnúsdóttir said, confirming reports but noting that she still owns her stake in the business. “It was a difficult decision to leave at the time and it was hard.

It felt like a breakup. But in a way I feel blessed to go and build something new again because since then I’ve come to realize that is probably my biggest strength is conceptualizing and building in the early days.”

Ms. Magnúsdóttir took only a few weeks off before jumping into her newest venture, Tinker Tailor, a reaction to the demands of many of her A-list and fashion insider friends. “All these women had told me, ‘I love that runway piece but I can’t wear something so short.’ Or, ‘If it only had some sleeves, or if only it were in a different color or without that peplum.’”

Whatever the reason —body type, culture, taste, lifestyle—it just felt like there wasn’t enough power in the hand of the consumer.Tinker Tailor was launched to bridge the gap between designers and personal tailoring.

While at first blush this seems like a hassle many designers would not want to undertake, Ms. Magnúsdóttir told the Observer the concept was immediately embraced as a modern, scalable version of the old-school couture experience. To date, nearly 80 designers have signed on to the company’s books, ranging from emerging talents such as Ostwald Helgason and Betina Ocampo, to masters like Giambattista Valli and Vivienne Westwood.

“Each individual garment has its own customizations based on a collaboration between us and the designer. We say what we think our woman wants and they say, ‘This is what we think we can do with our production,’ ” Ms. Magnúsdóttir explains. Common modifications include sleeve style, hem length, material type and embellishments.

But the sleeper hit at Tinker Tailor may turn out to be the customizable pieces created by the Atelier team, under the director Vincenzo Vaccaro. A veteran of Christian Dior Couture, Oscar de la Renta and Chanel, he and his support team of seamstresses fashion well-constructed garments to order from the same materials and fabrics as houses such as Hermés and Lanvin, but for a fraction of the price. The team also has the benefit of feedback from the company’s elite Advisory Board that includes Man Repeller Leandra Medine, stylist Yasmin Sewell, fashion editors Melanie Ward and Laura Brown, and even Saudi businesswoman and royal Princess Reema Bint Bandar Al-Saud. Despite the six-week lag time between order and delivery—all garments are made to order in the company’s tiny atelier—Moda Operandi proved that customers are willing to wait for special pieces, and Ms. Magnúsdóttir is hoping to strike gold again with Tinker Tailor.

While the atelier continued churning out custom clothing, Ms. Magnúsdóttir was preparing for NYFW when we spoke. She talked through her wardrobe planning for the shows.

“A week before, I start pulling a lot of stuff, sometimes buying a few extra things and putting it all together before photographing the outfits in preparation.” Ms Magunsdottir favors feminine dresses, heels and statement jewelry. “It’s usually two outfits if there’s also an evening event. I choose my outfits based on the shows on a particular day. If there’s an edgier designer it might be a slightly edgier outfit. I don’t think it matters but still that’s how I think about it.”

NYFW SS 15 was to be the first fashion week for Ms. Magnúsdóttir since Tinker Tailor launched. The CEO, who particularly enjoys spotting emerging talents, said her approach was going to be slightly different than that of simply a buyer. She said, “It will be not so much about the garment as it is but on the garment as it could be.”

So don’t rule out that runway piece you’d love to buy “if only.” You may just get your wish. 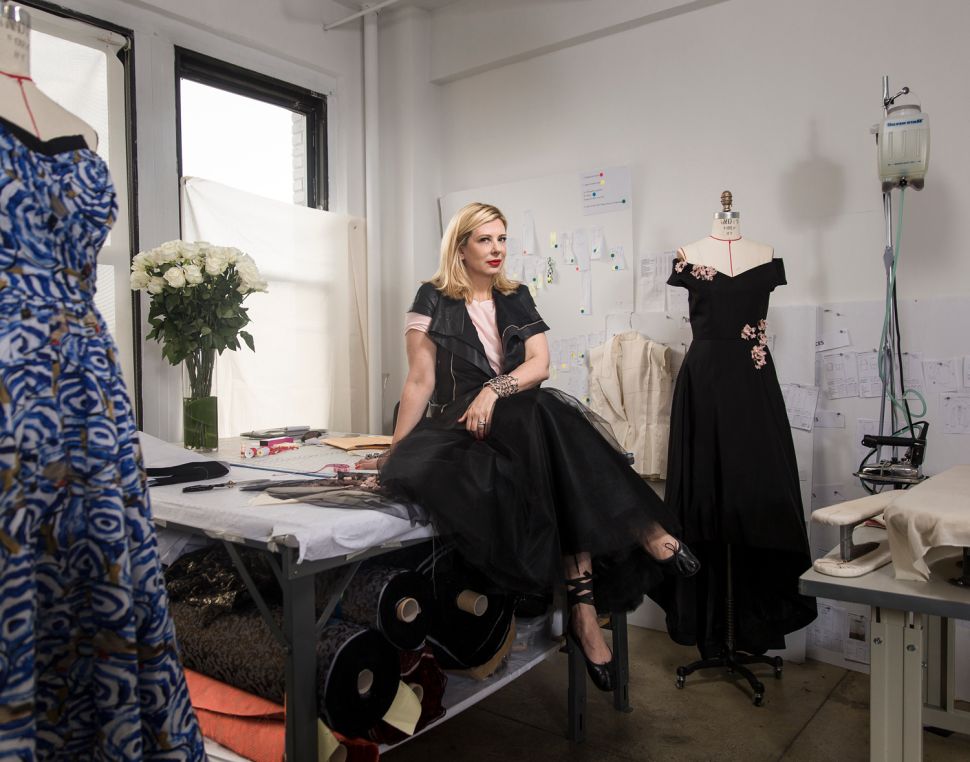