Bill Clinton’s recent comments regarding U.S. tax policy, urging reform — read reduction — of corporate taxes, and stating that “we have the highest overall corporate tax rates in the world; and we are now the only OECD country that also taxes overseas earnings on the difference between what the companies pay overseas and what they pay in America,” are not inconsistent with Clinton’s previous record and statements regarding the economy.

Despite raising the corporate tax rate to its current 35% percent during his presidency, Clinton has generally been a what used to be known as a Rockefeller Republican; and these economic views reflect that. They do, however, a contrast with the economic proposals for which President Obama is currently advocating.

This week has been one of the former President’s occasional bursts of significant media exposure. The combination of the Clinton Global Initiative annual meeting, the growing sense that Hillary Clinton has to make a decision one way or the other regarding her presidential campaign in 2016, and even the expected birth of the Clintons’ first grandchild any day, has kept Bill Clinton in the news in recent days.

During the last few months, in particular, both Bill and Hillary Clinton have been sharply critical of the president who Ms. Clinton hopes to succeed. This is somewhat to be expected, as the presumptive Democratic nominee for 2016 needs to separate herself from an unpopular, lame duck president. It is also difficult to listen to this and not sense some degree of pleasure from the Clintons as they level subtle, and sometimes not so subtle, critiques of the man who defeated Hillary Clinton in 2008. Not surprisingly, most of these criticisms are from the right, as Ms. Clinton seeks to protect herself against conservative attacks in the general election.

Bill Clinton speaking against President Obama’s economic proposals is a minor thing, but it is a reminder that if Ms. Clinton is a candidate, both Clintons will be in the spotlight, with every statement, comment and tweet they make being scrutinized. By then Bill Clinton will be 16 years removed from office, a full two decades away from his last election, and no longer the extraordinary politician some of us remember from the 1990s.

We saw in 2008 that Mr. Clinton, under the pressure of a campaign, can make mistakes or create problems for Ms. Clinton. These mistakes, however, would have to be enormous to impact a Democratic primary that is likely to be non-competitive and an easy win for Ms. Clinton. And we’ve also seen what a formidable campaigner President Clinton can be — even President Obama had to overcome his strong reluctance to ask a favor and haul out the “explainer in chief” when it looked like he needed Bill to overcome perceived gaps in 2012.

The more significant concerns about comments like Bill’s recent digs at Mr. Obama, and future statements President Clinton will undoubtedly make as the campaign heats up, are that they remind voters that despite Ms. Clinton’s now almost twenty years in public service after being First Lady, a Hillary Clinton presidency will always be, more than the Clintons themselves would probably like to admit, about Bill as well. In a general election, this could become an issue. Voters  by 2016 may not remember the Clinton years, or Bill Clinton himself, as fondly as they do now if they see too much of him during the campaign.

Younger voters who will gain a lot of exposure to Mr. Clinton for the first time over the next two years may form a different opinion of him altogether. As the 2008 primary season progressed, Mr. Clinton seemed increasingly like a great ballplayer who could no longer get around on the fastball. He recovered a lot of the magic in 2012 when his wife was no longer in the face. But If the “slow-bat” trajectory continues in 2016, it could create problems for Ms. Clinton during the general election campaign and even her presidency. Fans of the New York Yankees can probably relate to that this year, but Derek Jeter will play his last game on Sunday. As long as Hillary Clinton is in public life, Bill Clinton will not be able to exercise that option. 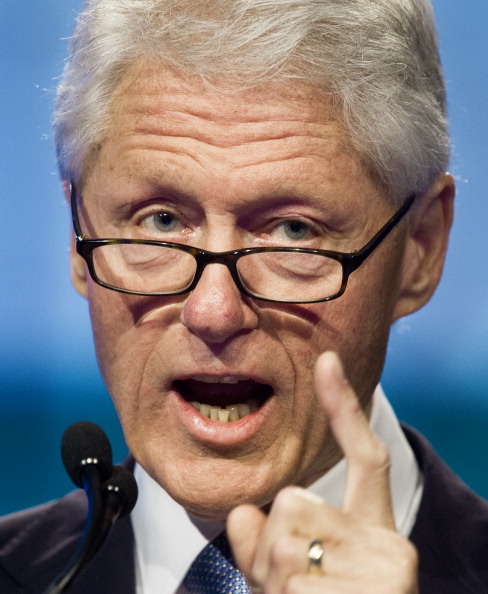