“I found out as all of you found out,” Mr. de Blasio said at an unrelated press conference in the Bronx. “I had no idea previously, and I would just refer questions to the Staten Island Zoo. They’re the experts.”

Mr. de Blasio’s deferral to the zoo came even as the question was about his own personal feelings after he learned that the Staten Island Zoo groundhog died a week after he dropped the furry mascot in February.

The death of the groundhog — who was actually a female named Charlotte, standing in as the iconic Charles G. Hogg a/k/a Chuck — was revealed in a triple-bylined New York Post story touted loudly as an “exclusive” and quoting “zoo sources.” The groundhog died a week after Mr. de Blasio dropped it it of injuries consistent with a fall, but zoo officials have since said they do not believe it was Mr. de Blasio’s well-documented drop that caused the injuries.

While the mayor didn’t have much to say, the rodenticide reveal has led some — including Councilman Vincent Ignizio, the minority leader who represents part of Staten Island — to say mayors should no longer hold the squirmy creature at the annual Groundhog Day event.

“The Ground Day Ceremony at the Staten Island Zoo is an extremely popular national event, and the professionals there do a great job with an animal that – as we have all seen – can be very difficult to handle. But for that reason, I think the handling of the groundhog may be best left to professionals,” Mr. Ignizio said last week.

A zoo spokesman told the Wall Street Journal those changes may be made for future Groundhog Day festivities. But today, Mr. de Blasio demurred on whether he plans to pick up Chuck — or any Chuck stand-ins — in the future.

“I’m gonna let the Staten Island Zoo determine what’s the right course of action,” Mr. de Blasio said. “I’m certainly open to any changes but we have to let them determine what makes sense.”

Mr. de Blasio is not the first mayor to have trouble with a Staten Island Zoo groundhog. Staten Island Chuck famously bit Mayor Michael Bloomberg in 2009. That encounter led to the use of the thick gloves Mr. de Blasio wore while dropping Chuck this year.

The mayor’s alleged role in the beloved groundhog’s death is unlikely to endear him to the people of Staten Island, who recently gave him a 25-percent approval rating in a Quinnipiac University Poll.

And as late-night comedian Steven Colbert recently pointed out, Staten Island is the only borough that Mr. de Blasio lost in the general election, falling to GOP challenger Joe Lhota — which Mr. Colbert implied was the motive for a marmot mob-hit.

Of course, it’s not the first-time a well-intentioned trip to the Forgotten Borough has been derailed for the mayor: The topic at hand during a business roundtable in Staten Island was all but forgotten when Mr. de Blasio used a fork to eat his pizza earlier this year. 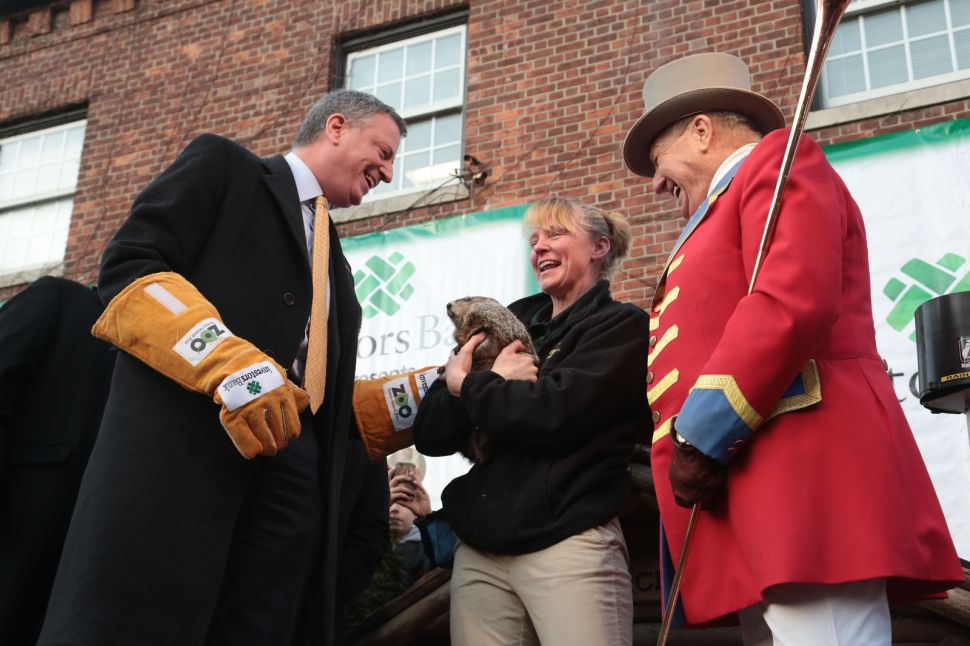