This time a year ago, many people didn’t think Mayor Bill de Blasio’s ambitious plan for universal pre-kindergarten was feasible.

Today, Mr. de Blasio took a five-borough victory lap to tout the first phase of his signature education proposal, which has doubled the number of full-day, free pre-K seats available in the city to 51,500 seats across public, private and charter schools and community-based organizations. By next year, the mayor aims to have a pre-K seat available for every appropriately aged child in the city.

“Sometimes in life, you have to say this is my number one priority, and we’re gonna move heaven and earth — and that’s what this team did. So it’s a joyous day,” Mr. de Blasio said.

The mayor’s first stop today on his victory lap today was a classroom in Brownsville, Brooklyn, where fresh paint coated the walls and fresh faces would fill tiny seats inside “Inner Force Tots,” one of the community-based organizations that will provide hundreds of new pre-K seats in the city.

The successes or failures of Mr. de Blasio’s universal pre-K program will be watched closely, but the mere fact that the first phase of the massive expansion has begun nine months into his tenure as mayor represents a significant victory for the mayor, who was happy to point out in retrospect the “air of incredulity” among reporters and others when he announced the plan.

Among those who didn’t believe it was possible was United Federation of Teachers President Michael Mulgrew, who backed Mr. de Blasio’s opponent Bill Thompson in the mayoral primary and knocked the UPK plan as a pipe dream. Today, the former skeptic stood next Mr. de Blasio and said he’d been converted.

“I remember a long time ago when I started teaching I would hear people give speeches on pre-K and we heard it over and over and over again for years and years and generations,” Mr. Mulgrew told the Observer. “And as a teacher, I knew that it would make a difference, but I was constantly feeling frustrated.”

That frustration, he said, stemmed from elected officials constantly talking up pre-K, and never accomplishing it — but said Mr. de Blasio and his wife, Chirlane McCray, were different.

“The mayor and Chirlane were very clear when, after the election, they said: ‘We’re doing this. This not a political issue. This is an issue we believe in. We will accept this challenge, we’re going to go out there, we’re going to put a team together, and we’re going to get it done,'” Mr. Mulgrew said.

Of course, Mr. de Blasio’s march to expand universal pre-K was not without its pitfalls. He had made an income tax on the wealthiest New Yorkers a key part of the proposal, only to see it shot down in Albany. For weeks he argued that the tax was the only safe way to fund the program, before eventually accepting state funding for it. Mr. de Blasio no longer mentions the tax in discussing the campaign for pre-K.

“We could not be more pleased with the result. We said from the beginning we had to get to this day. I never had any illusion it would be exactly the way we planned it. All I cared about is that we got there,” Mr. de Blasio told the Observer.

Mr. de Blasio sought to make the pre-K expansion personal, inviting his wife to speak at the podium after elected officials and recounting dropping his son, Dante, off at his first day of his senior year at Brooklyn Tech this morning, on his seventeenth birthday. He also recounted his own children’s pre-K education.

“Those were magical days. Those were transcendent days for our family,” he said.

Ms. McCray said next year there will be “a tiny little seat” for every New York three-year-old in a pre-K classroom, but that those seats would be “a very big deal.”

“I urge every New Yorker, young and old to step back and savor the moment,” an emotional Ms. McCray said.


Mr. de Blasio made later stops at a pre-K classroom in a Staten Island Catholic school, where he was joined by Cardinal Timothy Dolan, and will later make remarks at a charter school in Manhattan hosting universal pre-K programs. 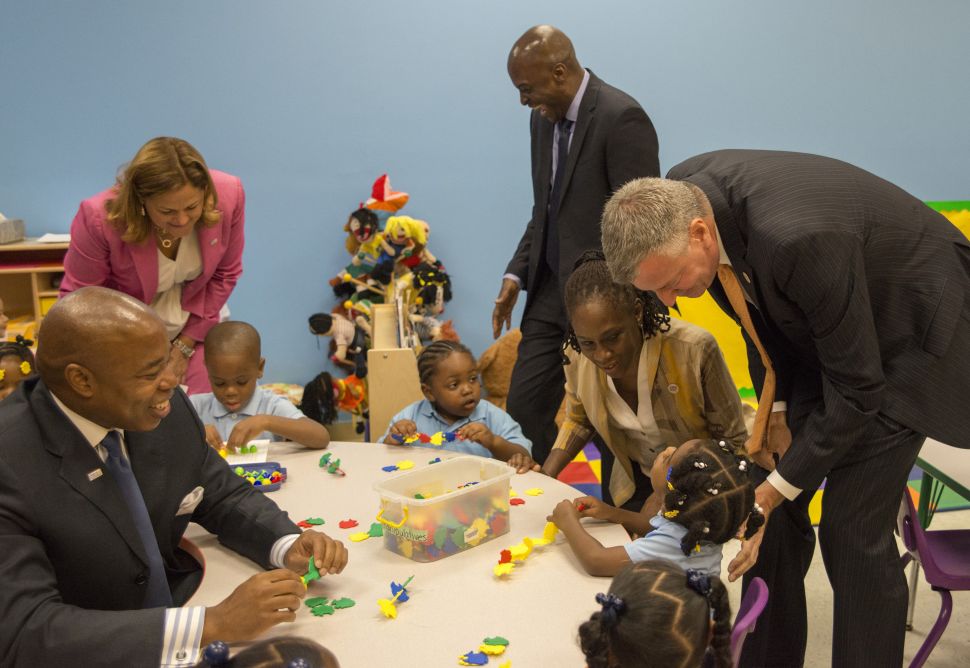