Protesters calling for more attention to the issue of climate change may have tied up traffic Monday, but they sure got their point across.

Mayor Bill de Blasio praised the intentions of those who took to the streets over the last few days — including yesterday’s Occupy Wall Street-style protest that was met with just over 100 arrests — after delivering a short speech about the city’s commitment to reducing carbon emissions at the Untied Nations Climate Summit today.

“I think the First Amendment is a little more important than traffic,” Mr. de Blasio said when asked about disruptions caused by yesterday’s demonstration, a more freewheeling affair than the organized People’s Climate March the day before. “The right of people to make their voices heard, regardless of their views, is a fundamental American value, and we’ll protect that value.”

Mr. de Blasio marched in the demonstration Sunday, alongside unions and even big businesses calling for action on climate change, and said it showed the momentum building for action on the issue.

“This is not the first time that you’ve seen a scenario where the people are leading, and the leaders have to get out of the way and follow the will of the people. I think it’s galloping forward now, so this gathering today is crucially important,” he told the Observer, referring to the U.N. summit, “but I actually think the march set the stage even more powerfully by suggesting that the grassroots are already there.”

The mayor was not part of yesterday’s “Flood Wall Street” event, but his police department eventually arrested those protesters who would not move from the street last night. Mr. de Blasio — who himself has been arrested protesting fire house and hospital closures — said he respected the Monday protest.

“I think Occupy has an approach, and I respect them and their message, but they have a different approach than a lot of other people,” Mr. de Blasio told the Observer. “What I was particularly pleased with yesterday was I thought the NYPD did a fantastic job allowing the protestors to make their point, but handling the situation with a lot of flexibility and restraint. And it ended up, obviously, with very few arrests and very little conflict. So I think Occupy was consistent with its previous tradition but the NYPD, consistent with how they have handled Occupy in the past, did a great job striking the right balance.”

The mayor said the event was a good example of “civil disobedience as it’s supposed to be — meaningful, peaceful.”

Mr. de Blasio said it won’t be the last time protests inconvenience the city, particularly since it hosts the U.N.

“It’s part of our responsibility as the host of the U.N. to handle that appropriately. I think everything was done the right way. Obviously as New Yorkers, we would like our streets to move along, and we’re going to do everything we can to achieve that. But we have to respect peaceful protest,” Mr. de Blasio said. 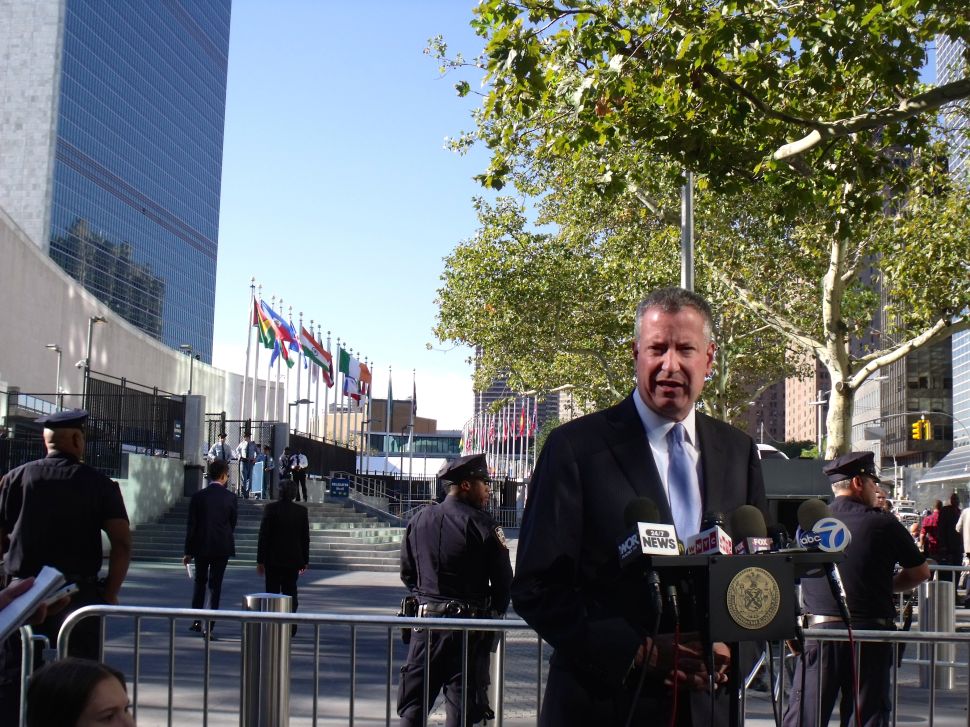