What to do about Birds & Bubbles, a new subterranean restaurant on the Lower East Side that sells, as the name indicates, fried chicken and champagne? Gotta go, I guess, but man, I didn’t want to. After the summer of Ferguson and Eric Garner and 16,000 devastating words by Ta-Nehisi Coates, race relations burn bright in my mind. My white mind, but nonetheless mine.

Stereotypes one wishes buried have been exhumed these last months, to dance around shouting, “Not dead yet!” And dynamics one once thought we might be getting past—for instance, throwing a pregnant woman onto Fifth Avenue in Sunset Park—trot doggedly beside us, keeping pace.

Then this, more fucking fried chicken, here cheekily paired with champagne. I get it, it’s high-low. Or as the restaurant says, “an elevated take on Southern classics.” But really, is that all it is? Fried chicken is, when considered, one of America’s great freighted foods. For hundreds of years made primarily by black women in the South, it still bears a racial connotation, under that regional one.

Even as fried chicken has become a deracinated trend in the city, I don’t think one can entirely divorce all the ugly cultural breading that has clung to its flesh. When, as it is at Birds & Bubbles, it’s forced to play the “low” card in the haute-low split, when Birds & Bubbles itself builds a shtick on irony and reinforcement of that hierarchy, the unholy taint of ancient enmity at worst and modern privileged blitheness at best, grows into an un-ignorable stench.

Or maybe I am really the racist one here who, like a sanctimonious pervert, finds evidence of my own sin in even the most benign gesture. Perhaps I’m the tetchy bigot, seeing dark phantoms of watermelon-eating fried chicken-loving stereotypes hovering over the shoulder of every grease-covered foodie digging into a bucket of fancy legs and thighs. I wouldn’t be the first to reinforce a stereotype while trying to combat it. (In fact, it wouldn’t even be the first time I’ve been accused of that.) Also, can a white person really not eat fried chicken—is this the craziness for which I advocate?

You can see why I’d rather just avoid the place altogether. That’s a shame because it really isn’t bad. Is it great? No. Slotted into a space so narrow it feels extruded, in a basement so deep it can’t help but feel penned in, the restaurant has some major flaws. But it also offers moments of real pleasure. Especially when one soldiers past the narrow bar and dining room and into an expansive back garden with tabasco pepper trees and strings of light, twinkling on a crisp fall night. Especially when one avoids the fried chicken.

The bird of Birds & Bubbles comes in a bucket—$16 for a half-chicken listed under the phrase “Fowl Play.” The menu is blighted by terrible puns. If you’d like to take the place literally, for $55 there’s something called a “Splitty-Split,” a half-chicken and a split of champagne. Speaking broadly, I’m ready for fried chicken as a trend to be dead. In fact, I thought it was for a little while but, as Pacino says, “Just when I thought I was out, they pull me back in.”

At other places, even other places with ampersands, the case can convincingly be made for its continued popularity. But at Birds & Bubbles, though it’s gone through the 12 stations of bourgeois bird—from a farm in Pennsylvania to death and an afterlife of dry-brining buttermilk-dipping, pan-frying and cooling and combi-ovening—it feels and tastes as tired as the trend is. Greasy’s fine. But the bird, when I had it, was greasy to no higher purpose. There was no subtlety of flavor or spice, or even variegated texture. The deep fried coat was as dark, heavy and out of season as a mink stole on an August day. Over-fried, it tasted only of fry oil. The bird was edible but barely and scarcely enjoyable. Of all the things to get wrong, muffing what is one half of the name—and the only part made, not curated—is a pretty big fail.

There were other problems with the fryer, too. Pimento cheese croquettes ($7), the appetizer that sounds most appetizing, were the size of golf balls, nearly as hard and even more dangerous. Biting into one, which took force, yielded an explosion of scorching hot pimento cheese, which had liquefied into a dangerous pool in the bottom. Often dishes aren’t delicious but they’re rarely as treacherous. It was my Liebeck vs. McDonald’s moment.

As for the case that birds and bubbles actually go together, which, I guess, would neatly sidestep or at least mitigate concerns of cultural insensitivity, that argument relies on having really stellar fried chicken with which to pair the champagnes. For me, that didn’t happen and I remain unconvinced. The list is, however, well-chosen and approachable; bottles range from $80 (Savart “L’Accomplie” Blanc de Noir, Ecueil) to $500 (Salon 1999, Le Mesnil) and glasses are about $17. The Francois Baur Cremant D’Alsace ($13) I had was, as it was listed, mineral-y and also, as could be hoped, delightful. The premise, however, that either champagne or fried chicken are ennobled by their pairing was untested. All I know is the champagne sure tasted good washing away the fried stuff.

There are some solid hits on the menu, too. Sarah Simmons, the North Carolina-raised owner, excels at seafood, or here, “Chicken of the Sea.” Groan. Most of her genius concerns shrimp. She uses a shrimp stock in a crawfish étouffée ($19), a dish revived from Ms. Simmons’ earlier project, the culinary salon City Grit. It is flavor on flavor on spice and more flavor: cayenne, Creole, amen, roll over. Another triumph is shrimp and grits ($24), a victory for clever late-in-the-game substitution. Ms. Simmons subs tasso ham from Louisiana for bacon and uses barbecue sauce instead of the traditional chicken stock. The only thing left unimproved is the cheddar grits and those are perfect anyway. In a shrimp rillette ($9)—essentially shrimps and cream cheese blended—which tastes like solidified chowder, she distills New England into a Mason jar. This must be eaten.

But overall, there’s too much shoved into Mason jars, too much that seems crafted to adhere to the whims of the culinary fervor of the moment, but not enough care given to execution of dishes or the deeper implications of ideas. A bavette steak ($24) on cornbread panzanella—a great idea—came so rare the muscle fibers hadn’t yet had a chance to breakdown. It was, in other words, totally raw.

Totally raw is also how Birds & Bubbles left me. I don’t think Birds & Bubbles should be shunned for its questionable cultural sensitivity. But I do think Ms. Simmons is playing on some pretty hot grounds. It’s a thicket that deserves to be thought about. What it means to open a place that traffics so aggressively in binaries such as high and low, rich and poor, bubbles and birds, North and South. White and black? No, the issue isn’t black and white. All the more reason it shouldn’t be waded into for the expediency of alliteration and ampersands and whatever current trend holds the food world in its thrall. 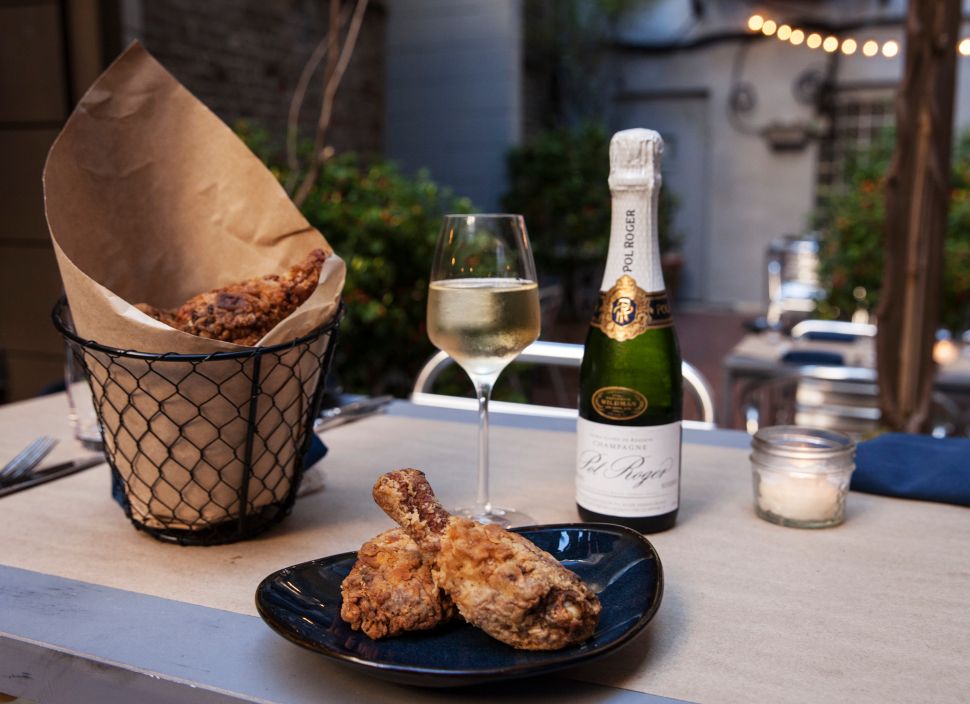