Nobody listened to Nanny Bloomberg.

Following the release of a government study which revealed that over a million New Yorkers smoke cigarettes, the effectiveness of anti-smoking policies put into place by Mayor Michael Bloomberg is being called into question.

The million smokers represent 16.1 percent of the city’s population and the statistics were further broken down by race, gender and borough.

New York City’s smoking rate decreased from a high of 21.5 percent in 2002 after then-Mayor Bloomberg outlawed smoking in restaurants and other indoor public places. The city also heavily taxed cigarettes and ran ads showing smoke-damaged internal organs. These measures were controversial at first, but Mayor Bloomberg was later hailed as a trendsetter.

The number of smokers has been slowly creeping up since 2011, however.

“We must take this increase in New York City smokers very seriously,” Mary Bassett, commissioner of the New York City Department of Health and Mental Hygiene, told the Wall Street Journal. “We cannot lose ground on the many successes we’ve had in reducing smoking in our city.”

Funding for anti-smoking campaigns in New York City has been cut 47 percent in the last five years and the study makes clear why: seventy-six percent of smokers are light daily smokers, who only smoke up to 10 cigarettes a day.

This group of puffers had not been targeted by the city before. To make up for this oversight, the Health Department will be rolling out an ad campaign over the next month showing the dangers of light daily smoking.

The National Center for Public Policy Research, a conservative think tank, took the city to task for its smoking regulations.

“This failure in public policy provides the most striking and objective evidence to date showing that Mayor Bloomberg’s aggressive anti-smoking campaign has been ineffective,” said Jeff Stier, senior fellow at the National Center.

The group thinks e-cigarettes are a promising development to help people quit smoking. Because of this, they dislike Mr. Bloomberg even more; one of his final acts as mayor was signing a bill subjecting e-cigarettes to the same restrictions as traditional cigarettes.

E-cigarettes do have some benefits over traditional cigarettes–they do not burn tobacco, so smokers are simply breathing in nicotine rather than more harmful carcinogens.

However, e-cigarettes also have serious risks of their own. The American Heart Association has been cautious in endorsing them, because they are unregulated and contain toxic chemicals. The Centers for Disease Control and Prevention also get over 200 calls a month about e-cigarette poisoning, many of which involve children.

When asked about these dangers, Mr. Stier went on the defensive.

“This is a highly politicized issue, whose underlying concept is harm reduction,” Mr. Stier told the Observer. “We don’t know the risks, but it’s less harmful than the underlying behavior. The government is ideologically opposed to anything that looks like smoking.” 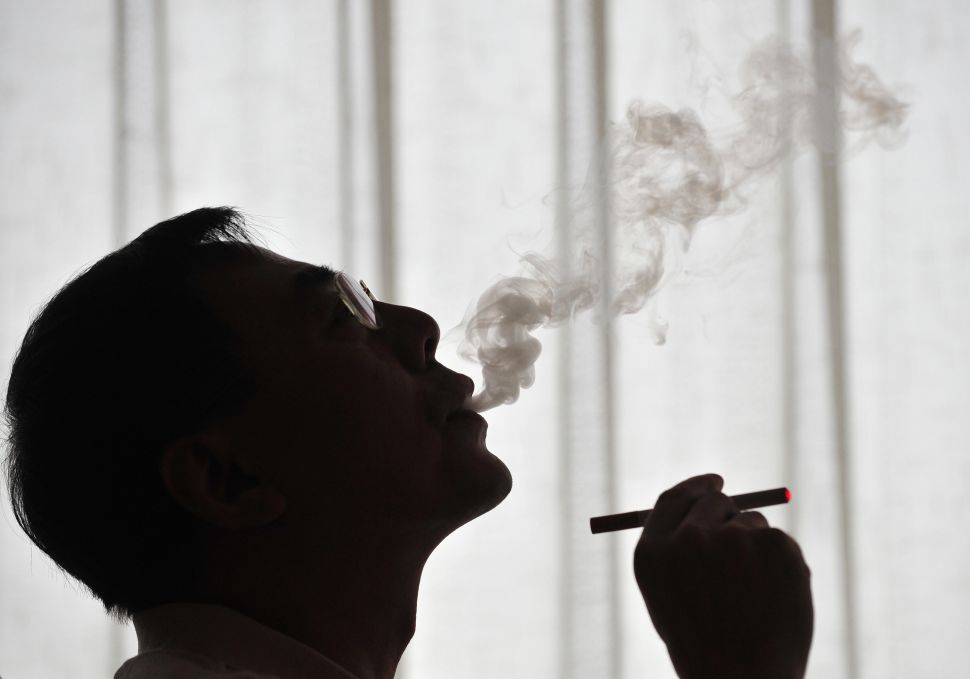