It’s hard to talk with a gun in your mouth. (HBO)

Young Nucky is still sweeping away. Sweep sweep, young Nucky. We can tell he’s dreaming of a better life because he’s in the hotel, staring at the nice things. Now we’ve discovered why Nucky wants to live in the hotel.

“Don’t walk into the room like a question mark,” snarls the Commodore, before letting Nucky get a sneak peak of a (too) young woman (Gillian?) before laying out a map of Atlantic City…as he wishes it to be. There’s a lot of talk about lines and how races shouldn’t comingle and trains and ferries. We get a sense of how the Commodore was always a jerk. “Don’t try to parse me!” He yells, before trying to fire Nucky for um, not being in school. It’s a legit reason, but we’re supposed to feel like the Commodore is an unfeeling jerk. Which he is, but come on, these flashbacks.

Back IRT (in real time), Margaret is teaching RJ, the bodyguard how to speak English. He now knows how to say “The airplane is cancelled,” which a) seems like a lot of progress for all of one day and b) maybe that shouldn’t be the first thing to teach a guy. Perhaps this means he will be less angry for ears.

Nucky wants to cut through the nonsense, and Margaret is mad that everyone assumes she was sleeping with Rothstein. “I just asked myself what you would do,” Margaret explains while divulging the stock market tip scam she was running with Rothstein and her boss. (Which is still very unclear, by the way. Did her boss know that Rothstein was Rothstein? If she was supposed to be helping Rothstein, why did she continue to trade in on his orders after his death?)

We see a newsreel of Public Enemy Number One, obvi, Al Capone. He’s watching it with all his buddies, much in the way you imagine Mark Zuckerberg did when The Social Network came out, albeit with less Appletinis. “BANG BANG BANG!” yells Capone, before going full Pesci on one of his underlings. “You laughing at me??” #ScorceseShoutout. Capone wants to watch the movie again, but Lucky Luciano thinks twice is enough. On his way out he sees Van Alden/Mueller, whom he recognizes but can’t place. “No sir, I don’t know you,” Van Alden grovels, playing the part of Mueller.

“You sound cranky,” Sally Wheet says when Nucky calls to tell her that his flight has been cancelled because of rain. Despite being business partners, Sally gets the same snappy treatment that Nucky affords Margaret, which is a little backwards since Sally is bringing him solutions, not problems. Although Margaret is also making herself useful: lest Nucky forget that she can entertain other people besides the help, Joe Kennedy pops by for a visit and is utterly charmed by Mrs. Thompson. (See, I told you that this would turn into the plot for Picture Perfect!) They have the same people (Irish Catholics). But Nucky is getting super jealous of the way both Joe and Margaret are bouncing their shoes in tandem. “Scotch and rum don’t mix,” Joe tells Nucky apologetically, turning down the offer Nucky crankily put forth last week. Joe offers Margaret a ride back to New York, because the Kennedys are the best, already, but Nucky wants Margaret to stay. Joe didn’t realize who Margaret was, but boy is his face red (not really) when he realizes it’s Nucky’s wife.

Back in time, Nucky is trying to impress on Eli how poor they are, compared to other people. Eli doesn’t get it, natch, because he has nothing to compare it to. They decide to break into the hotel, so Eli can also become the worst kind of striving criminal that his brother is. What’s really frustrating about these flashbacks is that you don’t really see Nucky or Eli in these younger characters. You think they’re going to steal something, but no, they’re just flushing the toilets and take baths, eventually getting caught by the nice guy sheriff.

Nucky and Margaret go to a lunch where Margaret is suspicious because Nucky is being too nice to her, and she thinks it’s because Joe Kennedy hit on her. It took me a minute to figure out her logic, but yes…Nucky is pleased when men covet what he has. It’s what he’s always wanted: to inspire the type of hateful respect that the Commodore put into him as a boy. Having Margaret around as the nice, shiny object is one way of doing that.

Lucky has come to Chicago to convince Capone to stop being such a loose canon (no, they don’t say that, I wish) and adhere by the same rules everyone else. But while taking a trip down memory lane of what they’ve been up to for the last ten years, Lucky suddenly remembers that Van Alden pinched him and Darmody, all the way back in season one. The chain of command in Chicago does seem a little inefficient: Capone tells one guy to collar Mueller, and suddenly all the guys in the room are screaming at each other “Find Mueller! Find Mueller!” They need to streamline this service, ASAP.

Nucky and Margaret get drunk and Nucky admits that he’s broke, before expressing admiration for her ability to raise a family. Then they talk obliquely about the affairs they did or didn’t have, until Margaret rightfully asks “Is this a fight? I can’t tell.” Me either, sister. At this rate, these two will be out-Underwooding the Underwoods by the time Frank and Claire are in diapers. Then they hold hands.

Van Alden is under the microscope, hardcore, and even though he’s obviously thought a lot about his cover identity (he used to own a wheat farm, went belly up because of brown rust), Capone still makes him kneel before putting a gun in his mouth. It’s a testament to Michael Shannon’s comedic talents that I still let out a horrified giggle while he tried to talk around the muzzle.

Capone gives him 30 seconds to make his case, which he does, in what turns out to be the best part of this season: “I’ve worked for you for seven years, I broke heads in Cicero, I set up Dean O’Bannion, I make my number every week. Maybe I’m a federal agent, maybe I’m a bigamist, maybe I’m a murderer on the run. Believe what you want, I can’t stop you,” says Van Alden/Mueller, who is definitely all of those things. “But that’s not what matters now. What matters is this man comes in from out of town and starts telling Capone how to run Capone’s business in Capone’s house. And and and…I’d say that is pretty goddamn disrespectful!”

Even Capone is impressed. “You can rule by fear, or you can rule by love,” he says to Lucky. “Remember that if you’re ever in charge.” Van Alden gets a drink instead of a bullet in his head. He’s also soiled himself. As have we all.

Sally is sniffing out that her and Nucky’s partner, Maxime Ronis, isn’t on the up and up. That the Bacardi guy is probably pulling out because the army uprising near the Havana sugar cane fields. Though Ronis promises that’s not the case, so he gets the suitcase full of money.

Flasback! Nucky and Eli aren’t in trouble, nor kidnapped (though that probably would have improved their situation): they’ve been taken to supper at Sheriff Lindsay’s house! “Now this is how a functional family works!” You can almost here Nucky thinking aloud. It’s also the beginning seeds of Prohibition, as Sheriff Lindsay’s wife talks him into speaking to “the ladies” about the crimes he’s seen committed because of alcohol. (Or at least that’s what I got out of the scene. Any other theories?)

In an episode that already had one great scene, is it too much to ask for another? We’ve had time to forget the odd chemistry that Nucky and his wife have, especially when they’re tipsy and/or not mourning their dead lovers, so we can be forgiven for not expecting much from the boardwalk scene. But Nucky’s solution for Margaret—convincing Mrs. Rothstein to take twenty-five cents on the dollar in payback for the missing funds—becomes almost besides the point of watching the way these two characters paw around each other’s motivations, swatting one away—Nucky admitting that he thought if he saved Margaret he could save himself becomes Margaret talking about how lonely he looked in that hotel, all alone, becomes Margaret asking “I don’t have anywhere to sleep…do I?” becomes Nucky turning down her advances and ordering her a hotel room, where she will be all alone (and lonely)—while advancing others. The words not spoken between Nucky and Margaret speak volumes, maybe because, unlike the rest of our ragtag ensemble, melancholy and existential malaise comes as naturally to them as shooting a gun.

Meanwhile, Mike the mole finds out that Mueller is actually Van Alden, and Capone says goodbye to Luciano. Is it just me, or are we not actually sure where and when Capone and Lucky’s relationship developed. Did they ever work together before this, and I’m just forgetting something? As much as Capone puts on his “happy face” when Lucky’s on his way out the door, he spits and calls him a piece of Sicilian shit the moment his back is turned. Obviously someone planted a seed during the visit, but I doubt it was Lucky’s: Van Alden has successfully tapped into Capone’s sore spot about not getting enough respect. (Cue Rodney Dangerfield impression, in a hail of bullets.)

After Lucky leaves, Capone beats one of his guys to death with a miniature Statue of Liberty Empire State Building. #Metaphors

And just for funsies, we’ve got another fucking fantastic moment at the end of the episode, when Sally is pulled over by the Cuban army for breaking curfew. When she puts up a fight about her business in Miramar, it ends with guns pointed every which way. “All I’ve ever done in this world,” Sally begins, hand on the trigger, but a shot from one of the guards catches her right in the throat and she’s done. No more Wheet/Wheat. Call it the Curse of the Brown Rust.

Finally, one of the first times the flashbacks have paid off, we see Nucky try to get Sheriff Lindsay to kill his father. “Don’t make me do my job, because I will,” warns Lindsay, before adding: “Deputy Sheriff Thompson.” Oh man, what a bad, bad decision that was. Also: what kind of job interview involves making sure that you’re handing a gun to the boy who just said he wanted you to murder somebody? The best kind, obviously. 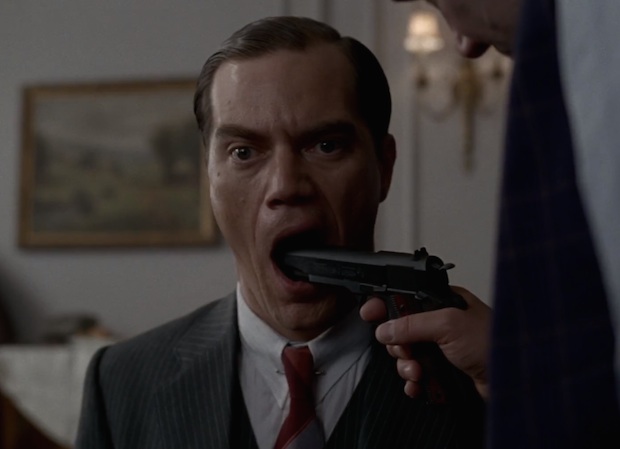