In the good old days, when Playwrights Horizons was snugly ensconced in a brick warehouse down in Greenwich Village, I saw some great plays. Since moving to 42nd Street, where the term off-Broadway no longer means what it used to, I’ve seen some of the most pretentious catastrophes ever written. A new anguish called Bootycandy is the newest head-scratcher. Thanks to another misguided rave in The New York Times, the night I saw it the sold-out house was walking out in sections, only three audience members stood at the end and the applause was polite but weak. Don’t say I didn’t warn you.

Bootycandy is both written and directed by Robert O’Hara, a familiar face in the country’s regional theaters. He is not ready for prime time. The play is being touted as an examination of the travails of being gay, flamboyant and black at the same time. It is nothing of the kind. The title is interpreted as the slang for a black man’s penis, because if anyone wants to lick it, it should taste sweet as a Popsicle. Overwhelmingly surreal, it follows the disconnected threads in the life of a black homosexual (yes, they’re gay, too, although in their culture, they risk their lives to be) named Sutter, played with varying looks, attitudes and ages by Phillip James Brannon. When he first appears, he’s a confused adolescent in sequined gloves with identity issues and parents who make the illiterate stereotypes on The Jeffersons look as bland as Leave It to Beaver. When he confesses a man tried to follow him home from school, the cartoon mother blames it on reading too many books by Jackie Collins and forbids him from being in school musicals for a year. Acceptable humor ends there.

The rest of the play bounces off the walls as it stuffs the stage with an avalanche of ugly clichés. A screeching preacher (Lance Coadie Williams) who wears red high heels under his Sunday morning Holy Roller robe is particularly over-the-top. Audience members respond like they’re working the amen corner at a revival meeting, but the laughs peter out as the show progresses. A trashy girl with a huge caboose names her baby Genitalia. A white man played by the marvelous actor Jesse Pennington (so memorable in Franny’s Way, also at Playwrights Horizons) and the grown up Sutter have a long graphic scene in a gay bar talking about how they want to experiment with each other in bed. Mr. Pennington, the only white actor in the cast, is surprisingly the best thing in the production, playing a variety of victims and buffoons with totally different hair styles—a prissy moderator of an awkward Playwrights Horizons writers conference, for instance, in which the four black actors are working on the various vignettes we watch throughout the evening in unfinished scenes.

In Act Two, there’s a miserable scene at the dinner table where the vicious mother from Act One delivers a venomous but irrelevant monologue about a co-worker she hates. Mr. Pennington, a fearless artist if ever I’ve seen one, flaps out his Johnson and bangs it on the table before they take him to a hotel and rape him with a black dildo. He jumps off the roof, which is the next best thing, I guess, to jumping off the stage and exiting the play to save his reputation. Next, Genitalia has grown up to be a butch lesbian truck driver who breaks up in a “non-commitment” ceremony with a moronic, gum-chewing girlfriend in a fire-engine red wig while the preacher reads a passage from the Bible written by Cicely Tyson. It’s a satirical reversal on same-sex marriage that becomes “Today I become your ex and you become my Ex-Lax.” Suddenly the house and work lights come on and the stage manager announces they are skipping the “prison scene.” The actors come out of their orange prison costumes (orange is the new black?), change costumes while the stagehands readjust the set, and now the preacher is the grandmother in a nursing home. Mercifully, it grinds to an end, without a word of explanation.

Duped again by the Times, the audience on the night I saw it filed out of Bootycandy baffled and disgusted. A few of them cursed out loud. Frankly, I am surprised that audiences of color are not picketing the theatre. The play sets back the cause of humanity at least 50 years to the days of Amos’n’Andy. Admittedly, there are a few funny lines, but they’re too filthy to repeat in a mainstream newspaper without accusations of racism. It’s a surreal evening of African-American insults in which the black characters are all mentally challenged, ignorant as road kill and so illiterate they make Stepin Fetchit, Willie Best and Rochester seem as sophisticated as record-breaking contestants on Jeopardy. Playwrights Horizons has lamentably become a theater of absurdist experimentation, which is O.K. as long as they don’t charge money for it. Bootycandy is an outrage that, in all fairness, should be paying the audience. 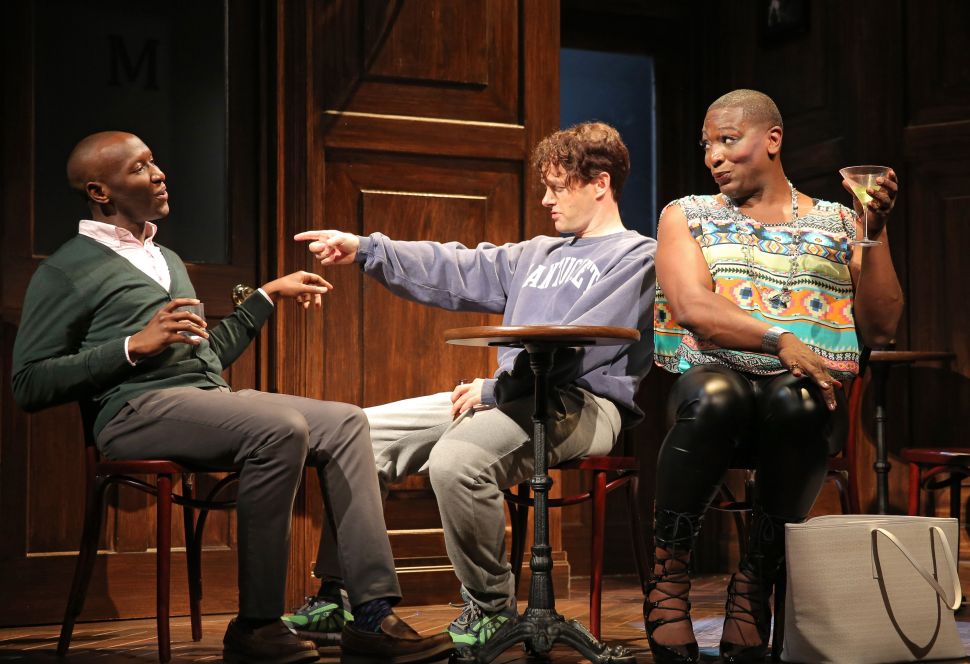