Kevin Maher with producers M. Sweeney Lawless and Jay Stern at one of his shows. (Photo: Matt Glasson)

Christmas in September may lack a certain ring, but Santa is indeed visiting Gowanus this weekend. Instead of his elvish attendants, he’ll mix and mingle with Star Wars aficionados, pizza historians, lovers of the obscure, science PhDs, trivia experts, grilled cheese gorillas, and comic book geeks—because even Mr. Claus needs a break from the hustle and bustle of the workshop to sip on a few cold ones and answer questions about Musical Nesting Dolls.

This Sunday at the Bell House, some of the city’s most noted nerds are throwing a party for all those who are uninhibited, self-proclaimed fans of cult classics, mathematics, or even Mr. Fantastic. The Big Quiz Thing’s Noah Tarnow conceived the First Annual Brooklyn Brain Jam and–thanks to successful collaborations with Nerd Nite’s Matt Wasowski, Kevin Geeks Out’s Kevin Maher and The Story Collider’s Ben Lillie–the daylong entertainment spectacular is finally coming to fruition. With roughly 16 performers, Brain Jam promises a variety of fun and frivolity but also some depth that isn’t necessarily intrinsic to most festivals around the city.

“I think a lot of people are going to see shows thinking that they’re going to get mindless entertainment, but this is the exact opposite,” producer Julie Wilkinson said.

No matter any knowledge one might garner over six hours of lectures, games, and drinks, the actual event promises big laughs from big brains. Glen Heroy, a current clown and 12-time Macy’s Santa Claus, will pose for pics in full North Pole garb before giving a talk on what it was like to portray the mischievous man with a belly that shook when he laughed like a bowl full of jelly. Pete the Retailer and Alex Robinson will also enjoy some stage time alongside Maher as they chat about their daily podcast, which analyzes a single minute of content from the Star Wars series. And though the bill may seem male dominated, there are some women on it: Tenebrous Kate is making an appearance to discuss the lesser-known intricacies of Turkish cinema.

Meanwhile, the hosts will also be doing what they do best, whether it’s leading a trivia session that strategically borders the boundary between a good time and competition, making science seem sexy outside of a lecture hall, telling stories that are personally moving and may inspire tears, or shamelessly indulging in investigations on pop culture.

“My target audience is people who are not ashamed of passionately loving the pop culture they love,”  Mr. Maher explained. “There’s no guilty pleasures. It’s a celebration with a good sense of humor.”

While Brain Jam’s demographic is full of Trekkies who can quote every line of each movie with pride, they’re also young, hip New Yorkers who need a place to give into their quirkier sides. “Our typical fan is a cool nerd. Early ’30s,” Mr. Tarnow said. “They don’t live in their parents’ basement. They have a dating life. They have a job.”

And it’s these very “cool nerds” that craft continuity in Brain Jam’s diverse program: they’re individuals who appreciate intelligent humor, no matter the topic. “The gloves are off,” Mr. Maher claimed. “Nobody’s condescending. Nobody’s talking down to the audience. We know that the audience is really smart.”

Though the schedule allows for conjecture about what is to come on Sunday, even the hosts aren’t positive about what to expect, and to them, that’s a good thing.

“Like I said, first annual. You know, I’m looking forward to being surprised,” Mr. Tarnow said.

So really, in this crazy, comical, witty, wacky world, anything could happen. But at the very least, according to Mr. Maher, Sunday promises “a smart, funny show.” 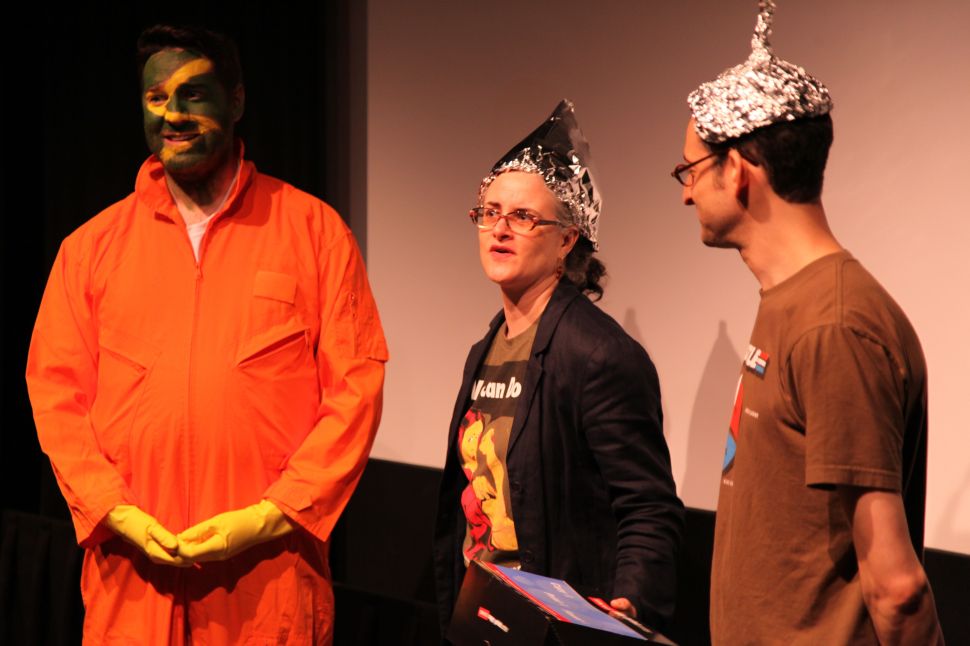