Coach debuted a new series of holiday ads yesterday starring a number of cool young stars including Banks, the singer who was practically the official musician of New York Fashion Week.

While the brand’s been on the up-and-up for the past year or so, this seems like the definitive symbol that Coach is now officially in-the-know, and vibrating on the same frequency as other high-end New York labels. Shot by Mikael Jansson, styled by Karl Templer and art-directed by Fabian Boren, the ads are a far cry from the label’s holiday collection 10 years ago, which prominently featured hot-pink patchwork totes. Their new vibe is less technicolor ode to the American housewife, more moody Americana, and it’s all thanks to their new creative director Stuart Vevers, previously of Mulberry.

But it feels like we should take a minute to mourn the old Coach, which once loomed so large in the consciousness of the budding American fashionista.

If you were a teenager in the mid-2000s, you probably remember hearing the name Coach whispered reverently throughout your high school’s halls. To carry a slouchy hobo bag printed with those big brown C’s was to instantly double or triple your social status.

This was a more innocent time, a time before New Jersey high-schoolers knew what Burberry or Louis Vuitton were (but don’t worry, the destruction of those labels’ signature prints would happen a few years later). This was a time when Nicole Richie was still a reality star and Britney Spears was still aspirational (she was a fan of the wristlet). This was during the Bush years, when everyone was just a little more basic.

Reed Krakoff had been the label’s creative director since 1996. He succeeded in blowing the brand up from a smallish leatherwear house to a retail juggernaut. He now designs his own eponymous label, but we have him to thank for the much-knocked-off C-print’s reign of terror.

My friend Jess was one of the first girls I knew to carry a Coach bag. She procured a black C-print number after learning they were all the rage in her friend’s slightly wealthier school district. She managed to ignite the trend in her own high school. Soon, girls she didn’t even know were stopping Jess in the halls to assure her, “I’m saving up all of my money from my part-time job to buy a Coach bag.”

My own Coach bag was a buttery black leather number that I couldn’t believe my mom had actually gotten for me. I’d begged for months, and she had finally relented and bought it as a Christmas present after I promised I didn’t need it to be covered in logos. (It’s now available online for $87.)

As Jess tells it, Coach bags and Juicy Couture tracksuits were the dream. “Black track suit, black Coach bag, tan Uggs and a bejeweled headband,” she recalls. This is what we all sadly thought was the uniform of a glam mid-2000s jet-setter. “I was like, ‘I’m ready for the airport! Except… I’m not going anywhere.'”

But it didn’t take long for Coach to become a little too ubiquitous. There were the Canal Street knockoffs, of course, snickeringly referred to as Goach bags. But even the real deal became synonymous with a particularly milquetoast suburban sensibility. At a certain point, it was tough to tell which were more plentiful at your local PTA meeting or pep rally: Coach bags or Starbucks Frappuccinos.

The nail in the coffin for me came when Coach opened up shop in my Safety mall.

See, every suburban teen has several malls at her disposal, which can be categorized in a manner similar to the colleges to which she’s applying. There’s the Reach mall, which has a Saks and a bunch of designers you can’t pronounce because you’re 16 (for us, the Mall at Short Hills). Your Match mall has a Nordstrom and probably a Sephora, but also an Old Navy because hey, who are you kidding? (This was the Freehold-Raceway Mall.)

As Coach extended its reign to the nation’s Safety malls, it stopped being aspirational for teenagers and young women and seemed to recline comfortably into becoming every suburban mom’s go-to spot for leather carryalls. The label doubled down on its clean-cut, preppy aesthetic. Perhaps they were hoping to conjure the magic of J. Crew, an approachable mall brand with a rarified, WASPy feel.

But we kids were moving on to fast fashion. Forever 21s and H&Ms were popping up everywhere, and individuality trumped designer bags. Labels were no longer impressive in and of themselves; you had more cachet if you could put together clothes from a variety of stores, at a variety of price points, and look like yourself rather than a clone of Bennifer-era J. Lo.

But now, Coach is refusing to join Juicy Couture and Abercrombie and Fitch on their march to the rhinestoned mid-2000s retail graveyard. With the addition of Mr. Vevers, whose impressive resume includes stints at Calvin Klein, Givenchy and Louis Vuitton, the brand is looking forward with an earthier feel that matches the public’s current obsession with high-low mixing-and-matching.

The numbers aren’t available yet to determine whether or not Coach’s new approach is working. But Mr. Vevers has certainly created quite a few covetable pieces of Americana in his latest two collections for the brand. He’s giving the quintessentially American label a feel that’s more rock-and-roll than sorority house.

And for those who feel nostalgic for the brand’s earlier identity, don’t worry: the C-print lives on. And it might look pretty cool next to Coach’s fresh fall line. 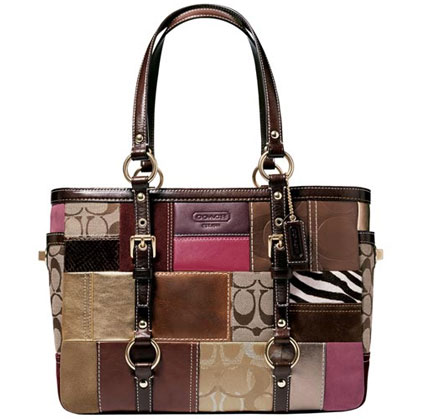