Carine Roitfeld is throwing an end-of-Fashion-Month bash, mixed with a release party for CR Fashion Book and there are lots of American pop culture types there. And they’re all wearing pretty much the same thing, weirdly.

This may be because the event’s theme is “Inspired by Carine,” and if you’re being inspired by Carine, chances are you’re going to be in head-to-toe black. Still, how many disco-era jumpsuits can one party support?

Here are all of the best Instagram photos from the party thus far. Yes, many of these images come from Bieber and Selena fan accounts — their fans have annoyingly overrun the event’s Instagram hashtag. But Justin and Selena’s psychotic devotees do tend to be everywhere, kind of like sweaty pubescent cockroaches, so they’re at least posting some good pics.

We combed through the dozens of repeats of the same Bieber and Selena images and found, ah, finally, a photo of an actual, legitimate fashion person, the woman of the hour, Carine Roitfeld. Let’s see, what’s Carine wearing? Oh, wait, that looks like — that’s a lot like what Kim Kardashian wore to Givenchy yesterday, but with a hint of saloon…

And hey, this is strange. Fashion blogger Chiara Ferragni also opted to channel Kim Kardashian’s day-old outfit, a “pair” of black lace pants with black undies. Did she and Carine decide together that they’d copy Kim’s look? Or did she just assume that since the one half of the #worldsmosttalkedaboutcouple had already worn her outfit, she’d be safe to wear it tonight?

This is just so deeply strange. Like, wear something else! EVERYONE has seen this outfit already! It’s like if someone wore Kate Middleton’s white McQueen dress to the Emmys immediately following her wedding. If anything, it’s proof of Kim Kardashian’s impossible-to-place genius. We may not quite know what her “talent” is, but the girl has incepted Paris Fashion Week no less than three times now. You have to really know your stuff to have Carine Roitfeld show up at her own event channelling you.

Okay, moving along, @CRFashionBook has posted a photo of “the crew” which today includes: Kris Jenner, Kim Kardashian, Ms. Roitfeld, Riccardo Tisci and Ciara. Kim and Ciara look like they, too, called each other up to figure out what to wear together.

Here Mr. Tisci, Kim and Ciara are pregaming like the world’s most glamorous beer pong team.

A closer look at the bedazzled drink coaster stapled to Kim’s blazer:

This is kiiiiiiind of awkward because Kendall may or may not have gone on a date with Selena’s ex, a young singer and dancer named Justin Bieber, earlier tonight. If they did, Kendall has got to nip this in the bud, nothing good will come of it. Twitter death threats from Beliebers will be the least of it. And now we’re rooting for Kendall for no apparent reason; this is how the Kardashian PR machine works.

Cara Delevingne is the only person taking a risk here. Go, Cara.

Here is Paris Hilton, hiding from Kim in a bathroom with a stranger:

Jamie Bochert didn’t get the all-black memo. Her outfit doesn’t look very #INSPIREDBYCARINE, does it? Still, she is working it like Shelley Duvall, if Shelley Duvall lived at Studio 54.

The hilton sisters look as gorgeous as ever! #inspiredbycarine

Here is a scene from inside the party. We’ve got, from left, Kris Jenner, Justin Bieber, Kim Kardashian, Kendall Jenner and Gigi Hadid. Kim has the posture of a Little League coach shooting one of his players straight about fielding techniques. She looks so serious. What could she and Bieber POSSIBLY be talking about?

We haven’t seen any photos of Kendall and Selena together, but hopefully the night won’t end with a brawl. Wonder what Kris Jenner talks about at these parties. 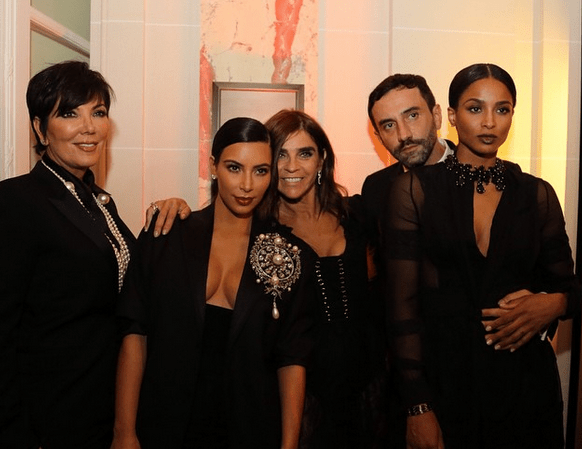