During their first joint, on-air interview for NJTV’s “On The Record with Michael Aron” tonight, CD3 candidates Tom McArthur and Aimee Belgard clashed over issues ranging from equal pay for women to job creation in the South Jersey district — but the most fiercely debated topic of discussion had to do with both candidates’ roles working in the insurance industry.

Asked by the show’s host, Marie DeNoia Aronsohn, who sat in for Aron, about whether Belgard agreed with claims in a recent Democratic Congressional Campaign Committee attack ad accusing MacArthur of shortchanging victims of natural disasters as former CEO of the insurance group York Risk Management, the Democrat  was the first of the two to go on the offensive, saying her campaign did not coordinate with the national organization on launching the ad but that it did raise certain important issues with MacArthur’s background.

“Mr. MacArthur talks about how he’s a self-made business man,” Belgard, a Burlington County Freeholder and the Democratic candidate in CD3, told Aronsohn. “He made billions of dollars and if he did it at the expense of other people’s perils, now he is moving into a district where we have thousands of people still out of their homes because of Hurricane Sandy. There’s a history here … of having been CEO of a company that has been sued multiple times for denying claims of people who were suffering from hurricanes, wildfires and the like, and I think it’s something that the public deserves to know.”

That ad, paid for by the DCCC, who’s backed Belgard throughout this race with the aim of winning over the GOP-held seat in November, was the subject of serious controversy this week after the MacArthur campaign forced it off the air with the threat of lawsuit. Echoing his earlier sentiments, MacArthur tonight called the ad’s content “dishonest” and  “defamatory,” and again dared Belgard to publicly disavow it.

He said Belgard has been “strangely silent” on the topic, adding that “you have the right, and I would ask you now would you disavow this dishonest defamatory advertisement.”

Belgard refused, maintaining that the ads paid for by the DCCC and her own campaign are “distinct” — even if the latter’s does raise important concerns.

She later turned the subject to another dark spot on MacArthur’s track record as an insurance executive, pointing out that his company continues to face class action lawsuits for refusing to pay its employees overtime. She also blasted the Republican for his position on legislating for equal pay for women, which he’s opposed because it could lead to more “litigation” for companies.

“You can’t talk about creating jobs but not paying people a fair wage,” she said, adding later that “sometimes we need litigation, sometimes we need to stand up for people who don’t have a voice.”

“I think we need to bring people together and start talking about this. It’s 2014,” she added.

MacArthur, however — who left the insurance industry several years ago to serve as mayor in the North Jersey town of Randolph — defended his stances, calling the issues his opponent’s “political talking points.”

He skirted an answer to the question of  whether he’d support legislation requiring equal pay for women in the workplace, saying that he supports the idea but would want to make sure the law “results in equal pay, not just more litigation.”

“Some jobs in this country are eligible for overtime, some are not,” MacArthur said, referring to the overtime lawsuits. “And up to now claims adjusters have been a licensed professional job that doesn’t get overtime. People have the right to sue over that and they have all across the industry, and if they’re successful I’m sure my old company and the rest of the insurance industry will obey the law. But you can’t hold me for a law that’s not on the books four years ago when I ran the company and tell me I did something wrong by people.”

“I think we need people like that in Washington, who know how jobs are created and have had some success in doing it,” MacArthur added later.

But MacArthur later took aim at Belgard’s own campaign, which he has routinely criticised for taking its cues from the DCCC. He decried Beglard’s work as an adjuster and trial attorney at firms like Penn-American Insurance, ranked by consumer group Fight Bad Faith Insurance Companies among the top 100 worst companies for denying insurance claims, and Sweeney & Sheehan PC, a primary defender of of insurance companies.

“I think you need transparency,” he said. “People need to know when they look you in the eye that they can believe you. And I think that has been lacking in this campaign — things like the inability to disavow that defamatory ad.  Things like never talking about you career as a lawyer for insurance company. I think things like that show a willingness to hide the truth.”

“To be an effective voice in Congress you cannot be a tool of your party,” he added. 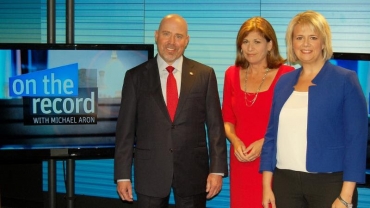