Christie’s is making a worldwide push for new art collectors, expanding its sales of emerging art to London and Hong Kong.

These auctions, called “First Open” and aggressively marketed to young or beginning collectors through talks, tours and parties, were initially controversial when they were introduced regularly in 2005. Critics — some of them dealers selling similar material — charged that the paint was barely dry on these works and that some of the artists had yet to establish track records, or even a stable market. Moreover, some of the art in these sales was simply transferred over from so-called “day sale” auctions, which sometimes feature less-than-stellar material.

But the initiative was huge successful, with a few First Open auctions virtually selling out. Collectors were tempted by lower-cost entry points (many works are under $20,000) for younger artists or the chance to get works on paper for six figures by some more famous ones, such as by Peter Doig or Gerhard Richter in recent sales, whose paintings sell for millions. Concurrent online versions of the “First Open” sales are even cheaper, with some works at $1,000.

Christie’s is targeting both snobs and speculators, it seems, with its announcement of the expansion, noting that the First Open auctions give “both new and seasoned buyers an opportunity… to follow in the footsteps of individuals whose extraordinary eye for quality anticipated many artists’ rise to fame.”

The initial Asia First Open will take place Oct. 5 and will include works by many Asian (Wu Guanzhong, Yayoi Kusama) and Western (Andreas Gursky, KAWS) artists; a New York version is Sept. 23 and a London one Sept. 25.

For an update on the Asian-Art auctions taking place in New York this week, see “Dazzling Prices at Auction Kick Off Asia Week in New York.” 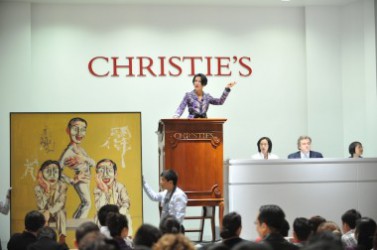