It was a missed connection.

Former Council Speaker Christine Quinn, a top surrogate for Gov. Andrew Cuomo and a leader of his Women’s Equality Party, failed this afternoon to ask Mr. Cuomo’s Republican rival to sign a pledge affirming his support for the 10-point Women’s Equality Act.

Ms. Quinn, milling outside the Women’s National Republican Club in Midtown Manhattan where Rob Astorino was to hold court with supporters, had arrived too late.

“We told Rob Astorino we were coming at 4:15 and he showed up at 3:45,” Ms. Quinn told reporters. She stood on a sidewalk with campaign volunteers and an oversized poster board outlining the pledge. “Have you tried to get around New York City this week? It’s not easy to get on time anywhere, nonetheless early. So the facts speaks for themselves. He showed up a half hour early.” (Mr. Astorino, indeed, was scheduled to appear at the club at 4:15 and arrived before then.)

Ms. Quinn was coy about whether she would try to confront Mr. Astorino again.

“Why would I give my next steps away? As I said before, does Macy’s tell Gimbels?”

Ms. Quinn held a press conference earlier today to denounce Mr. Astorino, the Republican Westchester County executive challenging Mr. Cuomo, for his opposition to the 10-point act–he supports nine of the points but not a tenth related to abortions–and for fund-raising with Carly Fiorina, a retired business executive and former Republican candidate for the U.S. Senate (Ms. Quinn slammed Ms. Fiorina for opposing same-sex marriage and abortion.)

The act, introducing new protections for pay equity, sexual harassment and abortion, has failed in Albany twice. Mr. Astorino, a social conservative, has said he supports nine out of the ten points but opposes a provision that would allow women to obtain abortions later than legally allowed if their health is threatened.

Democrats like Ms. Quinn are hoping to use social issues in the increasingly liberal state to damage Mr. Astorino’s remote chances of upsetting Mr. Cuomo. Mr. Astorino, standing with Ms. Fiorina in a posh lounge on the club’s fourth floor, denied he was ducking Ms. Quinn.

“I don’t run from anybody and I’m certainly not running from Andrew Cuomo,” Mr. Astorino told the Observer.

Ms. Fiorina disparaged the Women’s Equality Act, characterizing the legislation as a gateway for women to receive abortions up to nine months from a non-doctor. (In fact, the bill’s language states that it would codify the Roe vs. Wade Supreme Court decision on abortion and “allow a woman to terminate her pregnancy within twenty-four weeks of the commencement of her pregnancy, or when necessary to protect a woman’s life or health as determined by a licensed physician.”)

“One of the things that happens in politics a lot is people like to give something a name that sounds good, but the reality is something very different,” she said. “The tenth point says that a woman can receive an abortion up to nine months from a non-doctor. Really? This is supportive of women? This is inhumane to a woman or her child.” 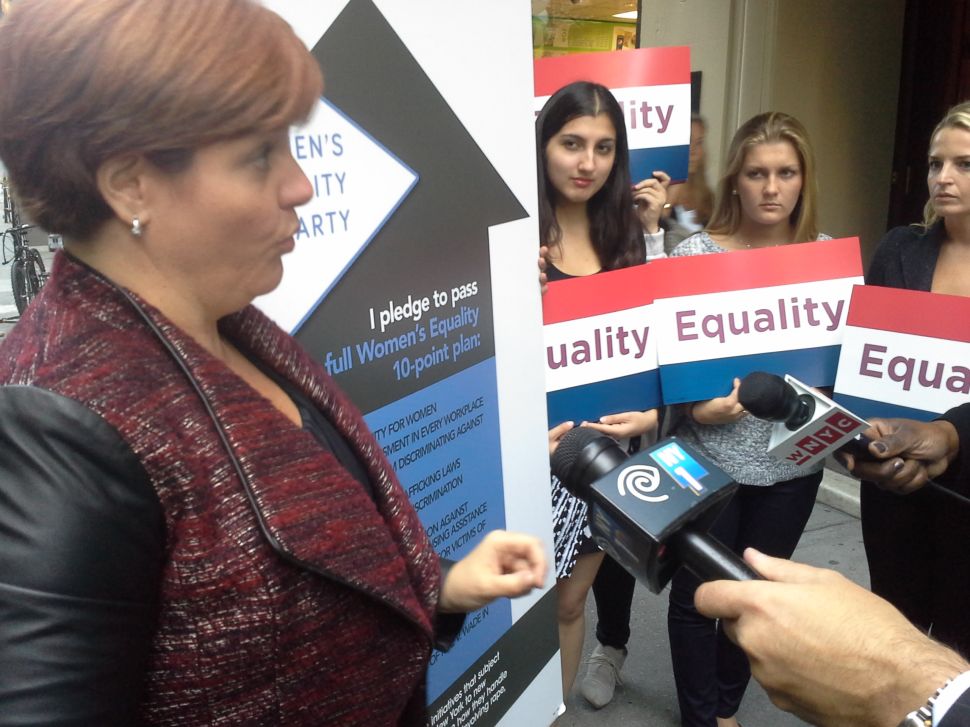