With great fanfare (and nine tractor-trailers to ferry in its notoriously elaborate production), Christopher Wheeldon’s Alice in Wonderland finally wheeled into New York under the banners of the National Ballet of Canada and the Joyce Foundation (performing at the Koch). This Alice is a co-production of the Canadians and England’s Royal Ballet, which premiered it in 2011, and it’s been making the rounds ever since—Toronto, Japan, Los Angeles, Washington, D. C.—with mixed critical results. But, always, I’m sure, with happy box offices: Alice is many things, and potential cash cow is one of them. Of course, you could say the same thing, in perhaps a more generous spirit, about Balanchine’s Nutcracker.

How to consider this mammoth undertaking? I can think of three approaches: as a version of Lewis Carroll’s masterpiece; as a ballet in itself; as a spectacle. The first is the easiest. Although the incidents of the book are slavishly checked off one by one—as though audiences would picket if anything famous were left out—its essence is instantly obliterated by the decision to turn Carroll’s tough-minded, inquisitive, no-bullshit child into a love-smitten teen. There is no dishy gardener-turned-Knave-of-Hearts in what may well be the least romantic novel in English literature—the one most dependent on wordplay rather than love-play. So what we have here is Alice in Wonderland without Alice.

As a ballet, Wheeldon’s creation reflects his entire career as a choreographer. I can’t think of anyone working today whose results veer so drastically from original and persuasive to slack and vacuous. Because he’s giving us a love story, his main artillery is reserved for lyrical pas de deux—and we get them again and again. Or, rather, we get it: the same swoony passages keep turning up in the various lovey-dovey encounters that punctuate the three long acts. Wheeldon’s idea of romantic love is the rapturous lift—up goes Alice, time after time, hoisted above by the otherwise gratuitous Jack and arcing through the air. I hope she has her Dramamine with her. Wheeldon was doing exactly this same thing a dozen years ago in Carousel (A Dance), but Carousel has romance at its heart.

The choreography for Alice is purely generic throughout, but so is this conception of Alice. First-cast Jillian Vanstone is an attractive, appealing girl, and she’s a strong dancer—the entire Canadian company is strong—but she has nothing challenging to do: when she’s not overhead she just rushes around, smiling. Of Carroll’s wary, skeptical girl she shows not a trace.

The opportunities for the character dancers are somewhat greater. The Queen of Hearts (in the Prologue she’s Alice’s mean mom) gets to do a comic take on Carmen as well as a parody of the “Rose Adagio” from The Sleeping Beauty that would have been a lot funnier if it hadn’t been so vulgarly broad. But at least it was inventive. The Queen is a dance-up-a-storm role, and Greta Hodgkinson let herself rip. The White Rabbit (Carroll himself as a photographer in the Prologue and Epilogue) twitched and wiggled his way through the piece with just the right amount of camp from Dylan Tedaldi. The Duchess, the Cook, the Fish, the Frog, the tapping Mad Hatter, the bizarre March Hare, the pathetic Dormouse (“Suppress that Dormouse,” they cry in the book, and he’s duly suppressed) —they’re all recognizable and some of them are fun.

The group choreography—never a  Wheeldon strong point—is without surprises, ranging from a real mess of a Caucus Race (I couldn’t help thinking of what Jerome Robbins might have done with it) to a modestly witty romp for all concerned in the climactic trial scene. The ballet as a whole, though, simply isn’t a ballet: it’s a spectacle that’s been produced, not choreographed.

With spectacle, luckily, Wheeldon and Co. are on surer ground. The sets, the costumes, the special effects—these are the elements that come to life. I don’t much like the commissioned score by Joby Talbot—it’s large-scale, insistent, literal; danceable, but without any playfulness or delicacy to it. The designs are by Bob Crowley, a six-time Tony Award winner, and they’re consistently ingenious and fun, although the first-scene set—a beautiful painted vision of a country stately home—looks more like Downton Abbey than an Oxford deanery. Alice is sweetly pretty in her lavender dress and the de rigueur Alice headband. There are touches of real brilliance—the flamingos at the croquet game, each of them with one wing melting persuasively into a mallet; the huge red heart—it looks like vinyl—on which the Queen rides in triumphantly; an endless caterpillar whose segments are prancing girls. And finest of all—a thrilling conceit—the Cheshire Cat, who keeps coming apart and reforming itself, its many parts maneuvered by people in black in the mode of Japan’s Bunruku puppets. His climactic appearance as a gigantic head swaying above the multitude is a fabulous coup de théâtre, just as, in Wheeldon’s Cinderella last year, the transformation of the tree (a Basil Twist inspiration) was by far the most memorable moment—the only memorable moment.

Beggars can’t be choosers, and in the spirit of charity I think back overthe countless ballets I’ve seen that have no memorable moments. But this Alice is two hours and 45 minutes long. I gather that in London it was divided into two acts, the first running for 70 minutes or so, too long for the tot population to hang in there without a break. So it’s been re-structured into three acts—which means two long intermissions—and it seems interminable. It’s just not strong enough to sustain that much audience time. Wheeldon, or the Royal, or the Canadians, should have eliminated some dreary scenes (like the Rajah/Caterpillar number) and shortened the whole thing by 20 minutes while restoring the two-act structure. If they had, I could even imagine seeing it a second time … some day.

One of the oddities of the current fashion for retelling children’s stories in dance is the echoes from one work to another. In the Prologue to this Alice, the heroine is romancing a young gardener—a definite no-no in the pre-World War I world of Downton Abbey. (I mean the Deanery.) Jack is expelled from paradise. In the Prologue to Matthew Bourne’s Sleeping Beauty, which opened in New York last year in the same week as Wheeldon’s Cinderella, aristocratic Aurora is having it off with a young gamekeeper. And both ballets end with brief epilogues in which the class-crossed lovers are now modern kids, with no thought of social rank or status. Not only has loved prevailed, but so has democracy. Two great minds with but a single formulaic thought?

Are Wheeldon and Bourne the same person? No, but they share the same easy values. Wheeldon is more sophisticated, Bourne more upfront with his populist concepts, yet they reveal a similar emptiness. Bourne wandered, late, into ballet. Wheeldon has less excuse—he’s had the benefit of the Ashton aesthetic at the Royal, where he grew up (think of Ashton’s entrancing Tales of Beatrix Potter), and of Balanchine at City Ballet, where he danced and choreographed for 15 years. For him to prefer orchestrating blockbuster spectacle over advancing the art his talent suggests he was capable of leading is a sad story. We need choreographers, not entrepreneurs. 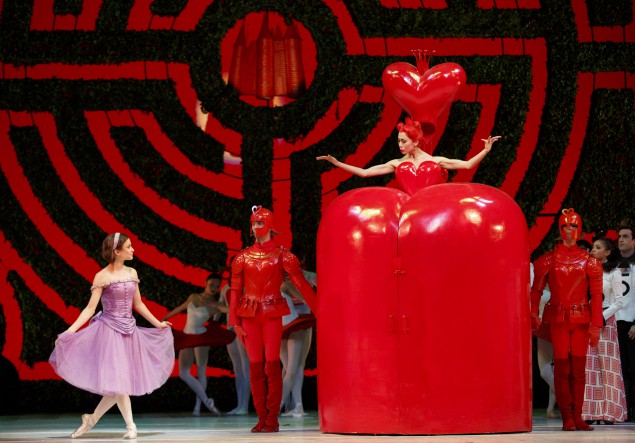 Filed Under: Dance, Dance, Ballet, Alice in Wonderland, The National Ballet of Canada