Liberal leaders long maintained that stop-and-frisk led to racial profiling, and most of the pols at today’s event minced no words in assailing the police unions, casting the appeal as a definite sign of ingrained prejudice.

“There is a blue wall of silence that exists in this city. That blue wall of silence is comprised of police officers and the police unions, that want to stop and to hide their institutionalized racism and homophobia that exists in the department and exists in this city!” shouted Ms. Mendez, the co-chair of the Black, Latino and Asian caucus. “Their policies as implemented disproportionately target people of color, they target the LGBT community and disproportionately target LGBT people of color!”

Ms. Mendez did not stop there, insisting there could be no possible other reason for the appeal than a desire to discriminate against blacks and Latinos.

“It can only be because they want to continue to propagate their institutionalized racism and we say it stops here!” said Ms. Mendez. “Most unions fight for social justice, these unions are fighting against social justice.”

Mr. Williams agreed, adding that the labor groups had falsely tried to persuade rank-and-file officers that Ms. Scheindlin’s decision would personally open them up to legal liability.

“What is happening here is a prolonged temper tantrum by people who wish to continue to flaunt and promote institutional racism,” he said. “To police officers: I’m sorry to say, but your unions are lying to you.”

Ms. Gibson, chairwoman of the public safety committee, also said the rally’s target was not the average officer.

Mr. Lander, Mr. King and Ms. Rosenthal echoed their colleagues, with Mr. King arguing that an arrest resulting from stop-and-frisk can ruin a young person’s life.

“It means more of our young brothers and sisters will be place in a database that will interfere with their ability to attend college and to obtain jobs moving forward,” said Mr. King, the other co-chair of the BLAC.

The Patrolmen’s Benevolent Association, the union representing police officers, argued that the police had been unfairly cut out of the conversation on stop-and-frisk reform–which the assembled electeds denied, noting that Ms. Scheindlin ordered law enforcement representatives to cooperate in planning reforms.

“We make no apologies for protecting our members from a decision that directly impacts how we do our jobs. The point of our challenge is to allow our members who protect everyone in this city regardless of race, creed or sexual orientation, to have a voice in the discussion of operational changes that will directly impact us and the work that we do,” said PBA President Patrick Lynch.

Former Mayor Michael Bloomberg had the city appeal Ms. Scheindlin’s decision last year, and a higher stayed her decision after determining she had violated rules of impartiality. Mayor Bill de Blasio, however, immediately dropped the appeal upon entering office in January. 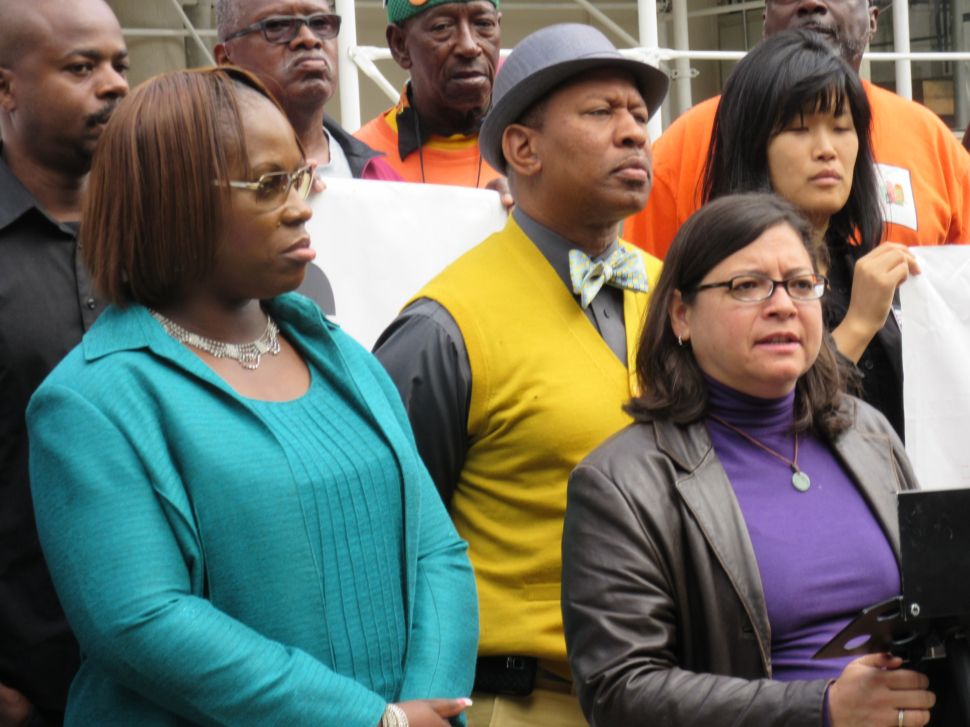