Yesterday’s 310,000-strong People’s Climate March pivoted left today, as hundreds of activists swamped the streets of the Financial District in a movement called “Flood Wall Street”–recalling the name, tactics and law enforcement clashes of the Occupy Wall Street movement of 2011.

Environmentalist demonstrators gathered in Battery Park City at 9 a.m. and marched on the famous Charging Bull statue at the corner of Morris Street and Broadway around noon. Gone were the numerous union members–from powerful labor groups such as the Hotel Trade Council, 1199 SEIU, 32BJ SEIU and the International Brotherhood of Electrical Workers–that helped organize yesterday’s event, as was any sign of support from the business community.

The banners raised said things like “Corporate Capitalism = Climate Chaos” and “Capitalism Has No Solutions To Climate Change,” apparently arguing that the climate march’s mission of pressuring the United Nations to create a strict emissions control treaty at its summit tomorrow is insufficient. The demonstrators closed down the streets with minimal interference from the few dozen cops on hand–who stood by as activists rearranged barricades–though the Observer witnessed two arrests take place, though no reason for either was given.

At 4 p.m., the Flooders marched on fortified Wall Street.

“People gonna rise like , gonna calm this crisis down. All your sons and daughters, gonna shut Wall Street down,” the demonstrators–a mix of 20-, 30-and 60- and 70-somethings–sang as they made their way up Broadway toward the famous financial center.

Police were ready with reinforcements, officers in riot gear, police vehicles and more barriers. As the protesters attempted to turn onto the corridor, the police pushed back, resulting in several minutes of intense shoving in which the Observer witnessed at least one officer use pepper-spray on an agitator.

“Who do you protect?” The protesters yelled in unison. “Who do you serve?”

After an apparent stalemate, the protesters sat in the street, and what followed could have been a scene from Zuccotti Park two blocks away and three years before–complete with call-and-response “mic checks,” chants about justice and peace, trombone and sax players and dancers on stilts.

“Remember the history of this place!” one young woman got up and shouted, the crowd echoing her every sentence. “It was named because there was a wall here built on the backs of African slaves. And today, we all live on a giant plantation!”

Meanwhile, two walls of cops closed off Broadway a block away in either direction. The action did not go unnoticed.

“The police are here, and they have batons, and enough zip ties for everybody!” yelled a young man in another “mic check.”

Organizers acknowledged the debt to Occupy, and a break from the inclusiveness of Sunday’s march–which promised in its subway ads to get “hipsters and bankers marching together.”

“Yesterday was more of a feel-good event,” said spokesman Goldi Guerra, himself a veteran of the 2011 protest. “The difference between yesterday and today is that yesterday worked within the system that’s destroying the planet. This is about getting out of that system.”

Others who put the event together argued that Flood Wall Street was a natural outgrowth of the People’s Climate March, pointing out that environmentalist Bill McKibben–whose 1989 book The End of Nature popularized the theory of global warming, and who envisioned yesterday’s cavalcade–spoke at Occupy Wall Street and has been a longtime critic of big business.

“He encouraged the ‘Flood Wall Street’ movement to make this connection between major corporations and climate change,” said organizer Elizabeth Press. “I think we have his blessing, even if it is not a direct extension of the People’s Climate March.”

Just like Occupy, today’s protests ended in arrests. Though the NYPD only confirmed three apprehensions, police reportedly as many as one hundred people into custody after night fell, including two women dressed as eco-friendly cartoon character Captain Planet and one man dressed as a polar bear.

There was relatively little resentment expressed toward police, who some argued helped the movement accomplish its mission by closing off the corridor.

“I want to thank the NYPD. It was the NYPD that shut down Wall Street,” said Mitchel Cohen, an organizer of the Brooklyn Green Party. 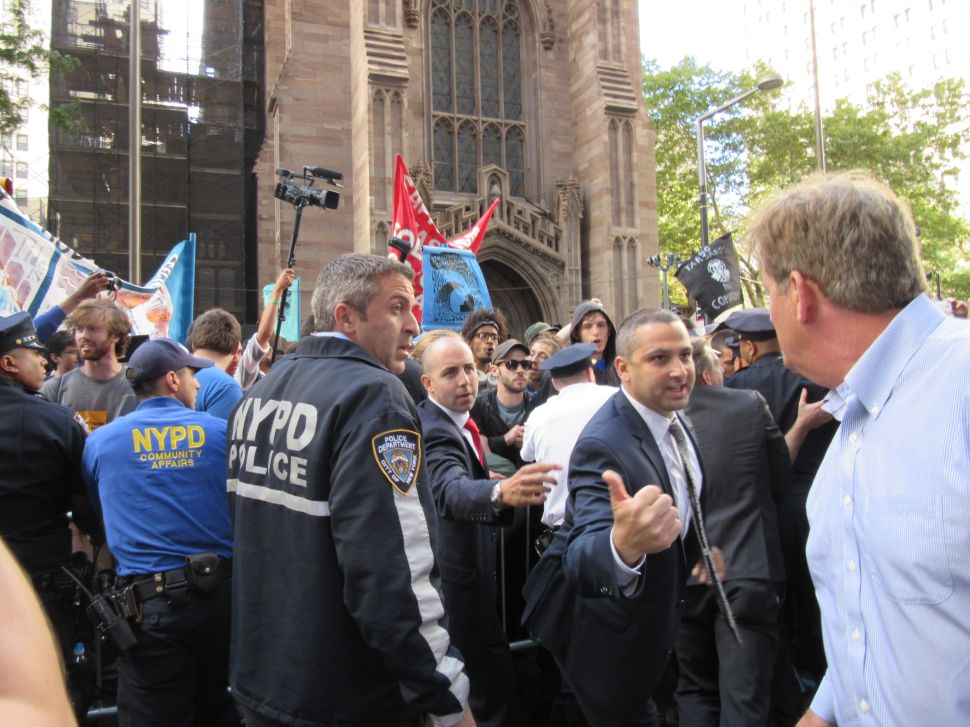