More than 310,000 people paraded through the streets of Manhattan to force world leaders to pay more attention to climate change, two days ahead of a United Nations summit–and among the marchers were Council Speaker Melissa Mark-Viverito and Mayor Bill de Blasio, who just hours earlier unveiled a plan to slash New York City’s greenhouse gas output by 80 percent by 2050.

Two hours before the procession, dubbed the People’s Climate March, began, the de Blasio administration released its proposal to slash the city’s output of greenhouse gases–the airborne elements blamed for observed changes in global weather patterns–by 3.4 million metric tons a year over the next 10 years, through the retrofitting of buildings for greater energy efficiency.

“The question today is will this be a historic moment, will it be a turning-point moment?” Mr. de Blasio told reporters after finishing his walk with the demonstrators. “Our mission is to make this a decisive moment.”

He argued that the protest had the potential to push the U.N. to create an international treaty for weaning the planet from fossil fuels–and that New York City could be the torchbearer for a cleaner-burning era.

“I felt today I was seeing history starting to be made,” Mr. de Blasio said. “We in New York City are trying to fuel that moment, that opportunity for profound change. The standards we have announced really put us on the forefront internationally.”

The mayor noted that his initiative would make New York City the largest metropolis on Earth to adopt the “80 by 50” goal. The plan calls for both publicly and privately owned buildings to be brought to maximum energy efficiency by 2025.

Mr. de Blasio said he hoped for landlords would accept the the incentives his plan would create and voluntarily alter their properties, but he left open the possibility of forcing their compliance.

“I think the private sector is ready and willing, I think they realize it’s in all of our interest, that this is a matter of survival. If that is moving fast enough, we will move to mandates, because we have to get there, it’s a matter of survival,” he said, adding he believed there was still time to avoid the disastrous environmental impacts most scientists have predicted. “We’ve lost a lot of ground, a lot of damage has been done, but it is not too late. What would make it too late is to continue on our current path, which is a path of madness.”

He said he believed that Hurricane Sandy’s devastation of many of the city’s waterfront communities had impressed the urgency of action upon the city’s citizenry.

“I think for New Yorkers Sandy made it personal, made it immediate,” the mayor said.

“It was a life-changing experience,” Mr. Richards told the Observer, adding that the disaster had brought the reality of climate change to his doorstep–and several feet higher. “Communities like the Rockaways could be wiped off the map by 2050 if we don’t make a change.”

“We want to build ourselves a greener future, for our families and our nation,” she told reporters. “New York City is a global city, everybody knows that the world watches whatever we do here and follows our lead.”

The city pols were not alone–former Vice President Al Gore, U.N. Secretary-General Ban-Ki Moon and French Foreign Minister Laurent Fabius also took part in the march. A group of youth from the Rockaways and Brooklyn’s Sunset Park neighborhood led the climate cavalcade, and a pro-vegan “Bus to Progress” brought up the rear.

In between were a huge number of union members, hailing from large and powerful labor groups like 1199 SEIU, 32BJ SEIU, AFSCME District Council 37, the Transport Workers Union, the Communication Workers of America, the New York State Nurses Association and the New York State United Teachers.

Also participating were the Green Party and its gubernatorial candidate Howie Hawkins, delegations from several colleges, environmental groups such as the Sierra Club and Natural Resources Defense Council, indigenous dancers in traditional garb and headgear, a number of out-of-state liberal organizations, activists from several foreign nations and a large complement of radical socialist and communist parties–all marching to the usual protest accompaniment of acoustic guitars, drums, horns and whistles.

Organizers said that 2808 sympathetic demonstrations occurred concurrently in 166 countries around the globe.

The only voice of dissent the Observer spotted was a single man walking in front of the demonstration carrying a tablet computer over his head, with the message “Socialism and Islam are Slavery” scrawled across the screen. 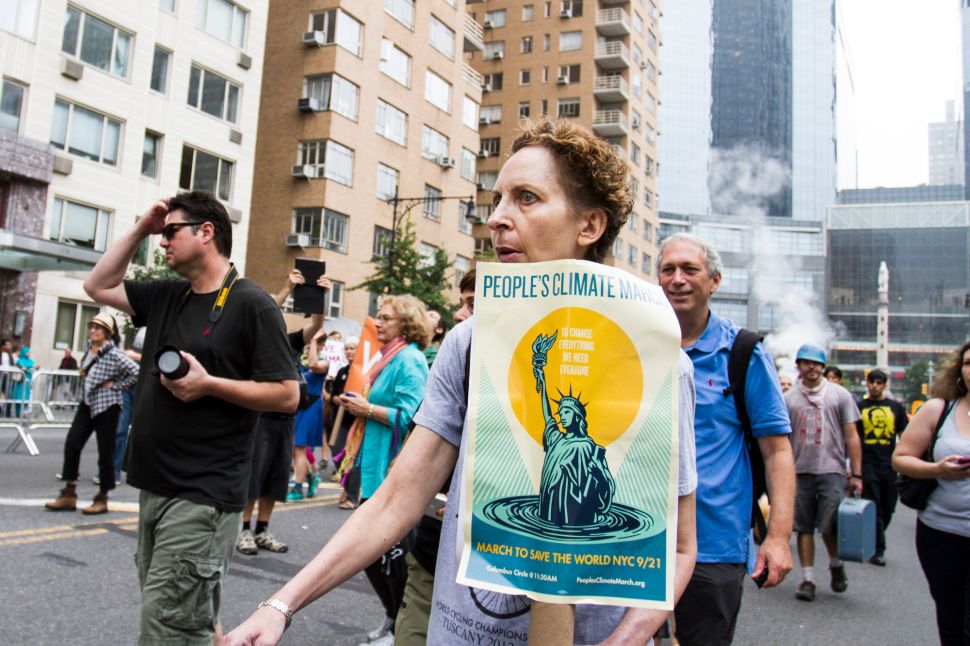