Update: The day this story went to press, the Observer learned that Vanessa Hudgens, star of High School Musical, will star in a Broadway production of Gigi.

A friend of a friend lives in the Theater District, near both the Cort and the Longacre theaters. Earlier this year, when Of Mice and Men was playing at the Longacre and The Cripple of Inishmaan was at the Cort at the same time, screams would erupt each night from opposite directions, amid the racket of Times Square, at which point this woman could tell whether James Franco or Daniel Radcliffe was exiting onto West 48th Street.

When told this story, Anna D. Shapiro, who directed Mr. Franco in Of Mice and Men, laughed. The Tony-winning director was sitting in her cozy dressing room at the Cort Theatre, where she had just begun tech runs of her second Broadway show this year, a revival of Kenneth Lonergan’s 1996 play, This is Our Youth. She’d been talking about the process of guiding Mr. Franco, Leighton Meester and Bridesmaids heartthrob Chris O’Dowd toward their Broadway debuts.

“The James thing was wild—I mean that was quite something,” Ms. Shapiro said, recalling Mr. Franco’s popularity among young theatergoers. “All his cast members teased the crap out of him. They called him Ringo, ‘cause it was like the Beatles.”

On Broadway, plays tend to bring in women over the age of 45. Ms. Shapiro watched Of Mice and Men bring in a different audience.

“[Broadway tickets] cost a bloody fortune, so if you’re going to hit up your parents,” she said, “aren’t you more likely to hit them up to see Ed Sheeran or somebody like that?” Ms. Shapiro talks with Mr. Cera and Ms. Gevinson at a This Is Our Youth rehearsal. (Photo by Joel Moorman)

Ms. Shapiro is used to being around stars. On the way to her dressing room we’d spotted Michael Cera and Kieran Culkin flitting through the alleyway beside the theatre, as well as Tavi Gevinson—tiny and impeccably dressed, of course—wandering around backstage.

Together, the trio comprises the entire cast of This is Our Youth, a play that chronicles 48 hours in the lives of three lost Manhattan teenagers in 1982. There’s Warren (played by Mr. Cera), a 19-year-old who’s just stolen $15,000 from his wealthy father; Dennis (played by Mr. Culkin), a drug dealer who helps Warren spend the money; and Jessica (played by Ms. Gevinson), an anxious young fashion student and the object of Warren’s desire.

The show ran from mid-June through July 27 at Chicago’s Steppenwolf Theater, where Ms. Shapiro is currently an ensemble member, before heading to Broadway, where it opens September 11. With its recognizable cast and relatable subject matter, the show brought in audiences younger than Ms. Shapiro could believe.

“At Steppenwolf, it was crazy,” she said. “Sixty percent of them had never been to our theater before.” Mr. O’Down and Ms. Meester in a scene from Of Mice and Men. (Photo by Richard Phibbs)

The number of teens posting Facebook statuses about going to see her shows is indeed amazing. Ms. Shapiro said her goddaughter “practically vomited from excitement” when she learned Ms. Meester was in Of Mice and Men.

Ms. Shapiro’s big-named casts don’t necessarily have the same effect on other Broadway performers, however, some of whom complain that after training in the theater their entire lives, they now have to watch the juiciest roles taken by Hollywood stars without the same background. Ms. Shapiro says she is aware of the issues.

“So many of my friends are actors, and so many of them are great, and they’re losing jobs to people who have never been in plays before,” she admitted. “I understand that sometimes I’m part of the problem. But I’m trying to figure out how to balance it.”

Ms. Shapiro grew up in Evanston, Illinois, a Chicago suburb that put her close the city’s theater scene. Ms. Shapiro’s mother, a “huge theater person,” was “taking me to plays since before I could sit through a play,” she recalled.

“Seeing parents bring their kids to [Of Mice and Men] was moving to me because that’s how I started,” she said.

She never wanted to be an actor, and in college studied film editing, but later decided filmmaking wasn’t for her.

“The more communal nature of storytelling for theater appealed to me,” Ms. Shapiro said. “There was a kind of solitude in filmmaking—at that point in my life, I don’t really think I had enough to offer as a singular voice.”

After college, Ms. Shapiro studied directing at the Yale School of Drama, then headed to Steppenwolf, where starting in 1995 she served in various positions. She also joined the Graduate Directing program at Northwestern University, which she currently heads.

Ms. Shapiro debuted on Broadway with August: Osage County in 2007. Besides her directing award, the show took home four more. In 2011, she directed The Motherf**ker with the Hat, Chris Rock’s Broadway debut, which earned six Tony nominations, including Best Direction.

For the production of Of Mice and Men, Ms. Shapiro, her husband and their 5-year-old twins relocated for a year to New York City, where they’re renting an apartment on the Upper East Side. Ms. Shapiro’s husband, Ian Barford, is performing in the upcoming Broadway production of The Curious Incident of the Dog in the Night-Time. Ms. Shapiro said her kids love hanging around the theater, pointing in her dressing room to shelves stocked with art supplies. According to Ms. Gevinson, Ms. Shapiro’s maternal energy made a difference during This is Our Youth’s racier scenes.

“My interactions with the other characters are related to romance and sex and love,” Ms. Gevinson said. “I felt more comfortable being directed through that by someone who’s a mom, and has certain intentions I wasn’t expecting in a director at this level.” “A lot of directors see actors as puppets,” she continued, “like, ‘How do I position these people to get across the story I’m trying to tell?’ With Anna it’s more collaborative.”

Ms. Shapiro alters her approach when working with a star who’s new to Broadway, or in the case of someone like Chris Rock, new to theater, period.

“There are times when you’re working with film people when you have to say, ‘If the camera were on you, what you’re doing would be perfect,’ ” Ms. Shapiro said. “‘You need to move it down into your body, because I don’t have access to your face.’ ”

It should be noted that Ms. Shapiro isn’t necessarily responsible for casting big-name celebs. Some projects come to her with stars already attached, as was the case with Mr. Franco, Mr. Cera and Mr. Culkin.

But Ms. Shapiro’s experience with the Hollywood-comes-to-Broadway formula has also helped her soothe potential jitters, according to Ms. Gevinson.

“She just keeps the focus on telling the story, and Kenny’s writing, and giving these characters lives people can be invited into for a two-hour period,” she said, as opposed to “‘critics will be here’ and ‘your name will be on the marquee.’ ”

“I personally think Broadway has always been a stars’ medium,” theater producer Robert Driemeyer told the Observer. “I think the difference between the previous era and now [is that] Broadway [today] doesn’t make or generate its own stars. So you go to Hollywood and you bring them in.”

But shows don’t find success just because a director slaps a Hollywood star on the stage. As Mr. Driemeyer explained, a play’s resonance depends on finding the “intersection of art and commerce.” In other words, don’t put something on stage without factoring in audience appeal. Likewise, don’t cast a big Hollywood name solely for the name. Ms. Shapiro and Mr. Lonergan at a This Is Our Youth rehearsal. (Photo by Joel Moorman)

And as Mr. Driemeyer points out, having a star in a show is often the reason other actors get jobs; some shows wouldn’t even get produced without the presence of a recognizable name to lure in investors.

Still, Ms. Shapiro gets it if people find her shows a turn-off:

“There are people for whom the idea of James Franco and Chris O’Dowd in Of Mice and Men is like a Saturday Night Live sketch. This is a hard business, you know? I just feel like I owe it to everybody to help them be the best they can be, so that everybody knows they totally deserve to be up there.”

In her dressing room, Ms. Shapiro hurriedly finished off a dragon roll and a seaweed salad. She’d have to get back to rehearsal soon, where she’d be until 10 p.m.

“I just want to steam through, and I try not to eat poorly so I have energy,” Ms. Shapiro said. “A lot of designers can go to dinner and have a [drink] and work in the evening. I can’t. I’m like full steam ahead, just doing the thing.”

Next, she’ll be jumping in to direct Larry David’s first Broadway play, Fish in the Dark, which is slated to open next March. The play is “a comedy about a death in a family, with about 15 characters,” The New York Times reported in August.

“I’m going to have a blast this year, enjoy New York, enjoy being with my kids and my husband, and do one more show in the spring,” Ms. Shapiro said, referring to Fish in the Dark. “And then we’ll go home [to Chicago]. The promise I made to myself is that when my kids started kindergarten, I was gonna take a break.”

Is there an actor she still longs to work with? A play she’s secretly dying to direct? 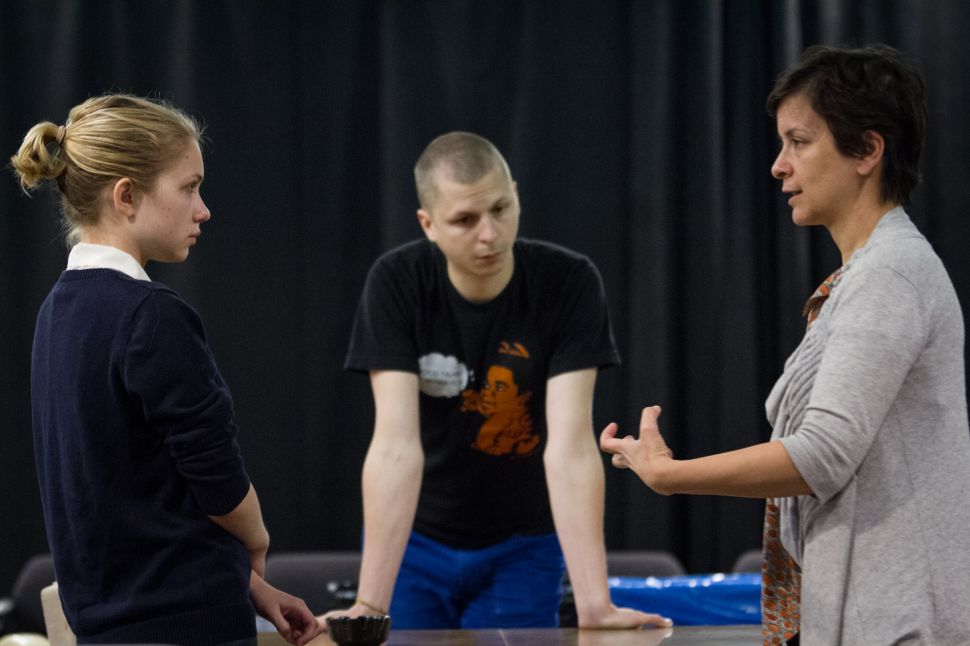